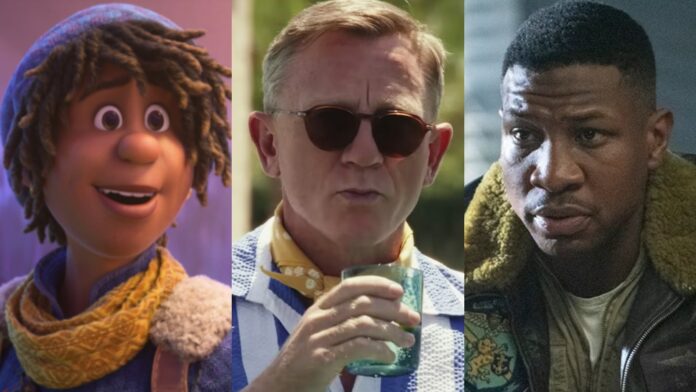 The Awards Audit is a weekly column at Next Best Picture where we dive into the financial performance of this year’s Oscar contenders and analyze how their results impact their prospects for this awards season. On this week’s Awards Audit, a bounty of awards hopefuls experienced a feast of support or famine of ticket sales from holiday audiences.

It’s no secret that Netflix boasts a checkered history of flirtations with the theatrical marketplace, including nationwide releases for blockbusters like “Red Notice” and “The Gray Man” that received little audience support. This time, the streamer made a more calculated gamble with the long-awaited sequel to the 2019 hit “Knives Out,” “Glass Onion: A Knives Out Mystery,” and it paid off in spades.

Despite a limited 696-theater run, “Glass Onion” devoured amongst a crowded Thanksgiving marketplace. The film boasted an awe-inspiring $13,505 per-theater average, building upon the first film’s success with a fresh cast and a unique whodunit mystery. Rian Johnson’s latest whodunnit mystery also scored the best debut of all time for a streaming effort – a fact made all the more glaring by streamers’ questionable history of not reporting their box office totals.

The success of “Glass Onion” is the ultimate double-edged sword for Netflix. While they are likely patting themselves on the back for their $400 million acquisition of the “Knives Out” franchise, a strong debut begs the question – why not embrace a more aggressive theatrical rollout? Currently, Netflix plans to pull the film from theaters this week ahead of its Netflix debut on December 23rd. I know Netflix is notoriously protective of its streaming model. Still, a debut this good might force the streamer to reconsider the viability of ignoring theaters and leaving easy profits on the table.

If Netflix is smart, they will decide to extend “Glass Onion’s” theatrical run and expand the film into additional theaters. Still, I am sure corporate politics will block that decision. Either way, “Glass Onion” should implore Netflix to embrace theaters rather than viewing them as direct competition. Who knows? Maybe an extended theatrical run could bolster the film’s awards chances? Next Best Picture currently predicts a Best Adapted Screenplay nomination for “Glass Onion” (ranked 3rd). However, a surprise Best Picture run is not out of the question, considering the film’s buzzy reactions from critics and audiences. Additional nominations for Janelle Monae in Best Supporting Actress (ranked 8th by NBP), Best Film Editing (ranked 6th by NBP), and Best Production Design (ranked 9th by NBP) are not out of the question.

In what is considered a rare flop for the Mouse House, Disney Animation Studios’ “Strange World” may have opened in second place behind the studio’s Marvel sequel “Black Panther: Wakanda Forever” (which grossed a whopping $45.9 million), but the overall number was seen as a huge disappointment considering the last year’s “Encanto” opened to much larger numbers in a tumultuous time for theaters during the pandemic, with wide accessibility on Disney+. “Strange World” took in $11.9 million for the three-day weekend and $18.6 million overall through the five-day Thanksgiving holiday. While better than “Raya and the Last Dragon,” this is still a massive failure for the animation studio. With a price tag anywhere from $135-$180 million, the studio is expected to lose over $100 million over the project when all is said and done. This may affect its awards chances since Best Animated Feature is stacked with terrific options to choose from this year (it’s currently ranked 6th by NBP). With the industry-shaking announcement that Bob Iger would be returning as Chief Executive Officer of Disney to replace Bob Chapek earlier last week, hopefully, this is not indicative of a trend, and the studio will bounce back.

Neither “Devotion” nor the “The Menu” stood a chance at garnering significant awards support, but both releases highlight the grim realities facing adult-centric films. Despite bolstering a $90 million budget, friendly comparisons to the box office behemoth “Top Gun: Maverick” (including sharing a star, Glen Powell), and a high-flying premise, “Devotion” received little aid in its theatrical debut. The biopic about two of the Korean War’s most celebrated aviators is the type of epic feature that typically receives support from adult crowds. Even with abysmal reviews, 2019’s World War II title “Midway” grossed $56.8 million domestically and $127.4 million worldwide before the pandemic. Three years later, “Devotion” runs headfirst into the narrowed demand for adult-oriented features.

One of the few adult-oriented success stories over the holidays has been Mark Mylod’s “The Menu.” The film scored distributor Searchlight Picture’s best nationwide debut in over a decade while only declining 42% in its second weekend. That said, the film is shaping up to be a modest success at best for Searchlight, given the title’s $30 million budget. Unfortunately, even the adult-targeted titles scoring positive headlines do so with their fair share of caveats adding to the increasing alarm about where the marketplace is heading long-term.

Financially, “The Fabelmans” is a modest enterprise for distributor Universal. I’ve seen some label the film’s mid-sized nationwide expansion this weekend as an outright disaster, but a $3,479 per-theater-average is nothing to scoff at over the competitive holiday frame. I am okay with Universal’s more patient rollout because awards season is less of a sprint and more of a marathon. Universal should be well-positioned to keep the movie relevant across December as long as the film doesn’t fall off the cliff during next weekend’s quiet slate.

Will the film ever become a smashing success? That is a trickier question to answer. An autobiographical feature on Spielberg is not the easiest sell outside of diehard film fans, but the film does boast enough sentimentality and awards heat to reach broader demographics. The answer may not be immediately apparent. Still, I would wait before signaling any panic alarms, especially in the aftermath of the director’s disappointing box office haul for his Best Picture-nominee last year, “West Side Story.”

Distributor United Artists Releasing made a bold gamble in expanding their cannibal love story, “Bones and All,” in national markets. Unfortunately, the risk paid off differently than intended, with a paltry $808 per-theater-average ranking as the worst tally across the Top 10. To be fair to United Artists, Luca Guadagnino’s latest film boasted niche appeal at best, but it’s evident that over a weekend when families were eating good food at home and had an array of options to feast on in the theater, they mostly avoided the film that involves people eating other people. This expansion is a situation where the studio wanted to maximize their immediate profits for a title they knew would not break the bank in the long run. The film’s gruesome premise and insular undertones are unlikely to connect with award voters outside of critics’ organizations. However, there is still a slight chance David Kajganich’s adapted screenplay could become a stealth contender (currently ranked 8th by NBP).

Tumbling out of the Top 10 into eleventh place, Maria Schrader’s “She Said” continues to flounder financially. While the film boasts substantial merit in spotlighting the start of the #MeToo movement, the takedown of Harvey Weinstein and highlights the importance of women’s voices, journalistic features (and pretty much all awards season titles this year) remain a tough sell at the box office. Some have speculated if the film’s lackluster box office totals will impact its award prospects, but when almost every other awards season title is experiencing similar middling box office returns, that argument starts to break quickly. What matters more is how voters will emotionally respond to the film. The glowing critical appraisals should still help as the film battles for a Best Picture nomination (on the cusp of joining NBP’s ranked 10), while the film is widely expected to score nominations for Carey Mulligan in Best Supporting Actress (ranked 3rd by NBP) and Best Adapted Screenplay (ranked 4th by NBP).

Here’s what audiences have to look forward to next weekend…