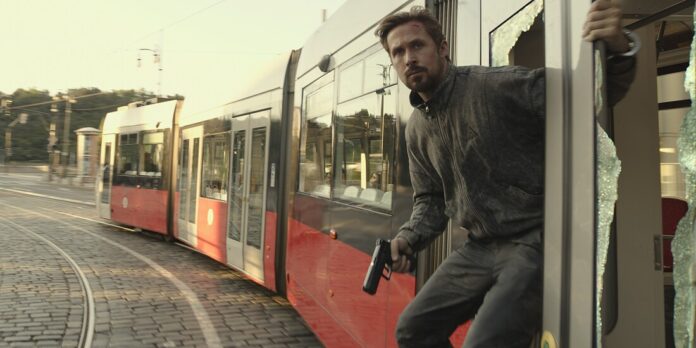 ​From Marvel directors Anthony and Joe Russo (“Avengers: Infinity War” and “Endgame“), “The Gray Man” (Based on the novel of the same name by Mark Greaney) is the most expensive film ever produced by Netflix. Wanting to capture the same lightning in a bottle as other globe-trotting, action-packed assassin/spy films such as “Mission: Impossible” or “John Wick,” the movie, much like its two lead characters, is relentless and uncompromising in the pursuit of its goal to make this the next big blockbuster franchise. Following the abysmal disappointment that was “Cherry,” the Russo Brothers are a more natural fit for this type of story, giving “The Gray Man” a “spare no expense” approach that makes it an acceptable piece of popcorn entertainment, even if it can’t rise to the higher level of those other well-established action franchises.

Inmate Court Gentry (Ryan Gosling) is serving his prison sentence in Floria when one day he’s approached by retired CIA director Donald “Fitz” Fitzroy (Billy Bob Thorton) and offered to come work for the CIA as a trained hitman. It will get him out of prison, but the deal is indefinite as the story hops forward 18 years later, where Court, now going by the codename, Sierra Six, is one of the CIA’s most deadly operatives in the top-secret Sierra Six program. Working alongside a kick-ass, skillful, and tough female operative Dani Miranda (Ana de Armas), Six completes a mission where the target reveals to him before dying that the CIA, now led by the ruthlessly ambitious Group Chief Denny Carmichael (Regé-Jean Page) is covering his own corrupt tracks and sending agents from the Sierra program to kill other agents. Could Six or Dani be next? The answer is yes, as Carmichael brings in Lloyd Hansen (Chris Evans), an extremely effective assassin and former CIA recruit with a flair for theatrics, zero impulse control, and a propensity for unauthorized torture. With unlimited resources at his disposal and “Deputy” Group Chief Suzanne Brewer (Jessica Henwick) sent in by Carmichael to babysit him, Lloyd will stop at nothing, even if it means targeting Fitz’s niece with a serious heart condition (“Once Upon A Time In Hollywood’s” breakout young actress, Julia Butters), harming innocent civilians as collateral damage or bringing in other assassins from all over the world (including world-renowned Indian actor Dhanus) to complete the hit on Six and retrieve a special asset he’s carrying which could bring down Carmichael.

With a blank check given to them by Netflix, the Russo Brothers are as determined as Six and Lloyd to fulfill their mission: to create the next blockbuster action franchise. Even though the screenplay contains several silly moments (the opening scene sees two characters exchanging clear and perfectly understood dialogue right next to a massive fireworks display) with the kind of lines that a fifth grader could’ve come up with (“He’s a bad guy”), the Russo Brothers deliver where they needed to the most, and that’s with the film’s action. One particular sequence in Prague is littered with bullets, carnage, and destruction as the local police get involved in Lloyd’s pursuit of Six, leading to a ton of collateral damage in the process. While Lloyd does not care who the mission impacts, Six does, and this key difference between the two men is not only what sets them apart but makes them perfect foils for each other as the screenplay pushes them towards their ultimate confrontation in the third act. By the time we get to witness the stoic Ryan Gosling taking on a charismatic Chris Evans in a hand-to-hand fight scene, the groundwork has been laid well enough by the Russo Brothers that you can’t help but get caught up in the sensation of seeing these two Hollywood stars duke it out in a battle of wills.

Ryan Gosling has been absent on the big screen since 2018’s “First Man,” and the Russos have perfectly cast him as an emotionless, formidable, and highly experienced assassin. Sure, he’s played the apathetic tough guy in films such as “Drive” and “Blade Runner 2049” before. Still, you’ve never seen Gosling this physically committed (or this buff) to a role before as he runs, shoots, fights, and jumps through every obstacle thrown in his path with a deft level of tactical precision. The plot moves at a fierce pace but with enough time to slow down to allow these A-list actors to shine, most notably Chris Evans. As the tight polo-wearing, unstable lunatic with a chillingly calm demeanor when he feels like he’s in control, you can pretty much tell Evans is having the time of his life playing a wickedly charming psychopath who answers to no one. This especially conflicts with hired assassin Avik San (Dhanush), who is brought in to take out Six and almost succeeds in doing so, but his character takes a turn when the honorable man sees how unhonorable Lloyd is. Ana de Armas is also given the opportunity to expand on what she showed she was capable of in last year’s “No Time To Die,” but with more screentime as Dani reluctantly helps Six evade capture from Lloyd. She holds her own in a number of set pieces alongside Gosling and Evans, proving that she is one hell of an on-screen badass when given a chance. Alfre Woodard makes her presence felt with a brief appearance as the former bureau chief who aids Six in Prague, but this movie could’ve given her more to do, or at least equal the amount of material Billy Bob Thorton was given, considering his character, too has a history with Six.

While everyone involved will want you to believe due to the star-power and the high price tag that “The Gray Man” is the next great action film of our time, it’s held back by its ludicrous script, which never presents its story or its characters in an intelligent manner. The forced humor also never helps despite the actors’ best efforts to provide color to their gray characters. But that’s not what most people will watch the Russo Brothers’ latest for. They came to see action, told on a large scale, and considering the amount of huge location title cards that flash across the screen, the Russo Brothers, Netflix, and the cast probably feel they have produced exactly that. The fight choreography is pretty decent, with first-rate stuntwork as the Russo Brothers glide their camera across the various sets to capture the sweeping scope of the story. The characters are easily identifiable, with little effort required from the viewer to immerse themselves in the spectacle of watching assassins travel the globe to accomplish their goals. There is some unfinished business to attend to once the credits roll, which will most likely lead to a sequel. Is it warranted? Probably not, as “The Gray Man” lacks the fun of the “Mission: Impossible” movies and the brutal but beautiful simplicity of the “John Wick” movies. But considering the amount of money Netflix has already invested in this film, expect the aggressiveness of “The Gray Man” to continue.