“THE HARDER THEY FALL” 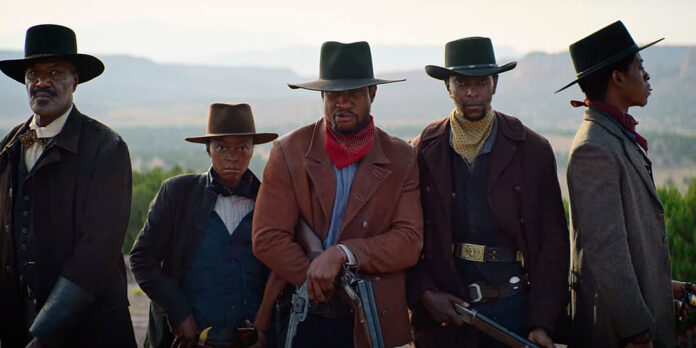 So says the opening text for Jeymes Samuel’s “The Harder They Fall,” a stark and succinct reminder that, despite the Western’s efforts to prove otherwise over the past few decades, Black people did, in fact, have a formidable presence in the Wild West – and it’s about damn time their story got told too. When watching Samuel put his own spin on a well-worn genre, it’s clear from the start that he’s not confined by the conventions of what’s come before – he’s inventing a whole new cinematic language with every passing scene, one full of style, swagger, and soul that has never been showcased in a story like this, making you feel as if you’re not just watching a revitalization of a classic categorization of film but an entirely original genre that takes on a life of its own before your very eyes. It’s explosive, eccentric, and, above all else, it’s enormously entertaining. It highlights the very best that can happen when we give new voices a chance to spotlight their culture in cinema, breathing life into old odysseys once thought dead and dormant.

This riveting tale of revenge and redemption (literally) kicks off with a bang, as a young Nat Love (Chase W. Dillon) sees his mother and father get gunned down by the brutal outlaw Rufus Buck (Idris Elba), while Buck’s accomplice carves a cross into the little Love’s forehead as a reminder of this familial ruination. Years later, an adult Nat (Jonathan Majors) – now an outlaw-of-sorts himself – completes his crusade of retribution, picking off Buck’s partner-in-crime and hoping to finally settle down and leave his wild ways in the past, especially since Buck himself has already been brought to justice and thrown in jail. However, a reunion with his on-again-off-again lover Stagecoach Mary (Zazie Beetz) is interrupted when Love’s gang hears word that what’s left of the Buck gang – now led by the terrifying Trudy Smith (Regina King) and the equally chilling Cherokee Bill (Lakeith Stanfield) – are planning to break their pal out of prison and cause some more mischief – something Nat certainly can’t have. With his own gang – comprised of Mary, the buoyant Jim Beckwourth (RJ Cyler), pensive Bill Pickett (Edi Gathegi), and capricious newcomer “Cuffee” (Danielle Deadwyler) – Love sets out to make Buck pay for what he did all those years ago and make peace with his parents’ demise, once and for all.

Right from the petrifying prologue in which 10-year-old Nat bears witness to his mother and father’s murder, it’s apparent that Samuel isn’t messing around, completely capturing the chaos of the Wild West climate and making his directorial predecessors in this genre proud, establishing a staggering sense of setting with his daring direction and the drama’s tense tone. He’s aided admirably by an astonishingly talented crew, with the sound team genuinely working at the top of their game to nail the sonic stimulation of every gunshot and blood splatter and editor Tom Eagles expertly infusing the epic with an edgy energy that immediately assures that this isn’t your daddy’s Western. From the way the cast is so coolly introduced over the opening credits with quick cuts to each character’s silhouettes accompanied by the actors’ names (all set to a raucous original rap song by Jay Z) to the swift shifts in perspective during each stupendously suspenseful action sequence, Eagles provides the film with a fierce ferocity that will fascinate even non-Western fans, as every audience member will be unable to take their eyes off the enrapturing anarchy unfolding before them, diligently directed by Samuel. And, despite all the effort that clearly went into cultivating this sharp and slick aesthetic, “The Harder They Fall” never has to convince you that it’s “cool.” It simply just is.

Much of this is also due to the captivating commitment of the entire excellent ensemble, lively led by the magnificent Jonathan Majors in yet another sensational star turn. Anyone who has seen Majors’ poignant supporting performance in “The Last Black Man in San Francisco,” calm and collected characterization in “Lovecraft Country,” or chaotically charming cameo in this year’s “Loki” knows that the man is a true talent with tremendous versatility. He’s found yet another role to wholly disappear into here as the stubborn, sexy, and sensitive scoundrel Nat Love. While at times he’s a conventional charismatic, cajoling his way out of conundrums with a sly smile and witty wordplay, at other points, Majors lets us see the broken boy within, still reeling from the sudden loss of his beloved parents and blinded by rage for Rufus Buck. Still, despite all this storminess, there’s honor within Nat Love, and Majors wisely accentuates this attribute to set him apart from Buck. He has no problem dispatching of deviants who do wrong but’s no mindless murderer either; he believes in fairness first or foremost, and if he needs to take the law into his own hands in order to see to it that some sinner is held accountable, so be it.

Majors is accompanied by a murderer’s row of monumental masters of the craft, most notably the indomitable Idris Elba as his main adversary, Rufus Buck, and an ever-entrancing Regina King as his wiry right-hand woman, Trudy Smith. Though there are long stretches of the story in which Elba is physically absent, it’s a true testament to his sensational screen presence that his ferociousness is still felt in every frame. And yet, the best part of his portrayal of Buck is a tragic twist in the third act best left unspoiled, which redefines the ruffian and allows Elba the chance to assert his oft-overlooked strengths as an actor. King is, of course, a fearsome force to be reckoned with the whole way through, turning Trudy into a terror on par with the riotous Rufus, playing up her shiftiness and smarts as the perfect complement to Buck’s strength. By comparison, Stanfield’s Cherokee Bill can’t help but feel a bit less frightening (as it seems like Elba and King fit the time period better), but he’s serviceable all the same. The stars in Love’s gang are certainly no slouches either, with Beetz having bright chemistry with Majors during their romantic rendezvous and Cyler and Deadwyler bringing considerable comedy to their cowboy gang, as the former’s rowdiness and the latter’s deadpan reactions are both equally amusing.

Although a new community is being centered in this specific story, some could say that “The Harder They Fall” is still treading familiar thematic territory (concerning the never-ending cycle of violence) with not much new to say. There are a few lulls here or there in the second act (where Beetz’s Mary is, unfortunately, “damsel’d” and the rest of the gang has to go on what feels like a bit of a “side quest”), but these are incredibly minor critiques in a film this terrifically thrilling and handsomely helmed. From start to finish, “The Harder They Fall” is a riveting rollercoaster ride chock-full of compelling characters, aggressive action, and a decent dose of dynamic drama to give it that extra emotional “oomph” in the final stretch. In trying to offer a thoroughly Black take on the Western genre, writer-director Jeymes Samuel not only pays his respects to the pictures of the past but also redefines what the Western means in modern-day moviemaking. And, when it’s over, you’ll be left wondering why we haven’t seen such a saga sooner.