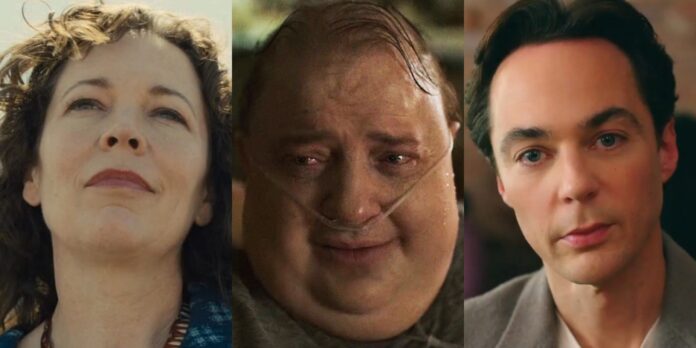 The Awards Audit is a weekly column at Next Best Picture where we dive into the financial performance of this year’s Oscar contenders and analyze how their results impact their prospects for this awards season. For this week, one of the season’s marquee contenders recorded a smashing debut in limited release, while another quietly bowed out of its theatrical run and is set to make its way toward VOD.

Ahead of the film’s video-on-demand debut on December 13th, “The Fabelmans” stretched to an additional 335 theaters amidst no new nationwide releases. The slight expansion allowed Steven Spielberg’s latest Oscar contender to decline only 7% from last weekend, although a $1,212 per theater average marks a noticeable drop from last weekend’s $2,036 average.

I remain mixed on distributor Universal’s ongoing strategy for director Steven Spielberg’s autobiographical passion project. The slow and steady theatrical approach akin to past Best Picture contenders, like “Birdman” and “12 Years A Slave,” is worthwhile on paper. However, the sudden VOD release of “The Fabelmans” will likely cut the film’s theatrical legs in the coming weeks. It would have been fascinating if the film ditched the accelerated theaters-to-streaming pipeline in favor of a more traditional, pre-COVID-19, arthouse rollout. Instead, the film will likely fail to retain theaters ahead of the busy holiday season.

So far, “The Fabelmans” continues to perform with modest yet unspectacular results in mainstream markets. A final domestic total in the $20-$25 million range is possible if the film lingers in theaters over the next few months. Still, it’s certainly not the crowdpleaser Universal likely hoped for when factoring in its $40 million production budget.

Even with disappointing financial returns, “The Fabelmans” remains one of this year’s prominent award contenders. NBP is currently projecting the film as the favorite to win Best Picture and Best Director, while nominations for Best Actress contender Michelle Williams (ranked 4th by NBP), Best Supporting Actor contenders Paul Dano (ranked 4th by NBP) and Judd Hirsch (ranked 5th by NBP), and Best Original Screenplay (ranked 2nd by NBP) seem likely along with a ton of below the line nominations. Only time will tell if the film will maintain its frontrunner status despite its struggles to connect with mainstream audiences.

Distributor Focus Features also took advantage of the quiet mainstream slate with its 777 theater expansion of the LGBTQ+ dramedy “Spoiler Alert.” I applaud Focus for taking a chance with the Jim Parsons-led vehicle. The recent success of romantic comedies, such as “Ticket To Paradise” and “The Lost City,” certainly shows theatrical viability for the long-ignored genre. Glowing critical reviews (a robust 82% Rotten Tomatoes score) and the film’s lingering buzz as a potential Golden Globe contender are also worthy marketing tools.

Unfortunately, “Spoiler Alert” did not gain much traction in its expansion. A middling $894 per theater average is neither a disaster nor a success story for Focus. The film will likely retain its national markets for one more weekend ahead of the upcoming blitz of holiday releases. While the results differ from what Focus intended, the distributor deserves praise for continuing to provide arthouse titles to the marketplace when many studios are shifting away from that tradition. I hope readers realize the importance of supporting titles like “Spoiler Alert” just as much as publicized Oscar contenders.

The shining specialty release success story of this weekend, and the year so far, is distributor A24’s latest, “The Whale.” Following a publicized festival run that garnered star Brendan Fraser his status as a Best Actor Oscar contender (currently ranked 3rd by NBP), “The Whale” earned the best specialty debut of the year with a remarkable $60,000 per theater average. That tally passes “Everything Everywhere All At Once” for the 2022 per theater average crown (a $50,130 in its ten theater debut). Additionally, “The Whale’s” debut performance featured the second-best per-theater average since 2020, only trailing the high-profile release of Paul Thomas Anderson’s “Licorice Pizza” ($86,289 in its debut) in 2021.

Going into its opening weekend, the Darren Aronofsky-directed film was an intriguing box office proposition from A24. The independent distributor shrouded the movie in mystery through its minimalist marketing campaign and relied mainly on the groundswell of momentum that Fraser’s lead performance continues to rally.

Fortunately, A24’s strategy is working wonders so far. They continue to find box office success in the challenging post-pandemic marketplace due to the studio’s incisive ability to cultivate momentum through buzzy social media marketing. Titles like “Bodies Bodies Bodies,” “The Green Knight,” “Everything Everywhere All At Once,” and now “The Whale” forwent the taxing expenses of traditional marketing campaigns and carved profitable box office results from that decision. It’s a joy seeing A24 continue to find prosperity as the theatrical marketplace only continues to get more constraining.

“The Whale” will continue to expand next weekend before a nationwide rollout of about 500 screens on December 21st, according to Deadline. The film’s ability to connect with mainstream audiences will likely play a significant factor in its contention for other award categories, such as Best Picture (ranked 10th by NBP) and Best Supporting Actress for Hong Chau (ranked 4th by NBP). In addition, it will be intriguing to see if the film’s mixed critical appraisals impact further expansions (“The Whale” is currently sitting at 67% on Rotten Tomatoes).

Distributor Searchlight Pictures debuted Academy Award-winning director Sam Mendes’s new film “Empire Of Light” in a semi-nationwide platform release. It’s an atypical strategy for sure, but it does make some sense to avoid a strict specialty rollout considering the film’s divisive reviews (45% on Rotten Tomatoes) and diminishing award prospects. Currently, Cinematographer Roger Deakins is the film’s best award contender and is ranked 5th by NBP in that category.

Despite the mixed reactions, “Empire Of Light” performed decently with a $1,454 per-theater average in its semi-national release. Searchlight plans to expand the film nationwide to 600-700 theaters on December 23rd. My expectations are slim for its expansion when factoring in the formidable presence of “The Whale” and the debut of other award-hopeful titles, like “Babylon” and “I Wanna Dance With Somebody.” It’s looking bleak out there for any film at the moment not featuring blue aliens on a planet called Pandora.

Do you like this new column? We appreciate your feedback on our previous box office columns, which is why we’re delivering this new analysis to track how this season’s awards contenders are doing at the box office. Is there anything you would like to see in future posts? But also, please tell us what you saw this weekend and what you thought of it. What will you be seeing next weekend? Please let us know in the comments section below or on our Twitter account.