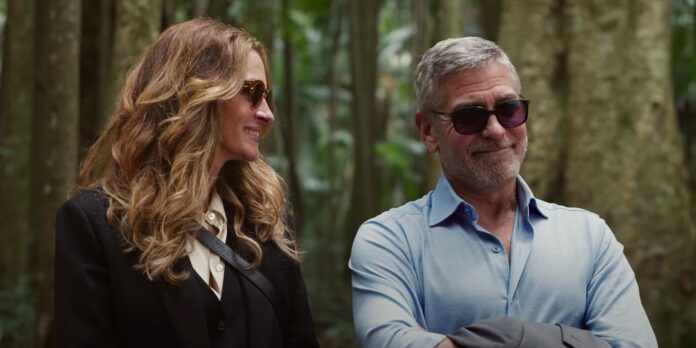 THE STORY – A divorced couple teams up and travels to Bali to stop their daughter from making the same mistake they think they made 25 years ago.

Summer may be over, but that may be the perfect excuse to enjoy one last vacation away. With the gorgeous backdrop setting of Bali and the combined leads of George Clooney and Julia Roberts, “Ticket to Paradise” is the latest film release in a year, proving to bring back the classic rom-com. After a tough few years with lockdowns and tragic news plastering our screens, sometimes all we need is a few hours of light entertainment and unrealistic love stories. From “Marry Me” to “The Lost City,” these films can make us believe in the unbelievable just for a small moment. That’s what I need right before a cold winter kicks in, and that’s exactly what “Ticket to Paradise” presents.

After graduating, Lily (Kaitlyn Dever) and her friend Wren (Billie Lourd) decide to vacation to Bali before continuing their studies. While on holiday, Lily falls in love with local resident Gede (Maxime Bouttier), a seaweed farmer. When her two divorced parents, David (George Clooney) and Georgia (Julia Roberts), hear from their daughter that she plans to stay in Bali and marry Gede, they both catch a flight and decide to work together to sabotage the wedding to stop Lily from making the same mistake they once made.

The main reason for seeing “Ticket to Paradise” is for Clooney and Roberts, who are as good as you can imagine. Rom-coms only work when there is a natural chemistry between the love interests, and it’s so easy to see that charm and spark between the pair. Even through the most cliché dialogue, their delivery of the lines is smooth and irresistible. The film is packed with so many singular moments between Clooney and Roberts that will guarantee laughs in a packed theatre, from swapping hotel rooms to playing beer pong with their daughter’s fiancée. Their relationship on-screen endearingly develops throughout the story, and their second chance at love becomes the most believable and compelling part of this entire narrative.

In contrast, the relationship between Lily and Gede is rushed, partially because of the story’s plot. It’s clear that David and Georgia are worried about their daughter choosing this path, and that’s a very reasonable stance to take. However, the film doesn’t do enough to convince the audience that Lily is making the right decision by staying with Gede, and that’s due to a lack of development within their relationship. This isn’t the fault of either actor, as they can only do as much as the screenplay offers, but their characters start to feel one-dimensional as the film continues. There could have been a compelling sub-plot regarding Lily’s future, which is hinted at in the opening, but it’s not explored in any real depth. Kaitlyn Dever does as much as she can to try to make Lily likable, but unfortunately, the film as a whole suffers when it doesn’t have either Clooney or Roberts on screen.

It may not be the most outstanding technical achievement in terms of world-building, but “Ticket to Paradise” certainly feels like an advertisement for a holiday to Bali. Not only are the numerous locations used gorgeous, but the use of cinematography helps to capture a particular sort of magic due to the color grading. The images pop with vivid colors, and numerous sequences make the most of the surroundings to enhance not only the look of the country but the culture. The film explores the wedding culture within the area, discussing how sacred the ring exchange is and including numerous unique traditions of being officially married. Bali becomes more than just a holiday destination – it becomes a vital part of the narrative and a place somebody could call home. This idea of tradition in this film adds an element of intrigue and personality to Bali, letting the audience see into another way of life and become enraptured by it in the same way that they fall in love with the natural beauty of the location.

The dialogue in “Ticket to Paradise” is very hit or miss, with some scenes landing well and others not working tonally. In particular, one sequence involves an excruciating dental procedure that does nothing to drive the plot forward and isn’t used as a running gag but is designed to play for humor and falls flat. There’s some excellent material for Lily’s friend Wren, played brilliantly by Billie Lourd, but she starts to lose screen time in the film’s second half, and the lack of her presence is noticeable. The humor packed in the first hour slowly becomes less of a priority when the narrative tries to wrap up loose ends, and the movie loses some of its charms by the end of the runtime because of that decision.

Is “Ticket to Paradise” the greatest technical achievement of the year? Not close, but it also doesn’t need to be. Sometimes, all we need for a film is to entertain us for a few hours and provide some laughs. In this current era within the film industry, when we are questioning if there are any true stars in Hollywood anymore, I would like to make the case that George Clooney and Julia Roberts are names that still can bring people to have a good time at the theaters. That’s certainly what they have done in the past and what they continue to do here.

<b>THE GOOD - </b>Julia Roberts and George Clooney have great chemistry together, making it easy to buy into their relationship, and it produces some great comedic moments. The location choice of Bali works incredibly, with vivid colors and beautiful scenery selling the luxurious setting. An easy-to-watch flick that will tick off the boxes of its target audience.<br><br> <b>THE BAD - </b>The dialogue is cheesy, and sometimes it's hard to buy into the unrealistic plot line. The relationship between Lily (Kaitlyn Dever) and Gede (Maxime Bouttier) is much less compelling than that of Roberts and Clooney, and the film suffers without the two leads on screen.<br><br> <b>THE OSCAR PROSPECTS - </b>None<br><br> <b>THE FINAL SCORE - </b>6/10<br><br>"TICKET TO PARADISE"