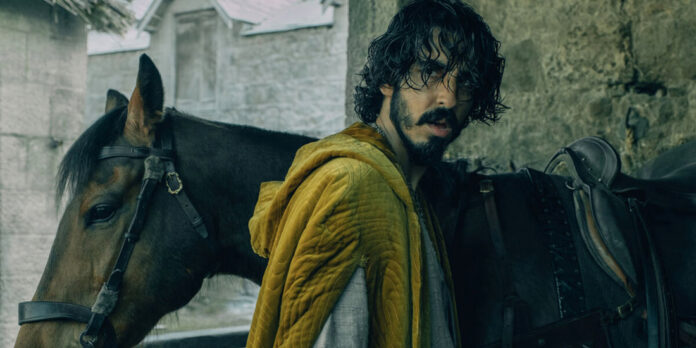 THE STORY – King Arthur’s headstrong nephew embarks on a daring quest to confront the Green Knight, a mysterious giant who appears at Camelot. Risking his head, he sets off on an epic adventure to prove himself before his family and court.

Director David Lowery’s much-anticipated adaptation of the 14th-century 2,500-word poem “Sir Gawain and the Green Knight,” re-titled here as “The Green Knight,” is finally amongst us. After numerous delays caused by the COVID-19 pandemic, the film will finally have eager eyes laid upon its dark and beautiful imagery and sharp minds pondering and debating its themes and symbolism. This reflective and deliberately paced historical fantasy makes it known early on that this is not the story of King Arthur nor his son’s story. This is David Lowery’s vision, and the result is the antithesis of medieval blockbuster entertainment you’d find in something like “Game Of Thrones.” An allegory for our time on one man’s quest for honor and what that ultimately means, it’s unlike anything else you’re likely to experience this year. Come along and take the journey out.

Based on the timeless Arthurian legend, “The Green Knight” tells the tale of Sir Gawain (a layered Dev Patel) and his legendary quest. He is a young man of King Arthur’s (a sweetly vulnerable Sean Harris) court who enjoys drinking, eating, and spending time with his paramour Esel (one of two roles played by Alicia Vikander) in Camelot. On Christmas day, his uncle, the king, asks him to sit alongside him and Queen Guinevere (Kate Dickie). Gawain has never known true greatness, mainly because his mother (Sarita Choudhury) has been cast aside by the court and is now regarded by many as a witch. But as fate (or something darker) would have it, a Green Knight (played with imposing menace by Ralph Ineson ) approaches the court that day and issues a challenge, a game if you will, to anyone brave enough to face it: strike him down, and if they do, they must seek him out one year from then and allow him to return the blow. Gawain answers the challenge, cuts off The Green Knight’s head, and believes the game to be over. However, at the behest of King Arthur and looking for his own path towards prominence, Gawain sets out with the Green Knight’s own large ax on an epic journey to seek him out at his residence, The Green Chapel, and finish the game that began a year prior. The road is long, filled with deceitful scavengers (Barry Keoghan), CGI talking foxes, naked giants, sensually seductive lords, and ladies (Played by Joel Edgerton and Alicia Vikander, respectively), headless ghosts (an eery Erin Kellyman), and more. Is Gawain off to face his death, or will he find the heroism within himself to give him the glory he so desperately seeks?

Is it only just a game or something more for Gawain? Maybe it’s all a dream, or perhaps a nightmare? The reality that David Lowery injects into his most ambitious film to date is more terrifying than either, resulting in a profoundly philosophical film filled with allegories and imagery so captivating that you might just lose your own head taking it all in. His collaboration with cinematographer Andrew Droz Palermo provides us with darkly lit images with high contrast to reinforce the shadows and the colors. It’s a visual feast, backed by Daniel Hart’s insistently breathtaking score (featuring a female choir of angelic voices) and some alluring sound design. The work that went into every movement of The Green Knight’s body helps give him such an ominous quality that it cuts right through the film’s score and infuses fear into our hearts.

It’s been said that due to the pandemic, Lowery went back into the editing room to play around with the film’s pacing, and this shows in not just how steadily the film is paced (which isn’t necessarily a bad thing), but it also shows on the screen in distracting ways. Numerous awkward crossfade edits feel unnecessary, and many shots linger for too long on some obscure object or image that surely, Lowery wants us to find some sort of deeper meaning in. Still, such a tactic is used far too frequently that it continuously distracts from the journey Gawain is traveling on. Lowery is drawing upon stories of the Celtic past and the French chivalric tradition of the Middle Ages to tell a Christ parable dealing in Christianity vs. Paganism. He’s also commenting on the beauty of our natural world and how we will all fall victim to it one way or another at some point. It’s challenging storytelling that will undoubtedly draw the ire of many viewers expecting a sword-swinging action/adventure film in the vein of many Hollywood blockbusters that have tackled similar material before. However, my suggestion? Stick with it until the end. While the road to get there is rough, Lowery delivers a jaw-dropping finale that features no dialogue and only sound and visuals to hammer home the themes and message of his story. It’s one of the best sequences of the year and worth any misgivings one might have had earlier on.

“The Green Knight” may not be what you’re expecting, and as a result, it might not be for everyone. Its intentionally paced tale of courage is one that directly challenges man’s very own notions of such themes in a way that will have audiences thinking about the film long after the credits roll. Are we brave enough to stare certain death right in the face and welcome it? Lowery’s film delivers complicated answers to such questions, but his tale is all the better for it. Despite some clear tinkering done in the editing room to boldly capture his vision on the screen, this is a film that will stay with you, it will fascinate you, it will transport you, and it will haunt you. Always searching for truth in his work, even if it means alienating his audience, and never repeating himself, I have no choice but to bow down and pay my respects to David Lowery.