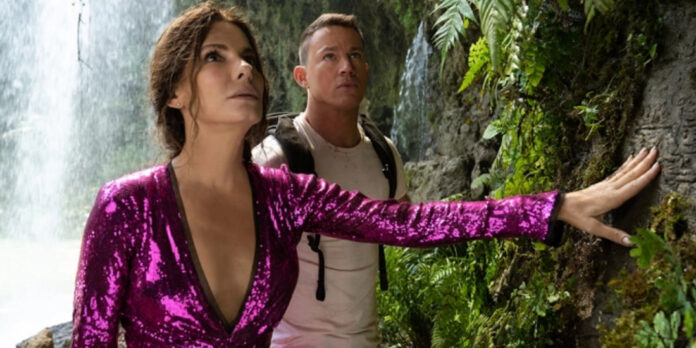 THE STORY – Reclusive author Loretta Sage writes about exotic places in her popular adventure novels that feature a handsome cover model named Alan. While on tour promoting her new book with Alan, Loretta gets kidnapped by an eccentric billionaire who hopes she can lead him to an ancient city’s lost treasure from her latest story. Determined to prove he can be a hero in real life and not just on the pages of her books, Alan sets off to rescue her.
​
THE CAST – Sandra Bullock, Channing Tatum, Daniel Radcliffe, Da’Vine Joy Randolph & Brad Pitt

​Movies are back, everyone! Not just in a general sense, but a very specific sense: Big-budget, superstar-led studio movies are back to entice you from your homes and into cinemas. For proof, look no further than this coming weekend’s big release, Paramount’s “The Lost City.” This film has gorgeous exotic locations, plenty of fun banter, a grand old-school adventure score, and four megastars (Sandra Bullock, Brad Pitt, Daniel Radcliffe, and Channing Tatum) for the price of one. Of course, these films returning means that their shortcomings are also back, but “The Lost City” does such a good job with the comfort-food basics of popcorn entertainment that its built-in shortcomings don’t matter so much.

Loretta Sage (Bullock) is a best-selling romance novelist whose series of “Lovemore & Dash” novels uses the real history she uncovered with her archeologist husband as a backdrop for steamy sex. But ever since her husband died, Loretta has been in a rut. She barely finishes her latest novel, “The Lost City of D,” in time for the book tour her publisher Beth (the delightful Da’vine Joy Randolph) has spent all of her time and energy organizing. Given her reclusive nature, she’s forced to do interviews with her cover model Alan (Tatum), who she hates. She barely gets through one interview before being kidnapped by the eccentric billionaire Fairfax (Radcliffe), who believes she can help him find the treasure of the actual “Lost City” on an island in the middle of the Atlantic Ocean. Desperate to prove that he’s more than just a buff bod and strong jawline, Alan goes to rescue her, enlisting the help of a former Marine he met at a wellness retreat (Pitt).

The set-up brings to mind any number of past Hollywood romantic comedy adventure films, most notably Robert Zemeckis’s “Romancing the Stone.” Directors Aaron and Adam Nee (“Band of Robbers”) don’t have to work too hard to emulate the breezy fun of those films. “The Lost City” is exceedingly light on its feet, and Bullock naturally adds a certain amount of tartness that cuts through the sweetness of every film she’s in. She and Tatum have classic screwball comedy odd-couple chemistry that elevates the zippy script. (And while we’re at it, let’s give Bullock a hand for consistently bucking the Hollywood trend and having rom-com love interests younger than her.) Unfortunately, as with most films of this ilk, the comedy gets a bit lost in the third act, when the adventure plot comes to a head and takes over the film’s tone. When the adventure plot is as uninspired as it is here, that would usually be a problem. Credit is due to screenwriters the Nees, Dana Fox, and Oren Uziel, for concluding the adventure plot with a neat little twist that serves to further the film’s theme and character development. The performers deserve credit, too, for adding just enough personality to make that development feel more genuine (and less rote) than it does on the page.

It’s easy to take the slick, surface-level, time-tested pleasures of “The Lost City” for granted, but it’s not easy to make grand throwback adventure flicks work this well. Last year’s “Jungle Cruise” nearly collapsed under the weight of its overly ornate CGI and stilted banter for stars Emily Blunt and Dwayne Johnson. And just last month, “Uncharted” showed all the seams of its years-long development hell. While the Nees may not quite reach the heights of the classics they’re trying to emulate, they know exactly what made them work, and they apply that knowledge with the enthusiasm of a couple of film students with an impossibly large budget. They know when to rely on their stars’ charisma. Pitt is an absolute blast in his glorified cameo, and a late-film dance between Bullock and Tatum is on fire from all the sparks they’re igniting. They know when to speed up and slow down the pace and how never to take themselves too seriously. If some of the action sequences are clumsily edited, at least they hit enough comic beats to keep us engaged. If the film is almost entirely devoid of stakes, at least the performers have enough personality and talent to keep us engaged, too.

It’s easy to want more from “The Lost City,” but making a film this entertaining isn’t easy. The fact that the Nees and their cast and crew have managed to make such a well-honed piece of popcorn cinema shouldn’t be taken lightly.