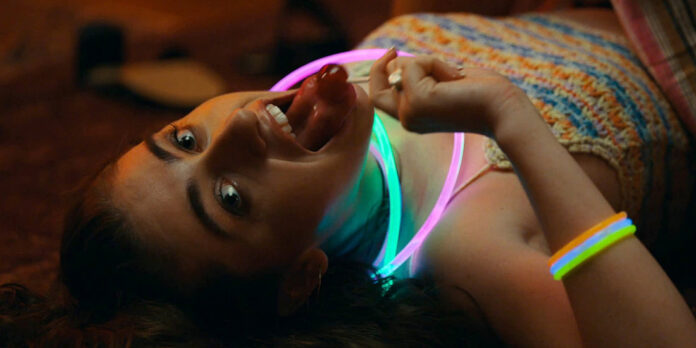 THE STORY – A party game leads to murder when young and wealthy friends gather at a remote family mansion.

​It seems near impossible these days for filmmakers to accurately depict Gen Z in modern entertainment. There’s always a drive to nail the supposed “narcissism” of the generation and perfectly capture their “Extremely Online” personas (with their leftist posturing and “woke” platitudes intact). Still, it often seems that creatives approach Gen Z-ers with such contempt that their characterizations come across more as caricatures than credible representations. If you don’t dig deeper – and actually try to understand the people you’re parodying – your commentary just becomes cliché and corny. However, what director Halina Reijn and writer Sarah DeLappe accomplish with the brutal and brilliant “Bodies Bodies Bodies” feels like a revolutionary moment for Gen Z representation in 2020s film – rather than tell us up front what to think or feel about their problematic protagonists, they form fully fleshed-out characters for us to first consider for ourselves, introducing them not with their faults or flaws but with their idiosyncratic identities, and letting the characters share their own shortcomings through their actions over time. It’s this more profound attention to detail that makes “Bodies Bodies Bodies” – already a spine-chilling horror story – linger much longer and leave a more considerable lasting impression, as these Gen Z-ers aren’t just stock stereotypes, but people we know – or may even be.

It all starts one night at a house party at a remote family mansion during a hurricane – a comically absurd set-up for a horror film, but knowingly so – hosted by the dopey David (Pete Davidson), the wealthy best friend of the equally rich Sophie (Amandla Stenberg), a former drug addict who is recently sober and has brought her working-class girlfriend, Bee (Maria Bakalova), along with her. After being in rehab for an extended period and “falling off the face of the Earth,” according to her friends, the social dynamics between Sophie and the others are a bit stilted. Still, David and his girlfriend Emma (Chase Sui Wonders) are the most accommodating. At the same time, Alice (Rachel Sennott) and her much-older new boyfriend Greg (Lee Pace) are cautiously cordial, even though the jealous and jaded Jordan (Myha’la Herrold) warns Bee that Sophie is not who she seems. However, things don’t fully take a twisted turn until later that evening, when the group decides to play party games. Sophie suggests “Bodies Bodies Bodies,” a “murder-in-the-dark”-style game that inevitably goes poorly, with everyone denying that they’re the killer until bodies actually start dropping. Shit gets real, causing friend to turn on friend and old secrets to come to light.

Perhaps the best part about “Bodies Bodies Bodies” is that, before the horror even begins, it’s simply an intensely intriguing character drama (as we piece together the particulars of the problems present in this fractured friend group) with clever bits of comedy interspersed throughout, pulling us into the protagonists’ lives and making them compelling individuals prior to (supposedly) being served up as slasher bait. It seems like no one is on good terms – with everyone having a good reason to knock someone else off – and screenwriter Sarah DeLappe does an exceptional job at enveloping us in this dark world of deception and dishonesty ahead of the central “whodunit’s” commencement, so that we’re just creeped out and confounded as our leading ladies, anxiously attempting to put the clues together alongside them and discover which girl is the worst of them all. DeLappe is also supremely savvy at capturing how real girls – and especially Gen Z girls – speak to one another, with none of the cliché or conventional comments you’d find in another youth-targeted genre film but instead some bona fide bitchy bickering and catty fibbing that feels rooted in reality instead of spit out of some algorithm.

DeLappe benefits even more from being blessed with an ensemble as excellent as this, who all deliver her lines with the intended vitriol and venom – particularly when it comes to a core conflict between Stenberg’s Sophie and Herrold’s Jordan – while Rachel Sennott and Lee Pace perhaps stand out as the strongest of all, as a buoyant bimbo and harebrained himbo respectively, who somehow manages to make these common stock characters feel fresh and funny again by committing wholeheartedly to these preposterous personalities and even subverting well-worn tropes when applicable. In fact, subversion is a strength of “Bodies Bodies Bodies'” overall, with DeLappe’s script continually avoiding the “obvious” conclusions, leading us towards another twist, and every actor doing their damndest to convince us of their innocence and deflect blame to another sketchy suspect caught in this chilling scenario. If one has any qualms with the cast, it’s that the marvelous Maria Bakalova – a comedic revelation in “Borat Subsequent Moviefilm” – doesn’t get to join in on the farcical fun with her castmates, but even then, she still delivers dutifully on the dramatic beats required of her.

Halina Reijn’s direction further elevates the proceedings with a punchy panache, as she finds the perfect balance between humor and horror, never letting one tone overshadow the other while always stressing the seriousness of the situation at hand at the same time (where she finds herself aided by Jasper Wolf’s crisp and coarse cinematography, which emphasizes the film’s eerie aesthetic while finding ways to make it “fun” visually as well, especially with a lot of the lighting coming from the girls’ party glow necklaces). Every death – and subsequent grisly discovery by the others – feels real and raw in a way that repeatedly returns the film to its slasher roots, and even when the relationship drama takes center stage towards the end of the second act, Reijn and DeLappe bring things back to horror basics for a fierce and frightening finale, with one final cruelly humorous reveal to top things off. Honestly, there’s something for everyone in “Bodies Bodies Bodies,” whether you be a fan of horror, comedy, or any of the stars involved (with everyone getting their moment to shine). Though it may not be as shocking or scary as the genre masterworks A24 has released like “The Witch” or “Hereditary,” it’s not trying to be. This is a razor-sharp social satire that seeks to take Gen Z and its most pernicious personalities to task first and foremost, and on that front, it succeeds wildly.