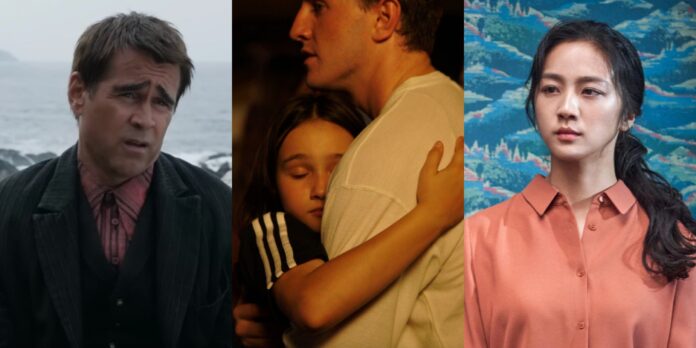 As we started last week with this new column called The Awards Audit, we are continuing our deep dive into the financial performance of this year’s Oscar hopefuls and will analyze how their results impact their prospects for this awards season. On this week’s Awards Audit, one of the year’s buzziest titles debuted with promising results while a slew of robust holdovers continued to expand successfully.

In its gentle push toward national markets, distributor Neon’s “Triangle Of Sadness” impressively found itself amidst the Top 10 despite a limited theater count. The Cannes Palme d’Or winner earned a sturdy $2,143 per-theater average, showing some vitality in the film’s financial future.

I credit Neon for pushing some of their chips in the middle this weekend instead of waiting for its full nationwide expansion on October 28th. Next weekend is looking surprisingly formidable for specialty releases (“Till” and “TÁR” are also expanding nationwide), so getting ahead of the curb on its expansion provides Neon with some mainstream momentum to build upon.

Unfortunately for Neon, “Triangle Of Sadness” will likely struggle to grow in the long run. The ongoing expansion of films with significantly better award prospects will likely limit the film’s audience. The Ruben Östlund-directed film is still flirting with some major awards, such as Best Picture (ranked 10th by the NBP team), Best Director (Ruben Östlund is ranked 8th), and Best Original Screenplay (Östlund’s script is ranked 5th). However, with critical support waning compared to its explosive festival run (the film is hovering around 73% on Rotten Tomatoes), I expect Best Original Screenplay to be the film’s best prospect for gaining traction throughout the season. I don’t think “Triangle Of Sadness” will manifest the type of glowing word of mouth to prevent it from being usurped by other Best Picture contenders down the line.

Still, a final domestic tally in the $3-$7 million range seems likely, and would ultimately be a respectable result considering the busy specialty marketplace.

Not all nationwide expansions are built equally. While “Till” is set for an extensive rollout, I expect “TÁR” to undergo a more methodical buildup (my theater count guess would be in the 600-700 range). The slow-burn approach perfectly fits Fields’ auteur-driven project, positioning the film to gradually translate its niche appeal into mainstream success over the next few months.

Blanchett is practically guaranteed to receive a Best Actress Oscar nomination and might be the favorite to win as of now (she currently has the top spot on NBP’s Best Actress predictions). Still, these next few weeks could be significant in defining the film’s Best Picture (currently ranked 9th on NBP’s predictions) and Best Director (Fields is ranked 4th) Oscar prospects. I think “TÁR” will ultimately land nominations in both categories, but winning either would require a true box office breakout over the next few weekends. I expect it to earn around $1.5-$3.5 million in its next weekend expansion.

Distributor United Artists Releasing continues to find success with their expansion of “Till.” While the film’s $3,000 per theater average pales compared to other specialty titles’ second weekends (“TÁR” and “Triangle Of Sadness” both hit $300,000 last week in around 30 theaters), “Till” is well set up for the long haul – both in terms of box office and awards consideration.

United Artists Releasing possesses a solid plan for the film’s nationwide push on October 28th, already marketing the film extensively during sporting events and other national TV programming. Theater counts are not out for next weekend yet, but I would guess “Till” will expand in the 1,000 theaters-plus range rather than a more limited nationwide expansion (600 theaters is considered the threshold). A greater emphasis on national awareness over specialty success is a sound strategy for spotlighting the film’s most prominent awards contender – Danielle Deadwyler, who is currently ranked 2nd on the NBP Best Actress predictions.

The only other wide release for next weekend is Lionsgate’s seldomly-marketed “Prey For The Devil,” which sets “Till” up nicely to take advantage of a lull in the marketplace. I think $2-$6 million is an acceptable bar to predict for the film’s nationwide expansion next weekend, although I wouldn’t be surprised if it performs on the higher end of that range. Don’t be shocked if “Till” picks up enough momentum to sneak in the Best Picture field and ultimately win Deadwyler the Best Actress Oscar.

The latest from acclaimed “Oldboy” and “The Handmaiden” auteur Park Chan-wook, “Decision To Leave,” is shaping to be one of the seasons’ sleeper success stories. The film from global distributor MUBI amassed an impressive $6,176 per theater average as it built upon its $96,200 debut last weekend. Like “Till,” I would not be surprised if “Decision To Leave” eventually contends in major categories like Best Picture and Best Director (Park Chan-wook is currently ranked 10th on NBP’s predictions) if its expansions showcase positive results. The film is already one of the top contenders for Best International Film (ranked 2nd) and Best Original Screenplay (ranked 7th).

MUBI will be in it for the long haul with “Decision To Leave” likely opting for a more patient rollout that won’t reach nationwide markets. Still, it’s encouraging that the distributor is committing to expanding the project to 200+ plus theaters. That would be one of their widest releases to date, a telltale sign of their significant confidence in this project.

Searchlight Pictures’ marquee award favorite, “The Banshees Of Inisherin,” enjoyed an impressive debut in its four-theater run in New York and Los Angeles thanks to a strong film festival start after winning Best Actor and Best Screenplay at Venice and near-universal acclaim from critics (plus, who can resist an “In Bruges” reunion between the filmmaker and his stars?). A $45,000 per theater average is the best result yet for a Fall awards favorite (“TÁR” was the previous high at $39,655) and only slightly trails the remarkable debut of A24’s “Everything Everywhere All At Once” earlier this year (a $50,130 per-theater average in its ten theater debut).

The latest project from “Three Billboards Outside Ebbing, Missouri” writer/director Martin McDonagh is destined to be a top awards contender. Nominations for Best Picture (currently ranked 4th by NBP), Best Director (ranked 6th), Best Actor (Colin Farrell is ranked 2nd), Best Supporting Actor (Breandan Gleeson is currently in first place while Barry Keoghan is at 8th), Best Supporting Actress (Kerry Condon is ranked 3rd), and Best Original Screenplay (currently ranked 3rd) are looking attainable for “The Banshees Of Inisherin.” I expect Searchlight to be aggressive with their campaigning here due to the high win potential the film possesses at this year’s Academy Awards in multiple categories. The premise’s drama and dark comedy mixture should also be more mainstream-friendly than some of the film’s more niche competitors.

“The Banshees Of Inisherin” will expand to 80 theaters next weekend before a roughly 800-theater rollout on November 4th.

One of the year’s most-beloved critical darlings, A24’s “Aftersun,” earned a decent $16,589 per theater average in its debut this weekend. The results here are honestly commendable, considering the wealth of specialty options right now. Still, the opening fittingly reflects the movie being a more niche offering that has benefited from a slow festival rollout starting at Cannes earlier this year and making its way through Telluride, TIFF, and NYFF. As a result, I expect the independent darling to become more of a hit with critical circles than Academy voters.

Next weekend will bring significant expansions for most of these films, along with Focus Features’ James Gray-directed film, “Armageddon Time.” See the full release slate below for October 28th.

THEATERS WIDE
Prey For The Devil

THEATERS EXPANDING
The Banshees Of Inisherin
TÁR
Till

Do you like this new format? We appreciate your feedback on our previous box office columns, which is why we’re delivering this new analysis to keep track of how this season’s awards contenders are doing at the box office. Is there anything you would like to see in future posts? But also, please tell us what you saw this weekend and what did you think? What will you be seeing next weekend? Please let us know in the comments section below or on our Twitter account.