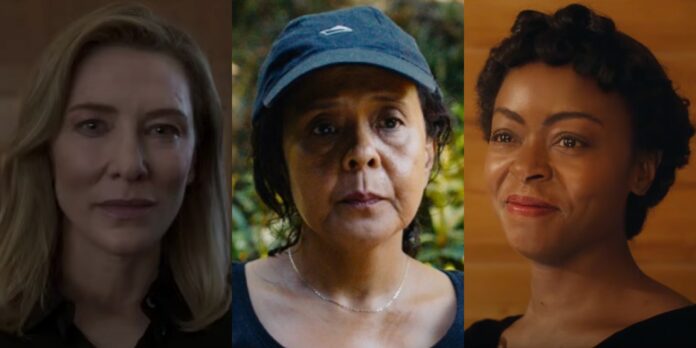 With this new column titled The Arthouse Audit, I will take a deep dive into the financial performance of this year’s Oscar hopefuls and analyze how their results impact their prospects. This weekend showcased promising results from a few festival staples performing well in the specialty marketplace.

Distributor Neon’s sharp satire on socialite superficiality “Triangle Of Sadness” continues to find an audience after its crowd-pleasing festival runs at Cannes, TIFF, and NYFF. The results are already a noticeable improvement from auteur Ruben Östlund’s last feature, “The Square” ($228,446 in its first two weeks), but still remains a far cry from Neon’s last awards darling “Parasite” ($1.79 million in its first two weeks).

In the past, Neon often spotlighted their perspective award features in semi-nationwide release platforms. “Spencer” (996 theaters) and “Pig” (552 theaters) debuted last year with decent initial results. However, the release strategy led to both titles dissipating quickly from the marketplace rather than developing a palpable sense of interest. The studio has been wise to be patient with “Triangle Of Sadness,” which could boast enough word-of-mouth buzz to connect with wider audiences once its nationwide push begins on October 28th.

“Triangle Of Sadness” may become a minor success story for Neon, but it will likely struggle to break out amidst its buzzier peers. I can’t imagine the film earning more than $5-$9 million during its domestic run, which wouldn’t be a bad result for the niche international title. The film remains a long shot for Best Picture (ranked 10th by the NBP lineup), Best Director (Östlund is ranked 9th), and Best Supporting Actress for Dolly De Leon (she hasn’t cracked the top ten yet). I expect the Best Original Screenplay to be the film’s best bet for a nomination as it currently sits at no. 5 on NBP’s charts.

The long-awaited return from writer/director Todd Field, “TÁR” remains a captivating title on the specialty market – scoring a sturdy $9,166 per-theater average in its small expansion to other marquee marketplaces. The glowing festival runs at the Venice Film Festival, and Telluride continues to coincide with strong reactions from critics (hovering around 94% on Rotten Tomatoes). Word of mouth will be crucial for Field’s transfixing descent into the life of an acclaimed composer, as the 148-minute feature does not boast the most innate commercial appeal.

Still, box office and awards are not an exact correlation. I expect the title to retain niche audiences in a marathon, not a sprint approach from distributor Focus Features. As long as distributor Focus adopts patience with the meditative drama, “TÁR” should parlay its immaculate craft into serious consideration for Best Picture, Best Director, and Best Original Screenplay. It’s certainly no secret that star Cate Blanchett is one of the early favorites for the Best Actress Oscar title as NBP currently has her ranked no. 1. “TÁR” will expand further this weekend before its nationwide rollout on October 28th acts as a good litmus test.

One of the season’s other Best Actress contenders, Danielle Deadwyler, saw her campaign build momentum with the strong debut of “Till.” The affecting true story garnered an impressive $15,141 per theater average – a promising result considering the film’s larger platform debut. Distributor United Artists Releasing is already making its voice heard with a proactive marketing campaign following the film’s premiere at NYFF. The early TV spots and advertisements should help develop buzz for the title, which is already eliciting positive responses from critics (it still holds a 100% score on Rotten Tomatoes based on 62 reviews).

Out of the three titles making their nationwide push on October 28th, I believe “Till” likely possesses the best financial prospects. It will be fascinating to see if the film can build on its success for consideration in other categories such as Best Picture, Best Screenplay (we still don’t know if it will be considered Original or Adapted), Best Costume Design, Best Original Score, and Best Original Song.

Next weekend, I’ll dive into the platform debut for Martin McDonagh’s “The Banshees Of Inisherin” and analyze updates on other award holdovers, such as director Park Chan-wook’s latest “Decision To Leave.”

Do you like this new format? We appreciate your feedback on our previous box office columns, which is why we’re delivering this new analysis to keep track of how this season’s awards contenders are doing at the box office. Is there anything you would like to see in future posts? But also, please tell us what you saw this weekend and what did you think? What will you be seeing next weekend? Please let us know in the comments section below or on our Twitter account.

Share
Facebook
Twitter
Copy URL
Previous article
The Next Best Picture Podcast – Interview With “Till” Director/Writer, Chinonye Chukwu
Next article
“THE SCHOOL FOR GOOD AND EVIL”