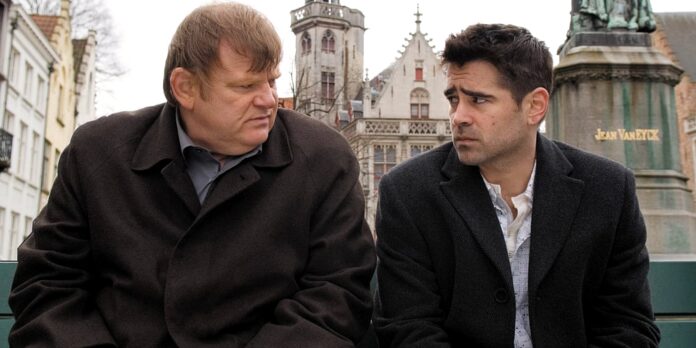 THE STORY – After a particularly difficult job, hit men Ray and Ken head to Belgium to hide out until things cool down. Ray hates the medieval city they land in, but Ken finds its beauty and peacefulness enchanting. Their experiences become increasingly surreal and possibly life-changing as they encounter tourists, locals, an American dwarf, and a potential romance for Ray.

There are certain movie tropes that scream cliche. Once they’re spotted, the viewer is made to feel like they’re getting a riff on a concept that used to be original but is now shorthand for something convenient and easy to market. Take, for example, the hitmen who bicker and make snide remarks in between murders. Or the crime boss who comically overreacts. Maybe the shocking death of the main character. Since “Pulp Fiction” changed the game in 1994 and led to a slew of imitators, these tropes have been perceived as tiresome. In most cases, they are, but “In Bruges” (2008) proves they don’t have to be. The darkly comedic feature directorial debut from Academy Award-winning writer/director Martin McDonagh managed to rearrange these neo-noir tropes into something dazzlingly fresh. It’s got dialogue that can cut glass, performances akin to tight-rope displays, and constantly shifting alliances that keep us guessing. Let’s not get too far ahead of ourselves, though—first, the premise.

“In Bruges” chronicles the boredom of two hitmen, Ray (Colin Farrell) and Ken (Brendan Gleeson), as they kill time in the titular Belgian city. They’ve been sent there because Ray, the rookie, killed someone by accident, and Ken, the veteran, is tasked with keeping him out of sight until things cool down. The problem, of course, is staying out of sight in a city where basically nothing happens, and keeping Ray content, despite the creeping guilt he feels.

A film with such a minimal structure requires stellar chemistry between actors, and “In Bruges” delivers in spades. Farrell and Gleeson have rarely been better, with their odd couple attributes bringing out nuances that hadn’t been seen in either of their careers up to this point. Farrell was at a tumultuous point in his life, having struggled with addictions offscreen and A-list expectations onscreen (courtesy of bombs like “Alexander” [2004] and “Miami Vice” [2006]). It seemed as though he was on the decline, but he was able to channel these insecurities and frustrations into a sublime performance. He’s a revelation as Ray, the screw-up who can’t seem to go anywhere without getting into deadly trouble and/or whining.

McDonagh is able to see past Farrell’s leading man looks and unlock his inner-character actor, which allows him to be petty and downright irritating at times. Take, for example, the scene where Ray gets into it with American tourists. Instead of touting a firearm or intimidating them with his hitman credentials, he runs around in circles like a petulant child. When Ken arrives on the scene to ask what happens, he shrugs with the simplicity of an even younger child. Ray would have been insufferable in someone else’s hands, and it’s a testament to Farrell that he’s always able to keep us on his side.

Gleeson is the other pivotal element in the “In Bruges” recipe. His gruff exterior made him the perfect heavy in dramatic epics like “Braveheart” (1995) and “Troy” (2004), but he’s able to shed that and embrace a warmer, softer persona here. He’s a riot as the wannabe straight man of the duo, trying to talk sense into his partner while at the same time being constantly frustrated by him. He’s also the film’s beating heart, pushing Ray towards a brighter path on nothing more than the hunch that he has goodness in him.

Both Gleeson and Farrell are Irish, which is worth noting because they’re perfectly suited to the expletive-filled poetry of their fellow countryman, McDonagh. They nail every inflection, every insult, and every subtle admission of brotherhood on the page, and they do it at such a breakneck pace that you’re liable to miss a lot of it on the first viewing. “In Bruges” is a film that actually gets better with subtitles because there’s so much packed into the 107-minute runtime that the laughter often drowns out the next (and often even funnier) line of dialogue.

As previously mentioned, fast-talking criminals and dark comedy are nothing new in the neo-noir arena. People like Quentin Tarantino, Joel & Ethan Coen, and Guy Ritchie had been doing it decades before McDonagh arrived on the scene. Still, McDonagh’s ability to meld these tropes with grim subject matter like child murder or suicide is what sets him apart from his cinematic brethren. “In Bruges” has legitimately harrowing moments between its main characters, and the sincerity these moments are afforded is part of why the film has held up so well. That and the third act introduction of the duo’s boss, who Ralph Fiennes plays with so much manic gusto that he almost knocks the other two off the screen. Never have we seen a telephone take so much abuse.

Is “In Bruges” perfect? Not quite. The film circles back on certain gags a little too frequently, and, like with so many releases that are 15 + years old, some of the jokes have aged poorly. The whole subplot involving the dwarf is clever if you get the “Don’t Look Now” (1973) reference, but it doesn’t have the same zing it did in 2008 otherwise. McDonagh’s absurdist tendencies would really take center stage in his second film, “Seven Psychopaths” (2012), which is partially why it falls short of “In Bruges” on the whole. He may have received further success and awards recognition with “Three Billboards Outside Ebbing, Missouri” but “In Bruges” has stood tall all these years as his best overall film mostly because he’s never displayed better control over characters, tone and themes. The impending release of “The Banshees of Inisherin,” which reunites McDonagh, Farrell, and Gleeson, puts “In Bruges” in a different context. It will hereafter be seen as part of a collection of films between the trio, especially with talk of a third collaboration already brewing. That said, the quality of “In Bruges” has not faltered, and the film remains a hilarious, heartfelt career high point for everyone involved. Please make a point of rewatching it before you see McDonagh’s latest. You likely won’t be disappointed.