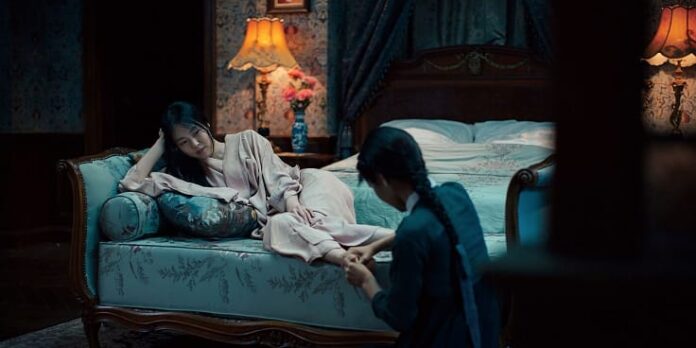 THE STORY – With help from an orphaned pickpocket (Kim Tae-ri), a Korean con man (Ha Jung-woo) devises an elaborate plot to seduce and bilk a Japanese woman (Kim Min-hee) out of her inheritance.

Park Chan-wook’s “The Handmaiden” is a bizarre, deceptive and seductive tale of revenge, love, lust greed and it’s a tremendous amount of fun. The story (Loosely based on the novel Fingersmith by Sarah Waters) is as twisted as they come and Chan-wook brings an intricate eye for gorgeous visuals and taste for dark comedy to the proceedings leading to one of the most unexpected melodramas of the year. Giving away the entire plot of “The Handmaiden” ruins most of the fun that it brings to the table, so I’m going to do my best to summarize this oddly dark story as best as I can.

Set during the 1930’s in Japanese-occupied Korea, a conman named Count Fujiwara (Ha Jung-woo) hires a pickpocket named Sook-Hee (Kim Tae-ri) to become the new maid for a rich Japanese woman named Lady Hideko (Kim Min-hee). Count’s goal is to marry Hideko, gain her inheritance, then have her committed to an insane asylum. When Sook-Hee begins serving Hideko, she becomes aware of Hideko’s controlling uncle Kouzuki (Cho Jin-woong) and starts to have second thoughts on ensuring the marriage between Hideko and Count goes through successfully. Her affections for Hideko takes Sook-Hee down a twisted path filled with lies, deceit, and betrayal.

“The Handmaiden” is separated into three acts. Each act brings a new spin onto the described plot above. Not everything is as it appears in “The Handmaiden” and great pains are taken to show us every side of the story. As Uncle Kouzuki says towards the end of the film, “A story is all about the journey” and Park Chan-wook is interested in exploring every layer to this story employing multiple voiceovers, perspectives, and allegiances for the audience. Where Part 1 sets the story, Part 2 tears it all down and builds it back up again leading to a climatic Part 3. There are twists within twists within the story of “The Handmaiden” and Chan-wook weaves this sumptuous tale with skill and artistry. Every frame of “The Handmaiden” has been intricately well thought out on a technical level resulting in one of the most elaborate and gorgeous looking films of the year. From the production design to the costumes and cinematography, “The Handmaiden” is a true feast for the eyes.

The beauty of the film is matched by the beauty within the relationship between Sook-Hee and Lady Hideko. Even as the plot twists and turns its way through their relationship, there is no denying that Chan-wook garners such emotive and terrific performances from his two leading ladies. If there are any flaws to be found within “The Handmaiden” it’s that the film runs on for a bit too long and there are many scenes (Especially in Part 2) which could have been trimmed down to make this psychological drama/thriller more tight in its intensity. Also, the men in “The Handmaiden,” despite the best efforts by screenwriters Park Chan-wook and Chung Seo-kyung to give them as much character development as possible, never become as interesting as the female leads do. Every scene between Sook-Hee and Lady Hideko is seductively brilliant that whenever the men are given the spotlight, the film begins to lose a bit of steam.

“The Handmaiden” may rely too heavily on its many twists to keep the audience captivated through its story that it almost comes off as too gimmicky. However, there is such skill employed behind the camera by Park Chan-wook that it is hard to deny how much of a good viewing experience watching “The Handmaiden” can be. It’s a sexual, mysterious and absorbing story that had me riveted from its first frame to its last despite my desire to see at least twenty minutes shaved off of the runtime and a few other minor quibbles here and there. Go into “The Handmaiden” knowing as little as possible. You probably will not regret it.