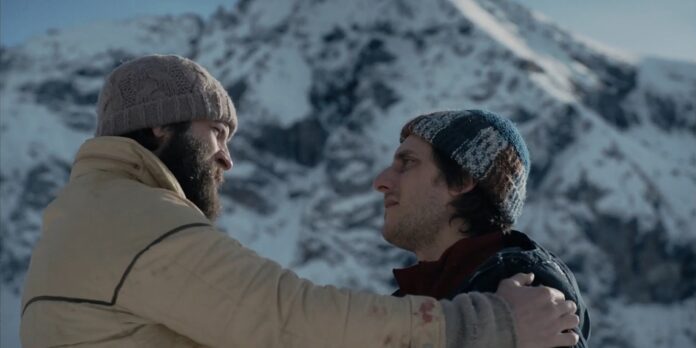 The Cannes Film Festival is, perhaps, the best place to get a sense of the potential contenders in the Best International Feature Film race at the Academy Awards. If we look back as recently as the 94th Academy Awards, nominee “The Worst Person in the World” and winner “Drive My Car” both premiered at Cannes. While the country of France put more weight on the Palme d’Or prize for Julia Ducournau’s “Titane” than the Venice Film Festival’s Golden Lion prize for Audrey Diwan’s “Happening,” selecting the former as their entry for last year’s race. Currently, some films have already been selected as representatives for the Best International Feature Film race that premiered at this year’s Cannes Film Festival. But I would personally like to advocate for one country’s selection in particular: for Italy to highly consider “The Eight Mountains” as their official selection in this year’s Best International Feature Film Oscar race.

Directed by Charlotte Vandermeersch and Felix Van Groeningen, “The Eight Mountains” is adapted from a novel of the same name by Paolo Cognetti, which won the Strega Prize, Italy’s most prestigious literary awards and Frances’ Prix Medicis Etranger. The three-hour film depicts a friendship between two men who spent their childhood together and reconnected as adults. It is a film that covers all aspects of life, young and old, closeness and distance, the cityscape, and the isolated mountain landscapes. Vandermeersch and Groeningen’s direction keeps the audience captivated despite the slow pace and long runtime, creating a calming and reflective tale that is relevant to the viewer, no matter what is currently going on in their life at that moment in time. I have already reviewed “The Eight Mountains” from Cannes, but nearly four months later, the film clearly had a lasting impact.

Vandermeersch and Groeningen are Belgian directors, so it would make sense on paper as to why some people may presume that Belgium should be the country to select the film as their representative for this year’s race. However, it has already been announced that Belgium picked Lukas Dhont’s “Close” as their selection. This makes a lot of sense, and it is a strong choice for the country, as “Close” had a strong word of mouth coming out of Cannes and won the Grand Prix alongside Claire Denis’ “The Stars at Noon,” the second-most prestigious prize at Cannes aside from the Palme d’Or. Not only that, but Dhont’s feature-length debut “Girl” was chosen as Belgium’s International Feature Film selection for the 91st Academy Awards, making him a new favorite for the country. Dhont was also selected over Jean-Pierre and Luc Dardenne, whose latest film “Tori and Lokita” also won an award at this year’s Cannes Film Festival.

However, a country does not necessarily have to pick a film directed by someone who resides in their country. While Hirokazu Kore-eda’s “Broker” was not selected by any country for this year’s Best International Feature Film race, it would have been more likely for South Korea to choose it rather than his home country of Japan. This is due to a majority of the financing, cast, and shooting that took place in Korea, and this is the same situation that applies to “The Eight Mountains.” Vandermeersch and Groeningen may both be Belgian, but this is essentially an Italian film. The cast and creative team are primarily Italian, the film was shot in numerous places around Italy, the language spoken is Italian, and the source material is from an Italian writer. Not only that, but a majority of funding for the film came from Italy, with companies such as Wildside and Vision Distribution helping to produce. “The Eight Mountains” prides itself on spectacular cinematography, but that is only possible due to the gorgeous Italian locations used, both in the mountains and cityscape. It is a beautiful reflection of the country, and it would have been a disservice to the film if it was chosen as Belgium’s selection for this year’s Best International Feature Film race instead of Italy’s.

Aside from director Paolo Sorrentino’s work, which saw a nomination last year for “The Hand of God” and a win in 2013 for “The Great Beauty,” Italy has failed to receive a place on the shortlist since Giuseppe Tornatore’s “The Unknown Woman” in 2005. If Italy wants to find itself shortlisted and, therefore, have a chance at a nomination, they may find themselves attracted to the Belgian directors. In 2013, Felix Van Groeningen’s film “The Broken Circle Breakdown” was selected by Belgium and earned itself a Best Foreign Language Film nomination, proving that he is already on the Academy’s radar. While there are other films that Italy could select that made film festival appearances, the case for them is less compelling than with “The Eight Mountains.” Susanna Nicchiarelli’s “Chiara” has had mixed reception coming out of the Venice Film Festival, and Emanuele Crialese’s “L’immensità” has had very little buzz and only accumulated seven Rotten Tomatoes reviews despite starring Penélope Cruz and officially releasing to the general public in Italy on September 15th. Other films in the running would include Gianni Amelio’s “Lord Of The Ants,” and Mario Martone’s “Nostalghia” but none of these currently have US distributors. Currently, “The Eight Mountains” is the only Italian film this year that has won a major prize at any major film festival. From Sundance and Berlin at the start of the year to Venice and TIFF during the fall season as the film won the Jury Prize at Cannes alongside Jerzy Skolimowski’s “EO.” Poland has already selected “EO” as their Best International Feature Film for this year’s race, and the jury prize should be a consideration for Italy’s selection when no other film from Italy has been able to make a splash during the fall film festivals.

Out of all of the films that Italy could select for this year’s Best International Feature Film race, “The Eight Mountains” is one of the few that have managed to secure distribution within North America. Sideshow and Janus Films acquired the U.S. rights to distribute “The Eight Mountains,” and they are in strong shape after last year’s Academy Awards. Sideshow and Janus Films previously had the rights to Ryusuke Hamaguchi’s “Drive My Car,” which not only won Best International Feature Film last year for Japan but also received nominations for Best Adapted Screenplay, Best Director, and Best Picture. More people now than ever are paying attention to the films that Janus Films acquires. Therefore, it should suggest a sign of confidence for “The Eight Mountains.” It also makes sense that Janus Films would lean towards a film like “The Eight Mountains,” given some of the similarities between that film and “Drive My Car.” While their stories are very different, both films approach their subject matter with a sense of quietness and respect, with both sets of filmmakers choosing long runtimes and slow pacing to tackle themes such as grief and connection. Critics fell in love with “Drive My Car” and pushed it into the Best Picture conversation last year, and I believe critics could also be a driving force to get “The Eight Mountains” into at least the Best International Feature Film race this year.

So far, this year’s Best International Feature Film race has been chaotic. With “Broker” no longer eligible for any selection this year and Alejandro González Iñárritu’s “Bardo” producing mixed reception from both Venice and Telluride, the race has become a lot more unpredictable than initially expected. South Korea’s official selection, Park Chan-wook’s “Decision to Leave,” has become a strong contender. Still, there has also been great word of mouth coming from Germany’s official selection, Edward Berger’s “All Quiet on the Western Front.” With this year’s front-runners shaping up to be packed with thrillers and darker subject matters, there is space for a film to crash the race that slows everything down and gives the voters time to be whisked away in the gorgeous mountain landscapes for a few hours. If Italy selects “The Eight Mountains” as their representative and if Sideshow and Janus Films are able to create similar buzz as they did last year for “Drive My Car,” I see no reason as to why it should not crack the shortlist for this year’s Best International Feature Film race at a minimum. The film would definitely receive a nomination for me, and it may just be my personal winner as of now. So, I will say this one last time: Italy, please consider choosing “The Eight Mountains” as your selection for the Best International Feature Film race this year.