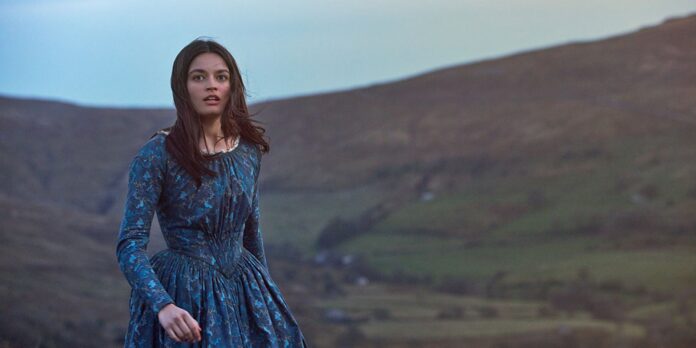 THE STORY – Imagines the transformative, exhilarating, and uplifting journey to womanhood of a rebel and a misfit, one of the world’s most famous, enigmatic, and provocative writers who died too soon at the age of 30.

Of the three Brontë sisters, Charlotte, Emily, and Anne, Emily (Emma Mackey) is known to everyone in town as “the strange one.” The other two are good girls: Eldest Charlotte (Alexandra Dowling) has just become a teacher, and Anne (Amelia Gething) is the sweet-as-pie youngest. Middle child Emily – wild, free-thinking, and prone to spells of depression that match her dark-as-night hair – is the black sheep of the girls, the one who can seemingly never do anything right. And yet, on Emily’s deathbed, perfect daughter Charlotte asks her a question that reeks of sibling rivalry, the question that readers have been asking for at least a century: “How did you do it? How did you write ‘Wuthering Heights?”

It is a testament to Frances O’Connor, an actress directing and writing her first feature, that her biopic “Emily” never comes right out and answers that question. Instead, she teases out what we know of Emily’s upbringing and the social mores of her period to show how the roiling emotions contained in her incredible novel can build up in someone enough that the only way to free themselves would be to write them down. “Emily,” though it does take liberties with Brontë’s life, is not a work of fantasy. It does not suggest that the characters she wrote had direct analogs in her life, but it does suggest that she wrote what she knew: the darkness and fog that engulfed the moors where she lived and consumed her inner being.

In O’Connor’s telling, the sisters’ lives are shaken up a bit by the arrival of a new, incredibly handsome local clergyman, William Weightman (Oliver Jackson-Cohen). All three are smitten, and their sibling rivalry for his attention causes friction. But it is Emily, the most solitary one and the one who challenges Weightman most, who wins his affections, leading to some surprisingly steamy sex scenes. This is the closest O’Connor gets to suggesting that “Wuthering Heights” had its roots in actual people or situations that Emily knew. Still, even then, it is a more abstract, “people will abuse your trust and toss you aside for the sake of their principles” kind of way than making Weightman an avatar for Heathcliff. As Charlotte states at one point, Emily’s novel is “base and ugly and full of people who only care for themselves,” to which Emily replies: “Good.” The people in Emily’s life do not only care for themselves but lash out at her for being base and ugly when she gives life to the darkest parts of her imagination. Society in the 1800s was not kind to women generally but far more unkind to women who defied the social norms set for them, who were not always respectful (like Charlotte) and demure (like Anne). Emily flew in the face of all that, wanting nothing more than the freedom to be herself and enjoy life on her own terms, whether running in the rain or having sex with a hot priest.

As Emily, Emma Mackey is utterly fantastic. She imbues Emily with a sense of warmth; towards her sisters and her brother Branwell (Fionn Whitehead), animals, and the natural world. Mackey shows how Emily attempts to smother her depressive moods with that warmth but is often unable to. When those depressive moods strike, she burrows deep into a debilitating, rock-bottom despair that is all the more tragic for how easily we in the present day can diagnose when her contemporaries could not. Throughout, Mackey is a ferocious screen presence, nearly impossible to look away from. It is easy to see why Weightman becomes attracted to her, and Jackson-Cohen’s slightly roguish energy meshes with hers beautifully. The two have phenomenal chemistry, and O’Connor runs with that to make the film feel sexier than your average period piece.

The confidence of O’Connor’s writing and directing is incredibly strong for a debut film. She takes many artistic chances in how she tells this story, and they pay off in some painstakingly gorgeous sequences. The most notable of these is a striking scene in which the Brontë siblings are playing a guessing game with Weightman involving a mask. When pushed to play, Emily takes on the persona of their dead mother and is so convincing that her siblings end up believing that she is actually possessed by her spirit. Nanu Segal’s cinematography also helps the audience believe it, casting everything in a ghostly golden glow that adds an air of mystery and mysticism that is wholly surprising for a period biopic. Elsewhere, Segal is attuned to the lushness of Emily’s world, giving weight to the fog on the moors and finding light in the rainstorms, which seem to be the one constant source of Emily’s joyous smiles. Abel Korzeniowski’s score incorporates primal yelps that further push us into the wildness of Emily’s mental state. The production and costume design are accurate to both the time period and class, further distancing Emily from those around her.

O’Connor’s wise, witty dialogue feels both of its time and just a bit current, helped by the delivery from the pitch-perfect ensemble. “Emily” is impressive on just about every level, a remarkably assured debut from an artist perfectly attuned to her subject. Here’s hoping O’Connor’s career lasts longer than Emily’s did.