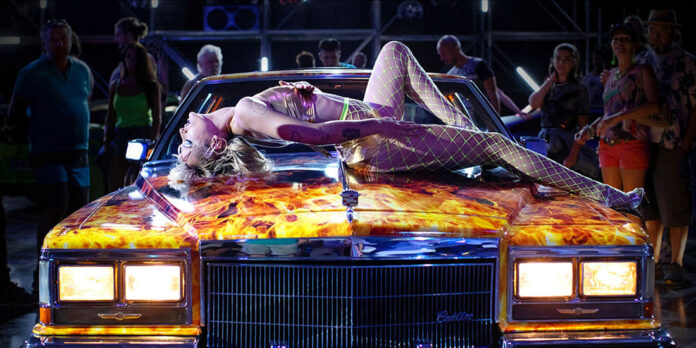 8/2/2021
​By Hunter Friesen
​
Containing some of the most disgusting and in-your-face grisliness that has ever graced the silver screen, Julia Ducournau’s “Titane” holds you like a vice grip from minute one, refusing to let you go no matter how much you squirm. The experience of watching the film can be borderline torture, as violent punishment is enacted in ways that can only be seen to be believed. The film’s screening at the Cannes Film Festival resulted in several walkouts within the first fifteen minutes. Those who are squeamish have officially been warned. However, those who can stomach the film will be rewarded with an exhilarating story about acceptance and companionship told by one of the most original emerging filmmakers working today.

Translated from the French word for titanium, “Titane” follows the life of Alexia, who immediately causes a severe car crash within her first few minutes on screen. This leaves the girl with a metal plate implanted within her head (which is gruesomely illustrated) and a twisted attraction to the vehicle involved in the accident. Like the characters in David Cronenberg’s “Crash,” Alexia can’t seem to help herself from being allured by vehicular and sexual violence. After physically recovering from her injuries over the years, Alexia (now played by the self-assured newcomer Agathe Rousselle) currently works as an exotic dancer at a car show (how very fitting).

Ducournau traverses the show filled with neon lighting and an electric score through a nearly seven-minute-long take. Cinematographer Ruben Impens, reteaming with Ducournau after “Raw,” shoots the film in harshly contrasting light, often blinding the viewer with lens flares, bold colors, and striking compositions. Alexia quickly succumbs to her violent tendencies from this car show, forcing her to go on the run, but not without horrifically mangling her face so it would be harder to identify her. This brings her in contact with the local fire chief (a steroid-infused Vincent Lindon, also playing a character named Vincent), who later turns out to be just as demented as she is, making them a match made in hell.

Still a relative newcomer to the film scene, French auteur Julia Ducournau has officially cemented her reputation as a force to be reckoned with in the film industry with only her second feature-length film. She made her debut feature in 2016 with “Raw,” a story about womanhood and repression that just so happened to contain the element of cannibalism. Like David Lynch and David Cronenberg, Ducournau confidently confounded her audiences with her bold take on a story as old as cinema itself. “Titane” is proof that “Raw” was not a stroke of beginner’s luck and that she is the real deal becoming the first female director to have her film outright (no tie or shared credit) win the Palme d’Or from the Cannes Film Festival.

Throughout several instances within “Titane,” audiences have to give themselves over to Ducournau’s vision and accept the logical fallacies, which nitpickers could have a field day with. To be fair, a literal Cadillac becomes sexually involved with a human in the first fifteen minutes, so the laws of reality (and anatomy) are thrown out the window from the get-go. At that point, you’re along for the ride, or you’re not. Like “Raw,” Ducournau is able to relay a positive message that sticks with you just as much as the gore and violence do. Through their interactions, Alexia and Vincent find a common emotional ground that brings them together through both lies and deceit. However, a problem that occasionally appears is what exactly Ducournau wants you to feel as too many elements come crashing together at odd times. The film wants you to simultaneously focus on several different conflicting emotions and storylines, some of which don’t amount to much and could be classified as red herrings. Still, once you cut through the clutter, there’s enough richness to reward your patience.

“Titane” requires a lot from the viewer, such as a mental fortitude and an iron gut. It’s an uncompromising vision that bites off more than it can chew from time to time but still sticks the landing due to the outstanding, committed performances from Rousselle and Lindon. With her latest film, Ducournau has displayed a boldness to go where no other modern-working director would dare venture. Just make sure to watch it on an empty stomach and with an open mind.