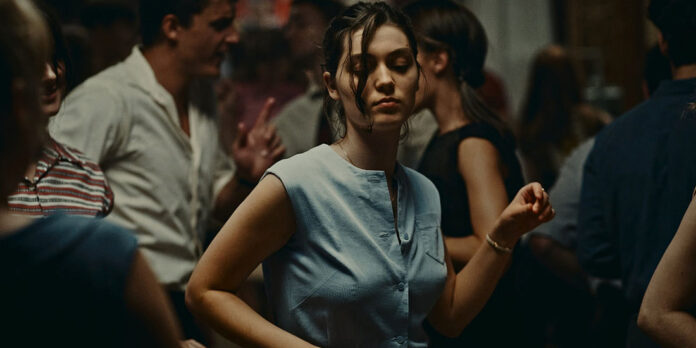 THE STORY – In 1963 France, Anne, a promising young university student, is devastated to learn she’s pregnant. She immediately insists on termination, but her physician warns of the unsparing laws against either seeking or aiding abortions, and her tentative attempts to reach out to her closest friends are nervously rebuffed. As weeks pass, without support or clear access, an increasingly desperate Anne unwaveringly persists in seeking any possible means of ending the pregnancy in hopes of reclaiming her hard-fought future.

​​When someone makes a film about abortion in the 1960s, it should convey the danger and risk associated with getting the procedure in a time in which it was illegal. It should illuminate the fear and desperation that comes with not having a choice over what happens to your own body and the lengths women will go to secure that option. Most importantly, such feelings should be communicated to the viewer to help them realize why women having the right to choose whether or not they should have an abortion is something that must be preserved. Where another Sundance Film Festival title, “Call Jane,” failed in achieving this, Audrey Diwan’s “Happening” magnificently succeeds.

Diwan and Marcia Romano adapted Annie Ernaux’s memoir, set in France in the 1960s, following a popular and ambitious young literature student. She and her friends worry about their exams and go out dancing, and Anne (Anamaria Vartolomei), in particular, is recognized for her gifted academic performance. When she finds out that she’s pregnant, she sees that the future that she wants is in danger and is determined to have an abortion. Her doctor warns her, “The law is unsparing,” but she desperately wants to continue her studies. The film shows how few options Anne has and how the conservative attitudes towards sex at the time mean that she would be not just academically but also socially ruined if she were to continue her pregnancy. One of her friends comments that getting pregnant would “be the end of the world,” and it certainly seems like it is for Anne.

One of the best things about “Happening” is how it shows the isolation of Anne’s predicament. Early in the film, Diwan establishes her affectionate relationship with her parents and her close friendships with Brigitte (Louise Orry-Biquéro) and Hélène (Luana Bajrami) so that we feel their loss when they fall apart. Anne’s parents place pressure on her to do well academically, and her long-distance paramour is little help with the situation. The audience can’t help but feel Anne’s loneliness and lack of someone she can turn to in desperation.

As the film goes on, it becomes more harrowing to watch as Anne’s grades slip, and she gets hopeless in looking for solutions. Even obtaining information about getting an abortion is dangerous because it’s a taboo subject, and she knows that her time is running out as her pregnancy progresses. A scene in which she tries to abort the fetus herself is particularly difficult to watch because of how expressive Vartolomei is, giving the reader insight into Anne’s physical and emotional pain. Vartolomei’s performance is one of the film’s highlights as she takes Anne from a confident and strong young woman to one who feels at the end of her rope. Her ability to express her emotions in subtle ways is only rivaled by her bigger acting moments when Anne is in physical pain, making us feel every grueling moment with sincerity and empathy.

The last fifteen minutes of this film are genuinely horrific to watch, giving us perhaps a closer view than we want and forcing us to contend with what getting an abortion really means for Anne. The intensity of both the acting and the directing keep us locked in the moment with Anne, but it’s a testament to the severity with which this film treats its topic. The pacing in the first two-thirds of the film can be rather slow, but it serves as a good contrast to the frenzy of the last third.

“Happening” excels because it shows the horrible lengths that women have had to go to in order to get an abortion. The film never becomes preachy or takes a political stance but instead lays out for the audience the danger that Anne puts herself in for the chance to save her future. Diwan and Romano’s script is not pro-choice in its explicit messaging but simply because we are given a view into what happens to women who aren’t given a choice. Unfortunately, the film is relevant today in the United States as the rights given to women by Roe v. Wade are being threatened once again. Diwan’s film, aided by Vartolomei’s strong performance, indicates what many women could experience if the worst comes to pass. Sadly with what’s happening in our country today, that reality is closer and more frightening than ever before. “Happening” is an excruciating reminder of just how important a woman’s right to make choices about her own body is and why such a right needs to be upheld.