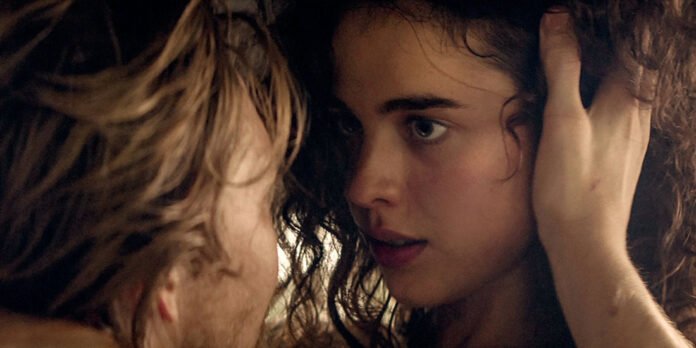 THE STORY – In 1984’s Nicaragua, a mysterious English businessman and a headstrong American journalist strike up a romance as they soon become embroiled in a dangerous labyrinth of lies and conspiracies and are forced to try and escape the country.

​Despite being one of France’s leading auteurs, the best works of Claire Denis have ventured away from her native country. From her directorial debut, “Chocolat,” to “Beau Travail” to “White Material,” Denis has infused her material with her experiences from her upbringing as a West African colonist since she was a young girl. Because of that life, Denis has always found herself an outsider in French cinema, which bleeds into her characters, and the circumstances they find themselves in. Who else would come up with the idea of the “Fuck Box” in “High Life” than Claire Denis? Despite emulating that same feeling of otherness as she transplants two white people into Central America for “Stars At Noon,” Denis’s English-language feature is an unfortunately poorly made and uninteresting story of love in the wrong place and time.

“Maid” star, Margate Qualley, plays Trish, a failed journalist stuck in Nicaragua. To make ends meet, she enters into sexually charged relationships with influential figures. Her dead-end way of life soon gets turned around by the sudden appearance of Daniel (Joe Alwyn), another journalist. Daniel’s exact line of journalism is a complete mystery, but he’s got enough money and good looks to become Trish’s next fling.

Despite the story saying that the two characters immediately hit it off and fall madly in love, it’s impossible to see that on the screen due to the severe lack of chemistry between the two stars. Reportedly, Alwyn was Denis’ third choice for the role of Daniel after initially casting Robert Pattinson and Taron Egerton. Having either of those two in the role would have spiced things up, but it’s doubtful they could have saved this mess either way. None of this is to say Denis doesn’t try to make the sparks fly between her two love birds. Approximately eight sex scenes are peppered throughout, each one seemingly being used as a life preserver to sustain waning audience interest.

To Qualley and Alwyn’s benefit, no one could make bricks from straw with the dialogue handed to them. During about the fifth sex scene, Alwyn’s passionless reading of the line “suck me” seemed to have broken the minds of the uninterested Cannes Film Festival audience, with unintentional laughter spreading like wildfire throughout the crowd. There’s also the embarrassing Zoom cameo by John C. Reilly, who’s clearly talking to a screen in his backyard, and the odd introduction and relationship of Benny Safdie as a CIA agent tasked with uncovering Daniel’s work which is never truly revealed.

Set in either the 1980s or modern-day, depending on what logline you’re given (even though the presence of smartphones and COVID-19 kind of makes the 1980s setting a bit of a stretch), “Stars At Noon” is an adaptation of Denis Johnson’s novel of the same name. While the timeline of the events is different than what’s presented in the book, the basic plot remains the same, which also inspires several questions when watching Claire Denis’ adaptation. If the events have been changed to the modern-day, why has the ultra-80s plot of the CIA meddling with Central American politics in fear of communism remained unchanged? Maybe Denis is trying to infuse her trademarked otherworldliness into this story, even if it backfires completely and strips away any of her usual political and cultural bite?

That same tactic seems to have inspired the film’s editing, which, according to reports, was rushed in order to be submitted in time for the Cannes Film Festival. Based on the eye test, those reports seem to have been confirmed, with scenes being so fragmented that they might as well have been transported out of a Terrence Malick film.

“Stars At Noon” is a rare instance of nothing working as well as it should, especially for such a skilled and revered director as Claire Denis. Because of its down-to-the-wire production timeline, all non-Cannes viewers may benefit from the film being possibly re-worked before general release. But until then, Denis’ return to the prestigious film festival after all these years has resulted in a hugely disappointing and slightly embarrassing work that wastes a wonderful opportunity to combine the talents of all those involved.

"STARS AT NOON"<b>THE GOOD - </b>Margaret Qualley plays her role with fierce playfulness, and the score by Tindersticks salvages a few scenes.<br><br> ​ <b>THE BAD - </b>Fragmented direction and wooden dialogue make for a lifeless plot and a romance that never seems to be going anywhere. Claire Denis is unable to find her voice in the material.​<br><br> ​ <b>THE OSCAR PROSPECTS - </b>None<br><br> <b>THE FINAL SCORE - </b>4/10<br><br>