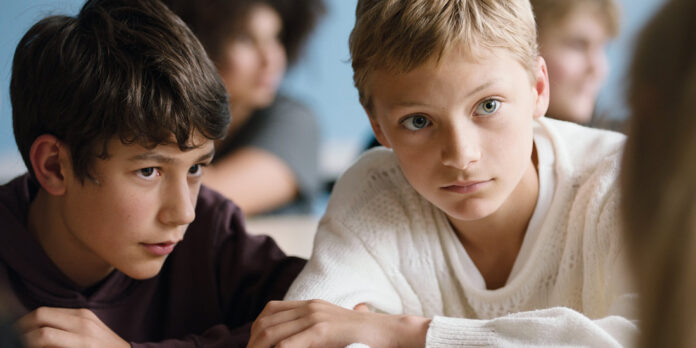 THE STORY – Léo and Rémi, two thirteen-year-old boys, have their close friendship suddenly thrown into disarray as the prospect of adolescence looms. Trying to understand what has gone wrong, Léo seeks comfort and grows closer to Rémi’s mother, Sophie, as the boys pursue forgiveness and reconciliation to try and get their friendship back together.​
​
THE CAST – Eden Dambrine, Gustav de Waele, Émilie Dequenne & Léa Drucker

The second film from Belgian wunderkind Lukas Dhont, “Close,” marks his return to the Cannes Film Festival after claiming the Queer Palm and Golden Camera for his 2018 feature directorial debut, “Girl,” which similarly dealt with gender dynamics and how an outsider can disrupt non-conventional relationships as his latest film does with “Close.” Filmed in ultra-high-definition with immense precision, “Close” further establishes Dhont and his regular cinematographer Frank van den Eeden as two special up-and-coming purist craftsmen. Backed by two powerhouse performances, his latest film will undoubtedly have a substantial impact on some audiences, but given his penchant for overbearing drama, it might be too much.

Growing up on neighboring homesteads in the Belgian countryside, Leo (Eden Dambrine) and Remi (Gustav de Waele) have been inseparable all their life. The two thirteen-year-old boys can often be found acting out pretend battles, riding their bikes as fast as possible, and telling stories to each other during sleepovers. To them, their intimate relationship feels normal. They’ve created their perfect world where they are the only two inhabitants who can truly understand the other. But to outsiders, specifically the inquisitive and suspecting kids in their class, there seems to be more under the surface. Some teasing and questioning about the closeness of their relationship seem to stick with Leo more than Remi. Both boys genuinely deny that they are anything more than best friends, but that answer brings no satisfaction to either party. The pressures of conforming to these societal tensions lead Leo to create some distance between himself and Remi. He wants to hang out with the “cool kids” and be perceived as “normal,” including taking up ice hockey and other conventionally masculine activities. To Remi, this is a betrayal of their lifelong friendship and how he sees himself, which initiates a chain reaction culminating in tragedy.

There’s a feeling of epic openness with the lush Belgian flower fields beckoning you to run through them just as the boys do in one entrancing tracking shot. But there’s also intimacy in the climactic scene where the camera holds on to a close-up of a mother for what seems like an eternity as she ponders how to answer her son’s question. The audience and the characters are trapped in that unbearable moment as the weight of the world is about to topple over, further demonstrating Dhont’s unique gift at capturing human drama at its most challenging and raw, at least for a time…

Like Trey Edward Shults’ “Waves,” Dhont’s film is distinctly split down the middle, with the tragic moment acting as the dividing line between the film’s first half and its second. The lightful questioning of the first half is immediately replaced with darkness, which Dhont isn’t able to handle with the same amount of depth. He traps his characters and the audience in a revolving door of suffering, making them go round and round a few too many times before they can move on. While not as extreme, it does often feel burdened by the influence of the provocative work from the likes of Lars von Trier. Just as the Danish bad boy can often be quite controversial, the reception to Dhont’s latter material may be as well. But even in its dark excessiveness, there’s still great beauty within all aspects of the production. While Dhont can’t handle both sides of the dramatic coin fully, Valentin Hadjadj’s wondrous score is entirely up to the task. With fluttery strings and stinging violins, Hadjadj impeccably accentuates every moment with beauty, helping to lighten the blows Dhont’s screenplay delivers.

Eden Dambrine, playing Leo, is a revelation. Bringing tenderness to his emotionally and physically wounded character, he always finds his way to push through the material to deliver something unforgettable. The same can be said for Gustav De Waele, who handles his character’s questioning with a necessary delicacy. Even if the film’s handling of its subject matter wanes, the performances from these two gifted young boys are nothing short of astonishing.

As a filmmaker, Lukas Dhont is both mature and immature. At the young age of thirty-one, he can carefully find the emotional core that unlocks his sweeping coming-of-age stories of love and acceptance. But like many young directors, Dhont takes the emotion hostage as he churns it out with unnecessary furiosity, hitting his audience over the head with it until they either submit or turn away. With a better sense of balance, we may soon have ourselves one of the premier filmmakers on the international scene.