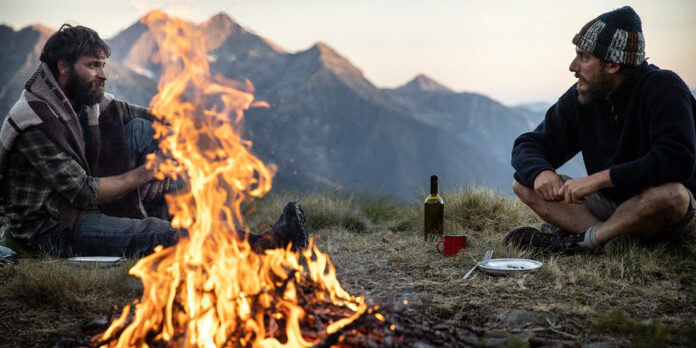 THE STORY – The Eight Mountains is the story of a friendship. Of children becoming men who try to erase the footprints of their fathers, but who, through the twists and turns they take, always end up returning home. Pietro is a boy from the city, Bruno is the last child of a forgotten mountain village. Over the years Bruno remains faithful to his mountain, while Pietro is the one who comes and goes. Their encounters introduce them to love and loss, reminding them of their origins, letting their destinies unfold, as Pietro and Bruno discover what it means to be true friends for life.

​​​When a film takes place in locations as beautiful as the mountains of Italy, as “The Eight Mountains” does, not much effort has to be put in to capture the beauty of such a vast and lush location. Yet directors (and real-life partners) Felix van Groeninger and Charlotte Vandermeersch continually push the limits with this visually breathtaking film. Each shot in their latest is meticulously thought out, with the long takes helping to immerse the audience into this world, story, and characters. This is one of many reasons why “The Eight Mountains” is a captivating cinematic experience that must be admired on the biggest screen possible.

Based on the Italian novel “Le Otto Montagne” by Paolo Cognetti, the story is deceptively simple, as it focuses on a boy named Pietro (“Martin Eden’s” Luca Marinelli) and his relationship with his family, his friend Bruno (Alessandro Borghi), and the landscapes surrounding them. Spanning across numerous decades, the audience sees Pietro grow as he reconnects with loved ones and travels across the world to find where he belongs. It is a story that many audience members will be able to connect with on a profound level, whether it is the sense of grief or feeling out of place within the world. Groeninger and Vandermeersch find ways within the story to explore themes of despair and loneliness not just through dialogue but also through striking symbolism, which helps bring these themes to life in a poignant and dramatically effective manner.

The progression across the decades in this story feels organic, making the timeline clear and easy for the audience to follow. The film’s opening delves into Pietro’s childhood, showing how he first connected with his friend Bruno and became fascinated with the expansive mountain landscapes. There is less focus on Pietro’s adolescent days, but some key moments are introduced in this section that later becomes pivotal to Pietro’s journey. The film’s primary focus is on Pietro’s adulthood, allowing for a mature lens to take over the story and concentrate on darker, more complex themes. Not only does this span of time allow the audience to connect with the leading characters and see the journey they will go on, but it allows the film to mature alongside them and pack a powerful gut punch by the third act.

“The Eight Mountains” predominantly takes place high up in the beforementioned Italian mountains, but there are also sequences down on the ground and across various parts of the world. As the story travels across the globe to other countries, the multiple attractive environments add weight to the storytelling and offer a beautiful canvas for the audience to get lost in. While some scenes in areas such as Nepal have less of an emotional impact and take the viewer out of the gorgeous locations they’ve become comfortable with, these scenes are still vital to the narrative and allow the story to expand outside of just the two leading characters we’ve gotten close to. It would have been nice to see a solid conclusion to these storylines, but they serve their purpose in the end and help add weight to the narrative regardless.

The central aspect that will make or break “The Eight Mountains” for viewers will be the pacing. Clocking in at nearly two and a half hours, the story is incredibly straightforward for such a lengthy runtime. The narrative is your typical international, meditative slow burn, featuring many extended shots of mountains and tasks such as building a house and sitting by the fireside. Not every sequence within the film is wholly necessary, yet there is peace to be found within the deliberate pace and the uninterrupted takes. The editing style is consistent throughout and further helps create a serene viewing experience that allows the audience to immerse themselves into the landscapes as if we are part of the journey with the characters.

Considering the heavy themes and hard-hitting narrative, it would have been so easy to have this film be filled with a sense of gloom and despair. There are moments within it that do strike an emotional chord. Still, Groeninger and Vandermeesch find a balance within those moving turns to show growth and express a moment of clarity for the characters within these more brutal scenes. Some people may still find the film’s tone to be overwhelmingly depressing, but it is also easy to recognize its tranquil heart. It may not conclude on the most cheerful of notes, but where Groeninger and Vandermeesch leave the audience during the film’s final moments is a perfect way to end a journey of this nature and scale.

“The Eight Mountains” is filled to the brim with beauty, not just visually but subconsciously. The contrast between the snowy landscapes and the warm firesides showcases both the cold and distant struggles the two leading characters face alongside the comfort of them being side-by-side at their most grueling moments. Don’t be intimidated by the runtime; just allow the film’s cinematography and intimately epic story to take their time to wash over you.

​"THE EIGHT MOUNTAINS"<b>THE GOOD -</b> The film is gorgeously shot and deliberately edited together to tell an intimately epic story spanning numerous decades. The premise is simple but captivating, making it easy to connect with the leading characters.<br><br> <b>THE BAD -</b> It is a slow burn, and with a long runtime, some viewers may not find enough within the story to remain engaged throughout. The scenes away from the mountains are less captivating.​<br><br> <b>THE OSCAR PROSPECTS -</b> Best International Feature Film & Best Cinematography<br><br> <b>​THE FINAL SCORE -</b> 8/10