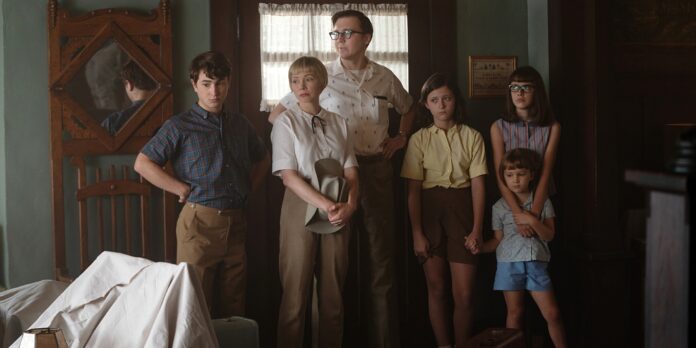 Now that “The Fabelmans” is out in theaters and the next stage of awards season looms, we will soon have a better idea if it is the heavy Best Picture favorite many assume it is. Because it has Steven Spielberg directing his own origin story and all its other presumed Oscar-friendly elements, it is easy to assume it will coast to a wire-to-wire win – the direct opposite of “CODA’s” historic rally in the final stages of last season. But if “The Fabelmans” wins, it would be the second straight family drama about a teen torn between artistic dreams and their family to win Best Picture. And as much as many of us joke or rant about the Academy choosing the same kinds of winners over and over again, that kind of back-to-back type of Best Picture winner does not usually happen. In fact, it might be the best sign that “The Fabelmans” isn’t as locked in as some might think.

Granted, “CODA” and “The Fabelmans” are two very different examples of the same basic premise. They are both about a family of outsiders, with “CODA’s” mostly deaf modern-day family and “The Fabelmans’” Jewish family in 50s and 60s Americana. But of course, unlike “CODA,” “The Fabelmans” is based on its director’s true story, has a young lead character hoping to direct movies instead of sing songs, and has parents with a far more fractured and ultimately broken marriage.

Despite “CODA’s” various voter-friendly elements, it was not seen as a typical contender or even one with a real serious chance most of last season until winning at SAG and the PGA. On the other hand, “The Fabelmans” was pegged as a likely Oscar winner from the minute it was greenlit, and very little has happened to change that since. As such, after a season where the Best Picture winner defied all stats and expectations, it might make logical sense for a more predictable season-long heavy favorite to follow suit – especially one in the same basic genre that worked for last year’s winner. Yet historically, both in the preferential ballot era and beyond, the same type of movie – no matter how different they are – does not win twice in a row.

Before “CODA” won, the Best Picture winners of the past 10+ years were a road movie in “Nomadland,” a Korean comedy/drama/thriller in “Parasite,” a racial dramedy in “Green Book,” a monster movie romance in “The Shape of Water,” a coming of age film about a young gay African-American man in “Moonlight,” a newspaper drama in “Spotlight,” a one-take showbusiness satire in “Birdman,” a slave drama in “12 Years a Slave,” a true-life thriller in “Argo,” a silent black and white film in “The Artist,” a British royal drama in “The King’s Speech,” a war drama in “The Hurt Locker,” and a film set in India in “Slumdog Millionaire.”

While all or most of these movies have traditional archetypes, cliches, and plotlines the Academy usually embraces, none of them are truly similar – at least in terms of their genre or premise. In fact, the last time one could argue that movies with the same subject matter won two years in a row was in 2006 and 2007, when “The Departed” and “No Country for Old Men” won back-to-back. For all their vast differences in styles and action, they are both dark crime dramas with black comedy elements, helmed by directors who were vastly overdue to win at the time.

Before that, the last time there were consecutive winners in the same genre was back in the 90s, when three straight sweeping romantic dramas/tragedies prevailed from 1996 to 1998. Of course, “The English Patient” and “Titanic” were far more visually extravagant and tragic than the lighter “Shakespeare in Love,” and all three of them worked within different subgenres. Nonetheless, they were all built on romance, forbidden love, historical backdrops, and various degrees of tragic endings, elements which the Academy fell for and cried over three years running.

Ever since, when it comes to Best Picture, the Academy has primarily chosen a different kind of movie every year – at least in terms of them having a different premise and genre every year. Therefore, if “The Fabelmans” wins a year after “CODA” did with the same general premise and genre, no matter how differently they are used, it would be a true back-to-back anomaly.

Last year alone proved how rare this is, and not just with “CODA” winning. For much of the year, it looked like a second straight movie with stunning American West landscapes and a female auteur who swept Best Director would win Best Picture instead. While “The Power of the Dog” had vastly different characters and time periods than “Nomadland,” it still looked to be the second straight highly artsy, dramatic, and revisionist kind of Western winner until “CODA” caught it by the tail at the wire. Plus, “The Power of the Dog” was a favorite nearly from the start, just like “The Fabelmans” has been, proving how rare wire-to-wire winners are these days as well.

No matter how many people say “The Fabelmans” would be a very typical and predictable winner, it really wouldn’t be in this particular context of Oscar history. In fact, such history suggests that the most likely winner would be the furthest thing from “CODA” or something somewhat more different than “The Fabelmans” is. And there is no shortage of contenders vastly different from both “The Fabelmans” and “CODA,” like the multiversal epic “Everything Everywhere All At Once,” the Irish black comedy “The Banshees of Inisherin” or the female-driven #MeToo parable “Women Talking.”

“Everything Everywhere All At Once” might come closest to them since it is also a movie about a fractured family of outsiders at its core and the main character torn between family and literal other worlds. Nevertheless, “The Fabelmans” and “CODA” each stay in one world, have no fantasy or sci-fi detours and don’t have universe-threatening stakes or action. While “Everything Everywhere All At Once” could well copy “CODA’s” award season path and surge with a late passion vote to victory, it is still a vastly different kind of contender than “CODA” is – and one likely to do far better on nomination morning first.

Yet if we live in a time where something like “CODA” can win it all with so few traditional Oscar precursors, and where something as insane as “Everything Everywhere All At Once” can be a serious threat this year, maybe other unprecedented outcomes aren’t so impossible. Perhaps the Academy will just stick with what they know and traditionally vote for, which they usually do as it is in many other ways and categories. And maybe since this is Spielberg delivering what could be his career-capping origin story, “The Fabelmans” could be far too formidable for any film to knock off after all.

Even so, as predictable and typical as it might sound to have “The Fabelmans” win, it would still look far more atypical for a film like it to win so soon after a movie like “CODA.” As lazy as the Academy is often accused of being, even and especially when it comes to Best Picture, it doesn’t generally repeat itself two years in a row like this. In fact, considering how the last several years have not just had unprecedented types of Best Picture winners but an almost whiplash-inducing difference between winners from year to year, it is unlikely to see the same type of winner two years running in this era. “The Fabelmans” and “CODA” are really not the same movie, but they are similar enough in the most basic ways to be two of a kind. As such, that makes “The Fabelmans” a far shakier favorite than perhaps many would consider it to be right now.

Of course, even if “The Banshees of Inisherin,” “Women Talking,” or recent Gotham Award winner “Everything Everywhere All At Once,” surges ahead during critic awards season, most everyone will still expect industry voters to put “The Fabelmans” over the top in the end, because it’s just what they presumably do for films like that – most of the time. Yet in Best Picture, they don’t generally do that two years in a row, especially these days. If any recent Oscar history gives “The Fabelmans’” rivals hope to hold on, that would be it, no matter how much everyone expects the industry to rally around Spielberg. But if they do things as they’ve usually done in Best Picture for years, that would not give Spielberg or “The Fabelmans” the kind of advantage many would think it does.

Do you think “The Fabelmans” is still the frontrunner for Best Picture? What are you currently predicting at this time? Please let us know your thoughts in the comments section below or over on our Twitter account and be sure to check out our latest Oscar predictions here.