“THE SHAPE OF WATER” 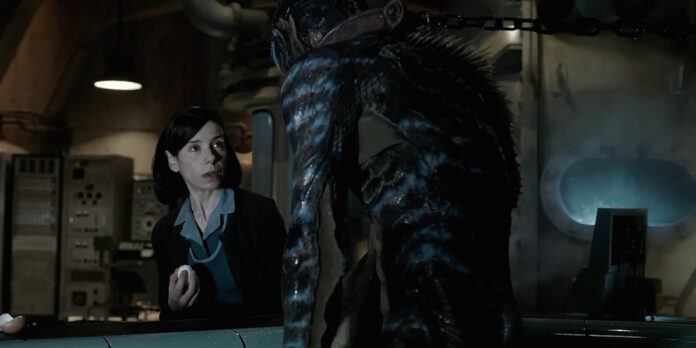 THE STORY – Elisa is a mute, isolated woman who works as a cleaning lady in a hidden, high-security government laboratory in 1962 Baltimore. Her life changes forever when she discovers the lab’s classified secret — a mysterious, scaled creature from South America that lives in a water tank. As Elisa develops a unique bond with her new friend, she soon learns that its fate and very survival lies in the hands of a hostile government agent and a marine biologist.

​Guillermo del Toro has been at the forefront as one of the best storytellers of our time. His imagination has given us such a varied list of unique films. He has been a part of blockbuster filmmaking with films like “Pacific Rim” and the two “Hellboy” films. He has done comic book films such as “Blade II.” He has done gothic horror films such as “Cronos,” “The Devil’s Backbone” and “Crimson Peak.” And for my money, he has made one masterpiece with the Academy Award-winning film “Pan’s Labyrinth.” With “The Shape Of Water” del Toro may have hit all of the right notes to make the Oscars take notice yet again but this time in higher profile above the line categories such as Best Picture, Best Director, Best Actress and Best Original Screenplay. “The Shape Of Water” is a whimsical, beautiful and transcendent film that features all of the best of what del Toro has to offer.

Taking place in an underground US government lab in 1962, Elisa Esposito (Sally Hawkins) is a mute janitor who works alongside her friend Zelda Fuller (Octavia Spencer). Living a lonely where the only two people who can communicate with her via. sign is her gay neighbor (Richard Jenkins) and her co-worker Zelda Fuller (Octavia Spencer), Elisa goes about her daily routine of waking up in the morning, taking a bath, masturbating in the tub, hopping on the bus to work and then cleaning up other people’s mess. One day, an unknown fish-like monster known as The Asset (Doug Jones) is brought into the lab by Colonel Richard Strickland (Michael Shannon) to be studied by Dr. Robert Hoffstetler (Michael Stuhlbarg) so that the Americans can learn about its kind before the Russians do. Elisa forms an unlikely friendship with the creature that blooms into something more as their connection is one that transcends race and species.

Guillermo del Toro’s screenplay for “The Shape Of Water” is an attractive one. Filled with beautiful imagery, a wonderful fairytale-like story, and enough characterization to make all of the characters stand out, the screenplay is one of the finest he has ever written. Its message of love and like water, being shapeless, thus having no boundaries, is an endearing one that we so desperately need in such dark and depressing times. It’s no surprise that his screenplay features a Latin American disabled woman in the lead role, her gay best friend neighbor, her black co-worker and a foreigner who helps her out, all against the straight, bigot, racist white man played frighteningly well by Michael Shannon. del Toro is making a statement on how love has no prejudice towards gender, race or creed and those who seek to stop or destroy it are the enemy. All of this is wrapped up in a romance that may be the most unusual yet organic one you’ll find in the cinema all year. Yes, it does constitute as bestiality and yes, this film does not shy away from its casual depiction of sex and the yearning for it. But del Toro’s colorful cinematography, dream-like vision, lavish production design and hypnotic soundscape all put you in a headspace to suspend your disbelief and recognize this story for what it is: a fairytale. Taken literally, it is easy to see why people may be turned off to the film or disregard it entirely as being too “out there.” However, those who are understanding of what del Toro is putting forward here, will find plenty to feast upon both visually, aurally and intellectually.

Sally Hawkins is absolutely fantastic as the mute Elisa. She conveys more with her facial expressions and body language than words could ever do for her. She has always been one of our most underrated actresses, always floating below the radar despite positive reviews for “Happy Go Lucky” and an Oscar nomination for “Blue Jasmine.” With “The Shape Of Water” don’t be surprised if she receives her second nomination for her work here. A stated before, the screenplay’s characterization gives the supporting cast enough depth, tics and side stories of their own in order to allow them to create fully fleshed out performances. Jenkins, Shannon, Spencer, and Stuhlbarg are all terrific here making for one of the best ensembles of the year.

Guillermo del Toro’s imagination, as always translates towards the craft categories. The film’s editing helps it breeze right on by with no scene or moment feeling like it is out of place. The fluid, brightly lit and colorful digital cinematography mesmerizes. The intricate detail in the set design makes the world of 1962 feel rich and lived in. The score by Alexander Desplat is playful and a delight to listen to. With Richard Jenkins’ narration guiding us along the way, “The Shape Of Water” is another example of Guillermo del Toro’s ability to tell stories on a grand level that can feel transportive, significant and boundless. His message of love and the things that unite us together such as food, language, music and especially the movies, is one that should be cherished by cinemagoers and like any good story, passed on to those who have not yet heard it.