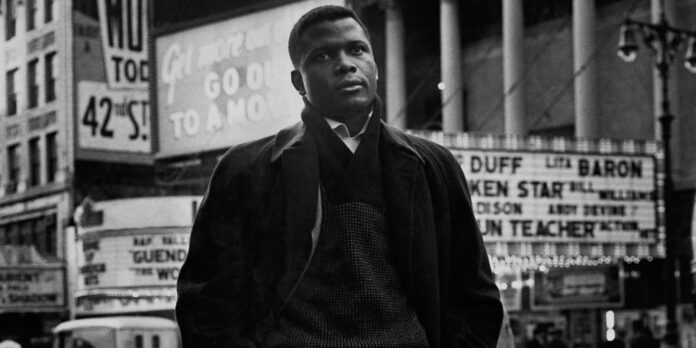 THE STORY – Follow the real life story of Sidney Poitier, the Oscar winner of 1964.

When a figure looms large in popular culture, there is a natural inclination to discover more about their artistry and biography. For someone possessing the caliber of character that inhabited Sidney Poitier, there is an infinite fascination for the life of such an influential man. Many historical touchstones have been featured in the wide span of his life, a role that has meant so much to not only a single industry but perceptions of the world at large. These strong emotions resonate even deeper after a recent passing, and while “Sidney” was conceived before the star’s death, it acts as a loving tribute to all his accomplishments. Unfortunately, it does so at the expense of a more meaningful examination.

As one could imagine, the film lends its gaze to the triumphant life and career of Sidney Poitier. It starts with his humble roots growing up in the Bahamas and Florida, eventually fleeing to escape the intolerant levels of racism he was forced to endure. He ends up in New York City, and it is here where his passion for performance inspires him to pursue an acting career. His determination for success is buoyed by the refusal to take any subservient role, a defiant stance to declare as a Black actor working in the 1950s. By sheer talent and perseverance, the world watches Poitier ascend to a status that no actor of color had ever been to before. Whether becoming the first Black man to win the Best Actor Oscar, his commanding confidence behind the camera, or the unwillingness to compromise his moral principles, the legacy of Sidney Poitier is explored with earnest reverence.

Said reverence may be the motivation of this project, but it often impedes it from becoming a more substantial work. The praise heaped upon Poitier is constant and ever-flowing, yet one cannot help but wish a more nuanced portrait was being presented. In fairness, some moments are discussed that serve to humanize him, particularly in discussing his failed marriage that ended due to an affair with Diahann Carrol and his pristine screen presence that was being scrutinized once Black culture was becoming more radicalized in the 1970s. However, these criticisms are only briefly addressed in an attempt to humble this saint only mildly. One would not expect a damning expose on such a beloved personality, but the hagiography is inescapable. In truth, the film seems more interested in providing a glossy and shallow history lesson rather than the more intricate details that make up a more captivating analysis. What’s displayed is a wealth of interesting observations that lack any sort of engaging complexity.

That isn’t to say there is no value in this inspection. As much of the film is highlighted by Poitier himself, it’s impossible not to be taken in by his oration. The regality he imprinted on every frame of film through his performances comes through in his retellings, and there is a majesty in his voice that invites one to appreciate the tales he is regaling. The narrative it tackles sets itself on a fairly straight path from beginning to end without too much deviation. However, the burst of energy is felt when delving into the comradery he maintained with Harry Belafonte. It’s by far one of the most compelling elements of Poitier’s career, showcasing a rivalry yet deep respect between two vital figures in the community. It speaks to how the surrounding interviews with Poitier’s contemporaries are much more engrossing than more modern perspectives. Director Reginald Hudlin’s serviceable filmmaking does manage to texture the storytelling nicely with archival footage and consistently imbues the piece with a warm devotion. One wishes for a more sophisticated execution, but it’s hard to deny the alluring aspects of an incredible journey.

There’s a moment in “Sidney” in which Poitier describes a profound moment after he came into this world as a premature baby. Frightened that he may not survive, his father prepared for the worst while his mother refused to accept such a reality. She sought out a soothsayer who told her not only would her son live, but he would be famous and respected. While it’s an inspiring recollection, it also plays right into the canonization of Poitier, which is rarely challenged. The objective is clearly to celebrate his monumental achievements, but such tasks can be realized without coming across as a hollow undertaking. Still, while it never scrutinizes beneath the surface nor thoroughly interrogates the complicated forces at play, it’s easy to be wrapped up in such an absorbing character. One yearns for more, but what is illustrated in a fine memorial to an irreplaceable artist and activist.

<b>THE GOOD - </b>A warm and loving tribute to Sidney Poitier is presented with genuine admiration. Poitier is a compelling orator, and there are some captivating explorations of his life and relationships.<br><br> <b>THE BAD - </b>The film presents a shallow portrait of the man, reveling in hagiography and rarely delving into a more complex analysis. Some of the other interviews are not as impactful.<br><br> <b>THE OSCAR PROSPECTS - </b><a href="/oscar-predictions-best-documentary-feature/">Best Documentary Feature</a><br><br> <b>THE FINAL SCORE - </b>6/10<br><br>"SIDNEY"