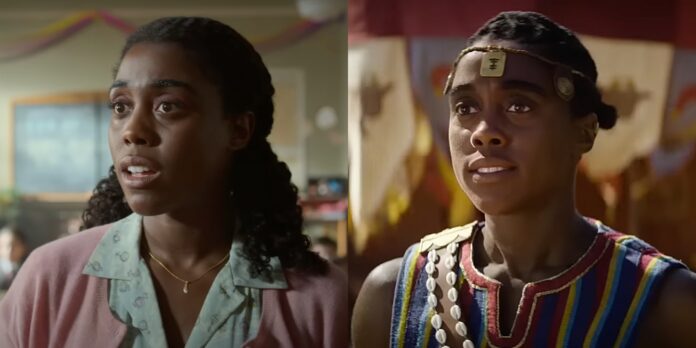 The film festival season has wrapped up. Meaning most films that will be competing for this year’s Oscar have already been seen, except for a few big studio titles that skipped the festival circuit altogether (“Babylon,” “Avatar: The Way of Water,” “I Wanna Dance With Somebody,” for example). Some studios have begun sending out FYC screeners, actors have chosen what category to compete in, and FYC panels and events have begun. Critic groups will soon begin to vote and present their own awards. These awards can (and usually will) determine which films and artists have legitimate chances of making it into the final five (or, in the case of Best Picture, ten) slots. And as we begin to move from the festival to the critic and precursor section of the awards race, it’s important to remember some films or performances that have the potential to fall between the cracks simply due to an early release date. One such performer is Lashana Lynch for two vastly different performances in Gina Maria Prince-Bythewood’s “The Woman King” and Matthew Warchus’s “Matilda The Musical.”

Lashana Lynch is having a phenomenal year; a phenomenal couple of years, in fact. After gracing the screen as the first female 007 in 2021’s “No Time To Die,” which received critical praise and an Oscar for Best Original Song, and portraying a variant of Captain Marvel in “Doctor Strange in the Multiverse of Madness,” Lynch has quickly become one of Hollywood’s in-demand actors, so much so that she won the BAFTA EE Rising Star Award last year. This fall, she is starring in two films, Sony Pictures’ “The Woman King,” which was released this September, and Netflix’s adaption of “Matilda The Musical.” Now, at the current moment, not many Oscar pundits have Lynch in their Best Supporting Actress predictions, which is curiously perplexing, considering how up in the air the category is and how much of a force Lynch is as a performer.

“The Woman King” was one of the few box-office triumphs of September. It currently has a 94% on Rotten Tomatoes, an A+ CinemaScore, and exceeded its opening box-office projections. “The Woman King” is considered a success, and one of the reasons the film is beloved is due to its ensemble. Now, while the category placement of Viola Davis (who will be campaigning for Best Actress) and Thuso Mbedu (who will be campaigning for Best Supporting Actress) may cause a bit of a debate, Lynch’s Izogie is clearly a supporting player. Izogie’s role in the film is to guide and support Mbedu’s Nawi. She is the ideal warrior that believes wholeheartedly in the ways of the Agojie. She’s a towering presence in the film, whose silent gazes and reactions command stoic attention and fierceness. She’s meant to be feared, but she also has this immense capability to love and mentor. Izogie is a warrior with a capital W who will do anything for her fellow soldiers. She is the ideal Agojie, and Lynch perfectly shines in every moment she’s given.

But on the complete and opposite end of the spectrum is Miss Honey in “Matilda The Musical.” Miss Honey, Matilda’s school teacher, embodies purity and innocence. She wants to help Matilda while simultaneously struggling to help herself. Much like Izogie’s relationship with Nawi, Miss Honey and Matilda’s relationship is the heart of the story, which gives Lynch a pretty important job in both films. Lynch’s characters need to have a strong emotional connection to their protagonists – and by extension, the audience – for the story’s progression and characters to work. And judging from the early reactions out of the London Film Festival, Lynch did her job exceptionally in both.

Which brings the question, why is no one talking about Lynch’s legitimate potential in Best Supporting Actress? With Michelle Williams and Margot Robbie officially competing in Best Actress for “The Fabelmans” and “Babylon,” there is an open spot for grabs. At the time of this writing, it seems safe to dedicate two of the five slots to “Women Talking,” but everything after that is pretty much a question mark. Some films look like across-the-board contenders that can affect this race, like Kerry Condon for “The Banshees of Inisherin” and Hong Chau for “The Whale.” But this category is much more malleable than one might think, and Lynch has two roles that can easily find at least one spot. It’s important to remember that Miss Honey was the maternal character for an entire generation in the 1996 film, and the musical adaption is a Tony Award-nominated role with heartbreaking and beautiful moments for Lynch to shine in. Miss Honey is a vital part, just like Izogie. Plus, with a December release, it’s the perfect time to remind the Academy voting branches of Lynch’s talent.

Lashana Lynch is a rising star. That’s evident. She’s turning in fantastic performance after fantastic performance and is bound to be nominated for an Oscar at some point in her career. But it seems like the stars are beginning to align this year; with two exceptionally strong characters in a pair of well-received films, she has a legitimate chance. Best Supporting Actress is extremely loose at the moment, with many different possibilities. Still, little to no predictions lists have included Lynch for either “The Woman King” or “Matilda The Musical.” At this point in the awards race, it’s important to see every possible path, especially in races that aren’t set in stone. All I’m asking is to consider her.

Do you think Lashana Lynch will be nominated for an Oscar this year? If so, which performance do you think she has the better shot with? “The Woman King” or “Matilda The Musical?” Please let us know your thoughts in the comments section below or on our Twitter account and be sure to check out our latest Oscar predictions here.