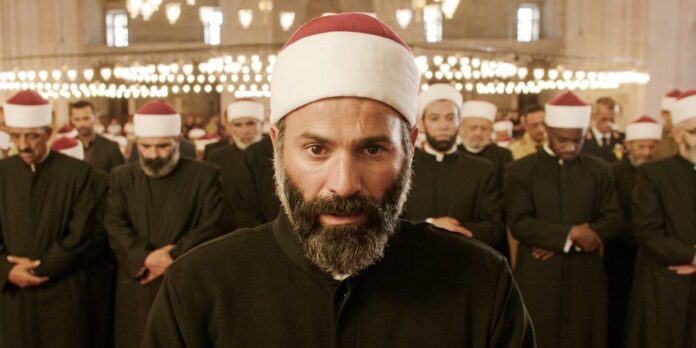 THE STORY – Adam, a fisherman’s son, is offered the ultimate privilege to study at the Al-Azhar University in Cairo. When the Grand Imam suddenly dies, Adam becomes a pawn in a ruthless power struggle between Egypt’s religious and political elites.

The world of politics will always be an intriguing place to analyze. Witnessing the competing interests and subtle manipulations play out can be a fascinating exercise in how tenacious and sometimes deadly the quest for power can quickly escalate. There are many settings to explore such a thesis, and none seem more appropriate than in the realm of organized religion. It’s a landscape in which many rise through its ranks with personal ambition that forces cunning planning to commence, and the execution of such arrangements can have far-reaching consequences. “Cairo Conspiracy” is set within such an environment, and it ends up being a captivating examination.

Adam (Tawfeek Barhom) is merely the humble son of a local fisherman in Mazala, a small town in Egypt. However, he aspires for a much grander life and wants to commit himself to a greater purpose of learning and understanding. That wish is fulfilled when he receives a scholarship to the Al-Azhar University in Cairo, the country’s most prestigious institution on the teachings of Islamic thought. He is giddy with excitement upon his arrival but soon learns of a more sinister plot being conceived. The current imam has just died, and the vote to replace him is underway. Since the position is highly important both to the university and the state, many forces descend upon this area to influence the outcome. Colonel Ibrahim (Fares Fares), an intelligence officer, forcibly recruits Adam to become an informant and help push the levers to ensure the next choice is one approved by the government. Adam knows he is only a pawn in this dangerous chess game and must move cautiously so as not to be sacrificed for a greater plot.

There is a compelling atmosphere of tension that writer-director Tarik Saleh is able to craft from this premise. He displays a setting that showcases the confluence of religion and politics and the fraught battle between the two that strikes at the core of their similarities. The stakes of dominance and influence at play make the political maneuvering incredibly engrossing. While the filmmaking may not seem particularly exceptional, the perspective breathes life into an immersive sense of space. Saleh’s eye is one of claustrophobic intimacy as the walls start to compress and the nooses tighten around these participants. There are moments when the threads lose some of their absorptions, as the cacophony of competing interests can be tedious to track, and some of the narrative leaps create awkwardness in the storytelling and pacing. Still, the subject is frequently engaging, with a provocative analysis on exposing the hypocrisy of powerful establishments.

Barhom is a solid anchor for the piece, perfectly embodying the naivete that must navigate this harsh framework while also constantly learning to be smarter than his opponents. He captures the nervousness as well as insecure strength, providing a layered portrayal that guides the audience through the levels of mystery. As a counter, Fares has an aura that can be inviting and also intimidating. He presents himself as a weary soul that is beaten down by the bitter whims of a shadowy administration but also can be a frightening figure when necessary. The scenes between the two speak to the commentary on the struggle between these impactful forces, and each is wonderful in their portrayals. The whole ensemble is filled with impressive turns by performers who texture every scene with a rich authenticity, but the focus is mostly on these two central figures demonstrating endearing moments.

While there may be times in which “Cairo Conspiracy” doesn’t hit every note of its story perfectly, it’s difficult not to be engulfed by the mechanics of this backdrop. The sequences that examine this place full of machinations are alluring spectacles of drama, and the performances featured at the center engage in their natural ability to entice one further along the progression. Despite the ungainliness that occasionally flares up in the presentation, the film is an enthralling dissection of both character and theme. It has its own take on one particular corner of the damaging influence of political leadership, and the results are resoundingly appealing.

<b>THE GOOD - </b>The film is a captivating display of political intrigue, with an enticing showcase of tense moments with engaging drama. The performances from the two leads are endearing and compelling. The filmmaking highlights a provocative sense of intimacy along with exploring fascinating themes.<br><br> <b>THE BAD - </b>Some of the storytelling requires narrative leaps, which forces the narrative to become awkward in its presentations. Some plot threads can get lost in the totality of the piece. <br><br> <b>THE OSCAR PROSPECTS - </b><a href="/oscar-predictions-best-international-feature/">Best International Feature Film</a><br><br> <b>THE FINAL SCORE - </b>8/10<br><br>"CAIRO CONSPIRACY"