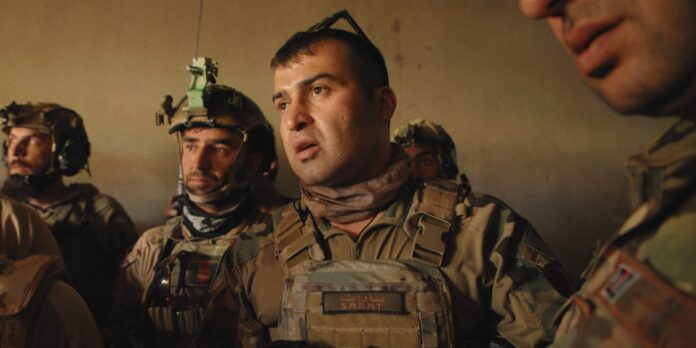 THE STORY – Tells the story of the last months of the 20-year war in Afghanistan through the intimate relationship between American Green Berets and the Afghan officers they trained.

War will always be a subject that attracts attention and curiosity for a multitude of reasons. There are several avenues and perspectives that encompass such a vast enterprise, and there is a plethora of intriguing viewpoints from those embedded directly in the fight and those who look from afar. The United States has had a long, embattled history of involving itself in many conflicts worldwide, and many such excursions have gained bruised legacies. With real-world stories being used as a backdrop, it is no wonder why the issue is perfect material to explore in the documentary format. “Retrograde” examines the fallout from a monumental decision made during a time of war, presenting the results with a stirring and effective reality.

The American involvement in Afghanistan has been known as the country’s longest war. Many will recall how this conflict suddenly ended during the summer of 2021 when President Biden announced he would be pulling troops out of the region and ceasing combat operations. Such a monumental decision was met with mixed responses, though the personnel on the ground faced enormous consequences. There is an immediate recognition that control of the area will quickly fall into the hands of the Taliban without American support, and the local soldiers who trained with the military are ill-equipped to deal with the upcoming difficulties. Under the command of General Sami Sadat, the Afghan forces are determined to keep their country together with fewer allies while facing a tenacious enemy.

Director Matthew Heineman has always been able to capture a captivating perspective with his filmography. His work is able to craft an intimacy that feels textured and authentic, creating a sense of immersion within the environment and immediately opening up a wide lane of empathy with these subjects. The same is felt here as well, with the vibrant filmmaking illuminating this bleak and desperate set of circumstances. There is a warmness seen within the camaraderie in the last days of the American soldiers being stationed that gives way to heartbreak when violence and chaos run rampant. Most of the world could only look at these images from afar, but the film displays in detail the anguish that festered on the ground up close. Heineman showcases these difficult mobilization efforts in a poignant framework that is emotionally affecting.

At the same time, the film is much more successful as an analysis of its procedural elements than any attempt to truly dig deep within character. Despite the large and complicated operation that was put into place, many participants are not revealed to have a great sense of personality outside of Sadat. He is essentially the protagonist this narrative is crafted around, and witnessing his dismay at an escalating set of horrible incidents is compelling. However, that thread of this plot cannot compensate for a sluggish midsection that starts to feel repetitive in its depictions. At that point, even the engrossing aspects that came before can begin to feel somewhat tedious in their exploration. The imagery is still vivid and provocative, but the storytelling could be more consistent, making it more thoroughly absorbing.

It’s hard to deny how harrowing a watch “Retrograde” can be at many points in its illustration of this moment in time. Regardless of any personal feelings toward this decision, it is undeniable that the withdrawal from the region had a devastating impact on those who were left behind. Even when the narrative itself is not the strongest, the overall foundation is one that is quite fascinating. One feels dropped right into the frenzy of those working hard to survive, especially resonant when the final planes start to leave, and the despondent pleas break the soul. It can be challenging to compose the whole portrait with such recent events, and this piece certainly does not fulfill that prompt. However, it does provide a moving portrayal of the true fallout of war and what happens when the darkness overcomes after the light fades away.

<b>THE GOOD - </b>The filmmaking presents a detailed showcase of this setting that feels immersive in the presentation. One is invested in the overall plight, and many of the depictions are heartbreaking and emotionally effective.<br><br> <b>THE BAD - </b>The narrative can get repetitive at many points and causes the pacing to be tedious. Only a little is explored with the inner lives of the people seen, leaving some sections not that interesting.<br><br> <b>THE OSCAR PROSPECTS - </b><a href="/oscar-predictions-best-documentary-feature/">Best Documentary Feature</a><br><br> <b>THE FINAL SCORE - </b>7/10<br><br>"RETROGRADE"