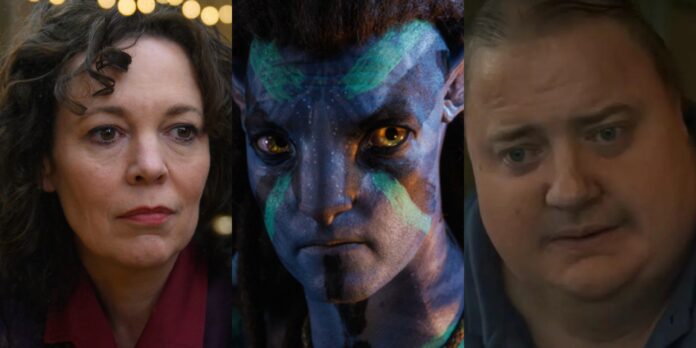 The Awards Audit is a weekly column at Next Best Picture where we dive into the financial performance of this year’s Oscar contenders and analyze how their results impact their prospects for this awards season. This week, the long-awaited sequel to the highest-grossing film of all time debuted in premium theaters to solid results in the middle of its awards season run.

Thirteen years after James Cameron’s “Avatar” became a box office and awards phenomenon, “Avatar: The Way of Water” amassed prosperous results in its domestic and worldwide debut. This domestic opening falls right in line with the $130-$150 million tracking numbers going into the weekend, along with marking a noticeable improvement over “Avatar’s” $77 million domestic debut back in 2009.

Some industry pundits are calling “Avatar: The Way of Water’s” opening underwhelming. While this debut is not smashing box office records, the film still performed well when fully considering the circumstances. The innovative James Cameron epic is the quintessential event film, with 62% of ticket sales domestically stemming from 3D, IMAX, and other premium formats. Premium tickets also come in higher demand for ticket buyers, which leaves some audiences waiting a week or two before getting a chance to see the film. “Avatar: The Way of Water” will maintain its premium theaters until mid-January at the earliest and benefit significantly from the increased ticket prices.

The upcoming holidays represent a viable runway for “Avatar: The Way of Water” to take off financially. Christmas competitors like “Puss in Boots: The Last Wish,” “Whitney Houston: I Wanna Dance With Somebody,” and “Babylon” should perform respectably, but the trio of releases lacks the big-budget allure of an “Avatar” sequel. James Cameron’s sequel will be able to dominate throughout the holidays and preserve its performance during a relatively quiet January frame. It’s already shown more potent legs than most blockbusters, dropping only 16% from Friday to Saturday in its domestic debut.

“Avatar: The Way of Water’s” encouraging financial outlook perfectly aligns with its award aspirations. The film received slightly less enthusiastic critical appraisals than its predecessor (An 82% Rotten Tomatoes score compared to 77%), although the film still generated the same wide-eyed wonderment with most viewers. Word of mouth should remain strong enough for the sequel to remain relevant throughout the awards season, even if it’s not in the same hunt for a Best Picture/Best Director win as the original “Avatar.”

“Avatar: The Way of Water” is currently in line for Best Picture (ranked 6th by Next Best Picture) and Best Director (James Cameron ranked 5th by NBP) nominations, with Best Cinematography and Best Visual Effects looking like possible wins alongside a slew of other craft nominations.

Following its December 13th VOD debut, “The Fabelmans” is beginning to lose relevance in theaters (a $785 per theater average is far from ideal). The autobiographical feature on director Steven Spielberg’s upbringing continues to be a financial disappointment for distributor Universal despite serving as the award season’s early frontrunner. The decision to opt for a VOD release so soon, along with never releasing the film in 2,000+ theaters domestically, remains questionable in hindsight.

NBP is projecting the film to finish in second place now for Best Picture and win Best Director for Steven Spielberg. Nominations for Best Actress contender Michelle Williams (ranked 3rd by NBP), Best Supporting Actor contenders Paul Dano (ranked 4th by NBP) and Judd Hirsch (ranked 6th by NBP), and Best Original Screenplay (ranked 3rd by NBP) seem likely along with a few below the line nominations. The general apathy from audiences towards Spielberg’s latest suggests that the film may be more respected than loved, but only time will tell if the industry feels the same way once the guild awards start getting handed out.

Searchlight Picture’s movie theater-set period piece, “Empire of Light,” remains a niche proposal in specialty theaters. The latest film from director Sam Mendes did sneak into the top 10 thanks to an expansion effort from Searchlight. However, a paltry $538 per theater average shows that the film boasts little appeal with wider audiences. In addition, the muted word of mouth surrounding “Empire of Light” (hovering around 45% on Rotten Tomatoes) and its underwhelming awards campaign did not allow the film to break out.

At this point, a Best Cinematography nomination for Roger Deakins looks like it will be “Empire of Light’s” most promising award prospect (currently ranked 5th by NBP), with recent Golden Globe nominee Olivia Colman not too far behind in the Best Actress predictions. The title will expand to around 600-700 theaters next weekend, but the prospects for this one are starting to dim.

Last weekend, “The Whale” earned the best per-theater average of the year in its six-theater debut. Distributor A24 kept the same course this weekend, experiencing a respectable 48% decline given the lack of theatrical expansion. The latest film from director Darren Aronofsky hopes to connect in its national expansion on December 21st, following a buzzy run during the fall film festival circuit.

I remain intrigued by “The Whale’s” mainstream prospects financially. Brendan Fraser’s lead performance continues to generate Oscar buzz (he’s currently ranked 3rd by NBP), and A24 is well-versed in maximizing the financial potential of niche titles. That said, my expectations remain limited when considering the large crowd of upcoming holiday releases. I am predicting a $2-3 million 3-day opening and a $4-6 million 5-day opening as best.

THEATERS WIDE
Babylon
Whitney Houston: I Wanna Dance With Somebody
Puss in Boots: The Last Wish

Are you enjoying this weekly column series? We’ll continue to deliver this new analysis to track how this season’s awards contenders are doing at the box office for a few more weeks until this year’s crop of Oscar contenders stops releasing in theaters. Is there anything you would like to see in future posts? But also do tell us what you saw this weekend and what you thought of it. What will you be seeing next weekend at the theater? Please let us know in the comments section below or on our Twitter account.