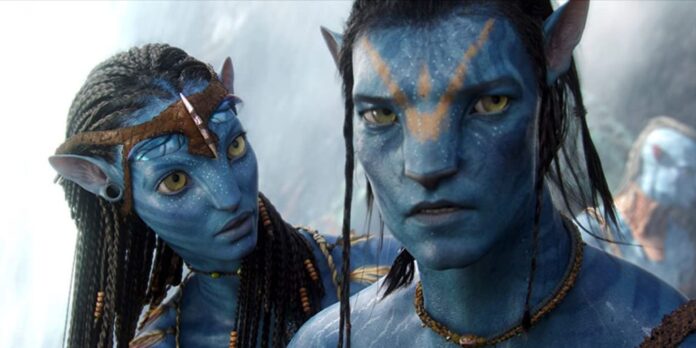 THE STORY – On the lush alien world of Pandora live the Na’vi, beings who appear primitive but are highly evolved. Because the planet’s environment is poisonous, human/Na’vi hybrids, called Avatars, must link to human minds to allow for free movement on Pandora. Jake Sully (Sam Worthington), a paralyzed former Marine, becomes mobile again through one such Avatar and falls in love with a Na’vi woman (Zoe Saldana). As a bond with her grows, he is drawn into a battle for the survival of her world.

“I see you,” says Jake Sully (Sam Worthington) to the Neytiri (Zoe Saldana), and we have certainly seen both of them. There is a certain level of expectation when watching what is currently the highest-grossing box office film of all time, especially when making the journey to watch it on the big screen. Nearly 13 years after its original release, it is clear why so many people would return to the cinemas to revisit Pandora or experience it for the first time, with James Cameron’s “Avatar” bringing in $30 million worldwide in its re-release opening weekend. While there has been plenty of opportunities to talk about the cultural impact “Avatar” has had on the film industry, now is the perfect time for film fans to reflect and see how it holds up after so many years, especially with the upcoming release of the much-anticipated sequel, “Avatar: The Way of Water,” later on this year. Does “Avatar” deserve to be the highest-grossing film of all time, and is this film actually as good as the world has proclaimed?

In 2154, Earth’s natural resources have been depleted. A mission has been arranged by the Resources Development Administration (RDA) to mine the valuable mineral unobtanium on Pandora, a moon in the Alpha Centauri star system. One week before the mission, operator Tom Sully is murdered, and it is up to his twin brother, Paraplegic Marine Jake Sully, to take over his role on the mission and head to Pandora. As the atmosphere of Pandora is poisonous to humans, Jake has to use an ‘Avatar,’ designed to be a hybrid of humans and the native race of the land known as Na’vi, to explore the land and to collect the information required by the RDA. However, after an incident in Pandora where Jake’s avatar is attacked by wildlife, he flees into the forest and is rescued by a female Na’vi, Neytiri. When a sign supposedly comes from their goddess Eywa proclaiming Sully to be special, Neytiri takes Jake into her clan, in which he is slowly initiated into their society. Throughout their time together, Jake and Neytiri fall in love as he is initiated into the tribe, leading Jake to trust the Na’vi over the group of humans that he is working with as part of the RDA mission. When it is revealed that the RDA is willing to destroy the home of Neytiri’s clan to obtain the unobtanium resting underneath their land, it is up to Jake to take a side and help save the land of the Na’vi.

“Avatar” explores two different storylines, opening up with the storyline of the RDA and the mission that Jake Sully will have to take. From the start, it is easy to back Sully as a character due to his tragic backstory. Not only is he paraplegic, creating a sense of restriction with the movement of his human form despite his military background, but he has also lost his twin brother right as the film starts. He has to identify his brother’s body and take over his role despite having no training and no awareness of what he is about to face (though he will be given “his legs back” through the Avatar program). Jake is thrown into the same position as the viewer, as we are also unaware of the mysterious alien land we are about to embark on. Therefore, when Jake first takes control of his brother’s Avatar, there is a rush of excitement both for the viewer and the character. For the first time in years, Jake can stand up and not only walk but run freely. His previous trauma does not restrict him, he is able to live once more, and that rush of freedom is explored throughout the film’s narrative. Even when Jake is offered by the RDA’s head of security force, Colonel Miles Quaritch (played perfectly with hardened machismo hubris by Stephen Lang), to have new legs on the human world, it doesn’t have the same level of freedom and excitement as manning the Na’vi Avatar.

As compelling as that aspect of the ‘human’ story is, “Avatar” thrives due to the Na’vi storyline. Despite acting purely through motion capture, it is Zoe Saldana who gives the best performance in the film as Neytiri, and she is the one that drives the emotion home in the final act. When Neytiri is confronted with the fact that the Avatar she has fallen in love with was initially working alongside the humans who want to destroy her home, she is left rightfully distraught, questioning whether he ever loved her in the first place. In particular, that sequence packs a punch and makes the audience connect with Neytiri and the rest of the Na’vi, going against the worst of humanity in this conflict. This is aided by well-paced montage sequences showing the lives of the Na’vi and the skills that Jake Sully needs to pick up to be initiated into their clan, backed by a majestic score by the late James Horner. This shows a passage of time that warms Jake up to befriending the Na’vi and gaining the audience’s sympathy.

Of course, we cannot talk about a film such as “Avatar” and not bring up the world-building and revolutionary visual effects. The film was a significant step up in terms of what was possible with computer animation and motion capture. Thirteen years later, those visual effects, for the most part, have stood the test of time. The land of Pandora is extraordinary, and it is hard not to be drawn into the production design as every blade of grass had to be generated by some of the most skilled artists in the world and make it all feel believable. There is an emphasis on wildlife and natural beauty with Pandora, which adds an extra layer of magnificence to the land amongst the groundbreaking visual effects. Cameron also fleshes out the world through its history, creating an ecosystem, culture, and way of life that truly feels like its own character. One way this is successfully done is through Eywa, the guiding force of life and deity of Pandora and the Na’vi. Introducing a belief system that connects with the Na’vi physically through the Tree of Souls and the Woodsprite creatures adds some visually gorgeous moments and fleshes out Pandora to make the land feel like it has been lived in long before the events of “Avatar.”

Some people may find the narrative structure of “Avatar” to be predictable (another ‘white savior rescuing the indigenous people’ story again?) and the runtime to drag the pacing a little. However, the film’s presentation remains refreshing, even in 2022. Yes, it does end with an epic battle that probably cost a decent chunk of the budget, reflecting the style of filmmaking that has become widespread in the past decade due to the popularity of the superhero genre. However, the final battle in “Avatar” makes complete sense technically and narratively. The film’s climax reaches a scale that somehow pushes the visuals and sound work to another level, showing how far new technological advances in filmmaking could go. With the variety in fighting styles and locations, from futuristic aircraft and machinery to classic bow and arrows, the action is thrilling, mainly because, by this point, Cameron’s screenplay has successfully gotten us emotionally invested in the characters. Narratively, the battle’s outcome may be predictable and formulaic, but its build-up makes it clear that it will be destructive, thus, elevating the stakes. The RDA is willing to stop at nothing to get their hands on the precious unobtanium, including chasing the Na’vi out of their home by destroying it to get to the source. Not only does it feel like many lives are at stake, but there is reason to care about the lives at stake, particularly in the Na’vi clan. The emotional stakes presented in the final battle make it so powerful, going beyond the physical scale of the sequence and what the visual effects artists achieved to create a stunning, rousing piece of filmmaking.

If there is one director you should not doubt, it is James Cameron. From “The Terminator” to “Titanic,” the man spends time perfecting his craft (ad doing a bit of deep-sea diving in his spare time) which has produced some of the most awe-inspiring filmmaking the world has ever seen. “Avatar” is no exception as he technically exceeds himself, pushing the boundaries of filmmaking to another level and creating new technology to do so in the process. It is easy to get lost in the world-building of Pandora and the gorgeous visual effects, but what is truly impressive is the cohesive narrative and touching human connection presented in the film. While they might be routine in their presentation, Cameron’s characters are all clearly defined, allowing audiences to care about Jake and Neytiri’s story. It is much more than just a film about blue aliens, but how we can connect with another life form and learn from others, rather than just taking for ourselves. Quite simply, “Avatar” deserves to be on top of the box-office list, and I think we all hope the sequel, “Avatar: The Way of Water,” will be able to bring more people back to the cinemas this December.