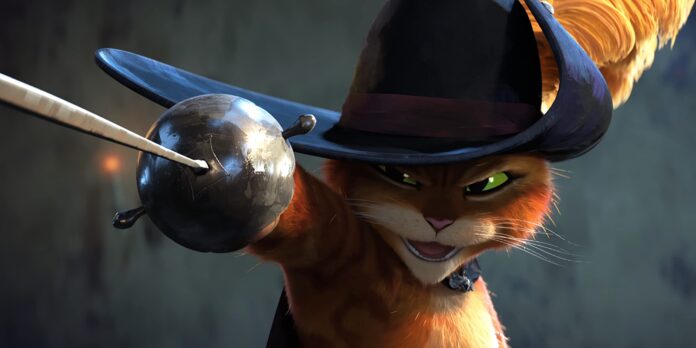 THE STORY – Puss in Boots discovers that his passion for adventure has taken its toll: he has burnt through eight of his nine lives. Puss sets out on an epic journey to find the mythical Last Wish and restore his nine lives.

The “Shrek” franchise, Dreamworks’ most famous and beloved series of films, has been dormant for a surprisingly long time as far as Hollywood is concerned. The first film debuted in 2001, leading to three direct sequels, ending with “Shrek Forever After” in 2010. The spin-off “Puss In Boots” followed in 2011, scoring an Academy Award nomination for Best Animated Feature. Naturally, Dreamworks wasn’t going to leave money on the table forever, and a sequel would eventually be released. Eleven years after the first installment, “Puss in Boots: The Last Wish” returns to the storybook world of fairy tales yet again with the returning voice talents of Antonio Banderas and Salma Hayek Pinault. This could’ve easily been a phoned-in, by-the-numbers reboot to the series to make the studio some cash. Thankfully, “Puss In Boots: The Last Wish” is just as fresh as the original spin-off, exciting from beginning to end, and one of the best animated films of 2022.

Our legendary feline hero, Puss in Boots (Antonio Banderas), hasn’t slowed down since we last saw him, but death is just around the corner at every turn. All these years later, he’s still fearless and mischievous (and cocky) as ever, heading into a new village to save them from a giant rock monster. Without skipping a beat, Puss wields his tiny sword, swigging pints of milk while taking down the creature. He succeeds but is crushed by a falling church bell at the last second. After Puss wakes up, he discovers that he’s used up eight of his nine lives. One more misstep, and it’s game over for our favorite feline. When the Big Bad Wolf (Wagner Moura), a mystical bounty hunter and the personification of death, comes to kill him, Puss faces the reality of his mortality. He’s filled with terror and goes into hiding, determined to survive, even if his life wastes away.

These introductory story beats are surprisingly mature for the sixth entry in a 21-year-old franchise targeted at children, but they land remarkably well and help give “The Last Wish” high stakes. Thanks to solid writing, the themes of death, impermanence, and living a consequential life pair so naturally with the character of Puss that it never feels forced or at odds with the character’s trajectory. The story takes some surprisingly emotional turns as Puss confronts how he’s lived his life up until this point and how he’s treated others along the way. Still, he isn’t giving up on his lives that easily. He finds himself in a race to find the mythical last wish; a crashed shooting star that holds valuable power to grant its owner any wish they desire. He teams up with his former paramour Kitty Softpaws (Salma Hayek Pinault), newfound friend, and wannabe therapy dog nuisance Perro (Harvey Guillén), so he can wish for all nine lives back. They must beat Goldilocks (Florence Pugh) and her three bears (Olivia Colman, Ray Winstone, and Samson Kayo, all sporting cockney accents) and the creepy Big Jack Horner (John Mulaney), who all want the wish for themselves. The voice work is hilarious and charming across the board, especially from Guillén, who gets some excellent moments for Perro to shine in a comedic and heartwarming role as he’s searching for companionship from the one character who has trouble putting anyone before himself.

Stunning animation pairs perfectly with the fairy tale world established in the first film, but even more so than the franchise’s previous installments. Building on styles utilized in “Spider-Man: Into The Spider-Verse” and “Klaus,” “Puss In Boots: The Last Wish” features CGI animation with gorgeous 2D textures, giving the world a painted-on effect that runs at a different framerate during the action sequences. It truly feels like a storybook that’s come to life, providing an extra rush of excitement that immerses the viewer into Puss’s new adventure. Director Joel Crawford fills the film with exhilarating and visceral action sequences that help to amplify Puss’s fears of death both in its literal and figurative forms. It’s a significant step up for Dreamworks, who already had another stylized hit earlier this year with “The Bad Guys” but really outdo themselves to prove once again they’re one of the finest animation studios out there.

Puss’s desperate journey to restore his lives puts him on a collision course with the Wolf, who wants to end him once and for all. Looking back on his life, Puss reflects on how he’s lived, who he’s loved, and what he’s taken for granted. This throughline is surprisingly resonant and ties in flawlessly with the other characters searching for the wish that by the time we get to the end, there’s a high degree of emotional investment in who will ultimately walk away with their wish granted. From beginning to end, “Puss In Boots: The Last Wish” continues to surprise, entertain and enthrall. It’s often hilarious, thematically layered, and compelling. Though the animation is extraordinary, the powerfully mature themes make this long overdue sequel unforgettable and worth the wait.