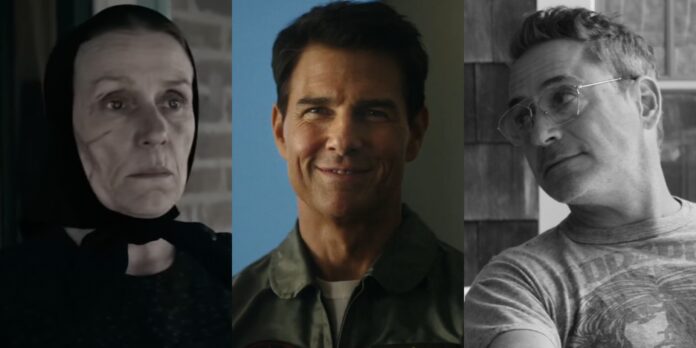 Every so often, you’ll be scrolling through someone’s IMDB profile and see something like “Oh, Owen Wilson is an Oscar nominee? I don’t remember that,” and then click on it and discover that yes, Owen Wilson was nominated for an Oscar, not for acting, but for co-writing “The Royal Tenenbaums.” See also Oscar nominee Lars Von Trier, courtesy of an Original song he penned for “Dancer in the Dark,” Oscar nominees Sean Astin, Jeff Goldblum, and Peter Capaldi for the short films they directed, and Oscar nominee Danny DeVito for producing “Erin Brockovich.” Most recently, Riz Ahmed became “Oscar Winner Riz Ahmed” for his live-action short “The Long Goodbye.” Actors and directors are nominated for Oscars all the time for categories you don’t associate them with. Those additional nominations in categories like Best Picture and Best Adapted, or Original Screenplay is how Bradley Cooper went from “that guy from “The Hangover” movies” to a 9-time Oscar nominee in less than a decade.

This year, we’re looking at a slew of potential new additions to the club of “people who have Oscar nominations for categories you don’t associate them with.”

Darren Aronofsky – Best Documentary (“The Territory”)
Aronofsky has already been nominated for an Oscar once for Best Director for “Black Swan.” At the time, he had generally not branched into hands-on producing yet (although he did produce “The Wrestler.”) As such, although “Black Swan” was nominated for Best Picture, Aronofsky was not nominated as part of that ticket. Since then, Aronofsky has taken on a more active producer role. He received a producer credit for his 2014 film, “Noah,” as well as for films he did not direct, like 2016’s “Jackie” and this year’s “The Good Nurse.” He might end up with a second (or even third) nomination for producing and directing “The Whale” this year. However, he has not limited himself to producing narrative features. He also has become involved in the documentary world. Since it screened at Sundance, the Amazon rainforest documentary “The Territory” has looked like a major contender in the Best Documentary Feature category. As one of its producers, if “The Territory” is nominated for Best Documentary Feature, Aronofsky will be nominated as part of that ticket.

Maria Bello – Best Original Screenplay (“The Woman King”) & Viola Davis – Best Picture (“The Woman King”)
Maria Bello has never been nominated for an Oscar to date, though she may have come close for her performance in “A History of Violence.” Where she has never been even close to a contender, she was in Oscar races for writing. In fact, until 2022, she had a single writing credit to her name. However, she received a “story by” credit for “The Woman King,” which is sufficient under Academy rules to ensure that if the film is nominated for Best Original Screenplay, Bello will receive a nomination alongside screenwriter Dana Stevens. Bello also produced “The Woman King” but did not receive the PGA mark (unlike her fellow producer Viola Davis). Thus, she will not be included as a nominee if the film is nominated for Best Picture. Under Academy rules, generally, a producer who does not qualify for the Producers Guild’s PGA mark will not be eligible for an Oscar Nomination for Best Picture. It is the same reason that the Russo Brothers will likely not be nominated as producers if “Everything Everywhere All At Once” is nominated for Best Picture. On the other hand, Viola Davis has already won one Oscar for acting and has more than a few nominations for acting to her name. However, she only recently branched into producing, receiving her first full producer credit on 2019’s “Troop Zero.” As a producer who received the PGA mark for “The Woman King,” under the Academy’s rules, she will receive an Oscar nomination alongside the film if it is nominated for Best Picture.

Ryan Coogler – Best Original Song (“Black Panther: Wakanda Forever”)
As the director of “Black Panther,” a Best Picture nominated film that won three Oscars, it is crazy to think that Ryan Coogler was not nominated anywhere for his work on the film. However, the film was not nominated for Best Director or Best Adapted Screenplay, and only producer Kevin Feige was included on the Best Picture nomination ticket. Fortunately, Coogler has been nominated for an Oscar since then. He received one as a producer of “Judas and the Black Messiah.” Now, this year, the acclaimed screenwriter/director may land his second nomination, once again for neither screenwriting nor directing. He co-wrote the film’s big Rihanna ballad, “Lift Me Up,” alongside Rihanna, Tems, and composer Ludwig Goransson. Coogler would face an uphill battle getting nominated for Best Adapted Screenplay or Best Director for “Wakanda Forever,” but the song seems like a surefire second nomination for him.

Robert Downey Jr. – Best Documentary (“Sr.”)
Although we’re still waiting to see Robert Downey Jr. return to more awards-friendly acting roles post-Marvel, he might go ahead and secure his third Oscar nomination before we see him onscreen in one of those such parts. Netflix’s “Sr.” documentary, focusing on Downey Jr.’s complicated relationship with his father, has been a hit on the festival circuit. It remains to be seen if it can secure enough attention to be nominated in a strong Best Documentary Feature Oscar field, especially when Netflix has an even stronger contender in “Descendant.” But as one of the film’s producers, if “Sr.” snags a nomination, Downey Jr. will come along for the ride.

Frances McDormand – Best Picture (“Women Talking”)
Given that Frances McDormand has already won an Oscar for Producing a Best Picture winner (“Nomadland“), it might be a stretch to say she isn’t associated with winning or being nominated for Best Picture Oscars. Still, it is notable that even when UA has chosen not to even campaign McDormand for an acting Oscar for her role in “Women Talking” (she is not listed on the film’s FYC site, unlike most of the film’s cast), she will still almost certainly be nominated as one of the film’s producers when the film is nominated for Best picture.

Taylor Swift – Best Live Action Short (“All Too Well”)
Taylor Swift has yet to receive an Oscar Nomination for Best Original Song, despite having composed several successful original ballads for films like “The Hunger Games” and “Fifty Shades of Grey.” Although she is in the Oscar race for Original Song this year for a tune, she wrote for “Where The Crawdads Sing,” it is unclear if she will be nominated there. Instead, she may have a greater chance in Live Action Short for her music video/short film “All Too Well” is eligible. Whether or not the short branch will embrace Swift come nomination time remains to be seen. However, given the musician’s star power and recent high profile with a new album release, it is certainly possible.

Do you think any of these mentioned contenders will become Oscar nominees on January 24th, 2023? Please let us know your thoughts in the comments section below or on our Twitter account and be sure to check out our latest Oscar predictions here.