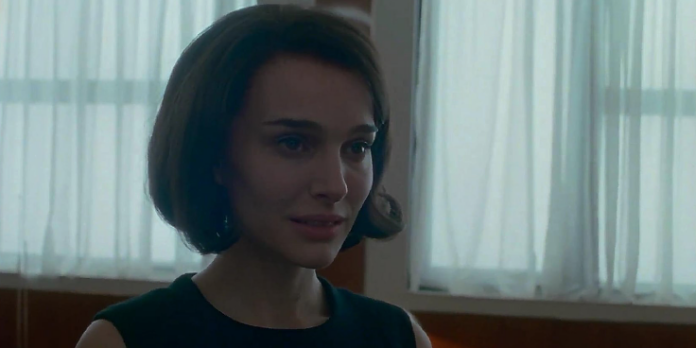 THE STORY – A searing and intimate portrait of one of the most important and tragic moments in American history, seen through the eyes of the iconic First Lady, then Jacqueline Bouvier Kennedy (Natalie Portman). Known for her extraordinary dignity and poise, here we see a psychological portrait of the First Lady as she struggles to maintain her husband’s legacy and the world of “Camelot” that they created and loved so well.

“Jackie” is an emotionally charged piece of work from Chilean director Pablo Larrain which will factor into this year’s Oscar season in many different categories. Beyond that, the film will stand the test of time due to the unforgettable work from not just Larrain but also the film’s star Natalie Portman as the former first lady Jackie Kennedy. “Jackie” is not just a startling work of art that functions as a biopic but it also acts as another means to preserve the legacy of President John F. Kennedy, something that his wife is very determined to do in “Jackie.” By being steadfast in the aftermath of the traumatic assassination, Jackie Kennedy emerges as a fascinating figure who stands strong on the outside but was screaming on the inside.

This remarkable film starts with its well-constructed screenplay by writer Noah Oppenheim which tells the story of Jackie Kennedy (Natalie Portman) through three different timelines. The first timeline chronicles the direct aftermath of President John F. Kennedy’s assassination, the funeral arrangements and the procession which took place a few days later, all led by his wife Jackie. The second timeline follows some time after the assassination where Jackie is being interviewed by a reporter (Billy Crudup) in her original home of Massachusetts. The final timeline follows Jackie as she takes the television cameras through a tour of the White House.

Natalie Portman has given us some terrific performances over the years, most notably her dedicated work in Darren Aronofsky’s (Who is a credited producer on “Jackie”) “Black Swan” which earned her an Academy Award for Best Actress. She manages to top all of her previous work with a performance that feels completely lived in and truthful down to the last drop of emotion that she has left to give in her body. She makes you feel Jackie’s shock, grief, anger and perseverance in every frame of film. While this is her show, Peter Sarsgaard is wonderfully cast as Robert Kennedy, who stands beside Jackie through this incredibly difficult time for their family as they are forced to bury the former President, transition power over to the Johnson’s and relocate themselves and their family out of the White House. All of this is happening under heavy scrutiny from those within Washington and the media. Both actors take us through that journey and dig way down deep to give strong performances.

This is Pablo Larrain’s first film in the English language and he does not disappoint in making the transition. The artfulness with which he brings to “Jackie” is evident in every frame as the period is meticulously recreated, from the cinematography shot completely on film to match the time period by Stephane Fontaine, to the costumes, sound work, and art direction. Every area of the filmmaking process is firing on all cylinders within “Jackie” but it is composer Mica Levi (“Under The Skin”) who stands out the most. Instead of going with a traditional score, her work here settles for something that seems like it was directly ripped from “There Will Be Blood.” The score makes you feel on edge for its unconventional approach yet highlights the grandiose quality of the legacy with which Jackie was looking to preserve when she laid her husband to rest.

“Jackie” is a reflective film that brings to light one of the most fascinating grieving processes of a public figure in history. For a person who was very transparent with the public and as such, adored by the public, the story of what she was really going through behind closed doors is all the more incredible due to the work Pablo Larrain brings to the film. From getting a career-best performance out of Natalie Portman, to weaving three different timelines together which tell a complete story without having to go through the conventional biopic “greatest hits” route and successfully re-creating the time period through all of the tools within the filmmaker’s toolbox, Pablo Larrain’s “Jackie” is a singular triumph. Its legacy is as secured as John F. Kennedy’s was due to the work his wife put in to make sure we never forgot who her husband was. As a result, Pablo Larrain, Natalie Portman and everyone else associated with the making of this movie makes sure that we’ll never forget and gracefully honor the legacy of Jackie Kennedy.