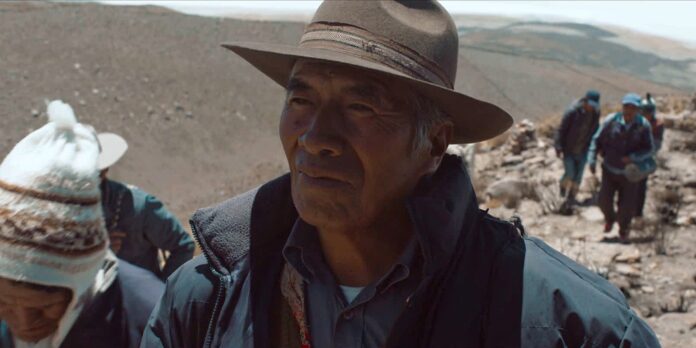 THE STORY – An elderly Quechua couple live a tranquil life in the arid Bolivian highlands. While Virginio takes their small herd of llamas out to graze, Sisa keeps house and walks for miles with other local women to fetch precious water. When an uncommonly long drought threatens everything they know, they must decide whether to stay and maintain their traditional way of life or admit defeat and move in with family members in the city.

Director Alejandro Loayza Grisi is, in addition to being a burgeoning filmmaker and a photographer, which will not be surprising for anyone to hear after watching “Utama,” his confident debut feature film. Under his vision, the camera lovingly captures the beautifully bare Bolivian highlands. And while the cinematography is undoubtedly the film’s highlight, it also contains a powerful story of a family facing the world-shifting effects of climate change on a personal level.

Virginio (José Calcina) and Sisa (Luisa Quispe) are an elderly Quechua couple who’ve carved out a routine life for themselves over many years. Their daily tasks are clear: Sisa walks to retrieve water while Virginio tends to their herd of llamas. However, after a long period without rain, the couple must face a difficult choice: whether or not to leave their rural dwelling for a different life amongst family members in the city.

Within the first few seconds that they’re on screen, it’s immediately apparent what kind of relationship Virginio and Sisa have. They clearly are used to their daily tasks and unchanging lives and have firmly settled into them. This quick characterization is thanks to Calcina and Quispe’s grounded, natural performances. Not only are they assured in their individual portrayals, but they also convey the apparent decades they’ve spent together as a couple by way of glances, quick snippets of efficient dialogue, and their physical relationship with each other. What the screenplay lacks in terms of character specificity, the two actors make up for with their completely lived-in portrayals. Calcina, in particular, turns in a stunning performance. He makes clear the weight of time and tradition that yokes Virginio, which is essential in making the audience sympathetic to his steadfast refusal to uproot himself and his wife. He also must portray the increasingly obvious symptoms of sickness that threaten Virginio’s health and does so with frightening realism.

Although Grisi has experience as a still photographer and cinematographer, he isn’t the director of photography for “Utama.” That would be Barbara Alvarez, who wonderfully captures both the Bolivian terrain and the faces of its inhabitants with equal attention. The dichotomy of sweeping landscape shots with intensely personal close-ups of the actors subtly shows how important humans are to preserving the environment and vice versa. The camera work also makes clear how difficult it would be to leave such a beautiful place, drawing further empathy from the audience to the plight of the film’s characters.

While the performances and cinematography create a moving tale of resilience, the sparse narrative and slow pace sometimes make the film a bit impenetrable. However, for the patient viewer, “Utama” is a quietly chilling look into the necessity of harmony between humans and nature.