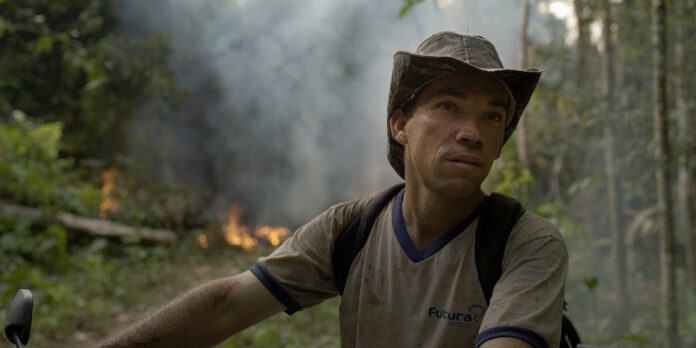 THE STORY – When a network of Brazilian farmers seizes a protected area of the Amazon rainforest, a young Indigenous leader and his mentor must fight back in defense of the land and an uncontacted group living deep within the forest.

​​​The widening deforestation of the Amazon jungle is one of those frightening crises that is known to us all but one which, despite its dire consequences to the fate of our planet, has always seemed a bit abstract as well. That may be partly because it is happening thousands of miles away, but also how the crisis is being reported as a thing that’s being destroyed, not a person. With his latest immersive documentary, “The Territory,” filmmaker Alex Plitz sets out to passionately prove just how wrong that notion can be.

For three years, Plitz embedded himself with members of the Uru-Eu-Wau-Wau, whose territory is deep in the heart of the Brazilian rainforest. When the Brazilian government first made contact with the Uru-Eu-Wau-Wau in the 1980s, its population numbered in the thousands. Today they are comprised of less than 200 Indigenous people. And with right-wing Brazilian President Jair Bolsonaro boldly proclaiming to his followers that Indigenous people have no right to the land anywhere, and the Uru-Eu-Wau-Wau and their sacred territory have never before been so endangered.

That deadly threat is the source of enormous concern for Neidinha, a non-Indigenous environmentalist who has been working with the Uru-Eu-Wau-Wau for decades and whose constant care is for the their future, their homes, and, most importantly, the people themselves. With Plitz’s constant presence, we get to know several, among them Bitate, an 18-year-old who’s tentative but determined as he becomes the group’s new leader, and Ari, the group’s “forest protector,” riding his motorcycle on the edges of the group’s territory, ever on the lookout for any potential invaders who may try to broach their boundaries.

Even with this dire crisis, it speaks to Plitz’s essential fairness as a filmmaker that he doesn’t see everything in terms of black and white, which is all too often the case in advocacy docs. Those favoring deforestation to allow industrialization to grow are usually depicted abstractly (and not without reason) as heartless moneygrubbers. But while their actions may be evil, many of those supporting that side are not, as Plitz’s camera reveals. Sergio, for example, is a poor farmer who has always wanted his family to farm their own land, and, believing Bolsanaro, he argues that settling the land is his right, though he’s careful to stay within the law. Less legally concerned, however, is Martins, a young man who sees himself as a legitimate settler but doesn’t think twice about torching trees to clear the places where he wants to live. Plitz’s sympathies are clearly with the Uru-Eu-Wau-Wau, but he also allows us to see the issue from these other viewpoints.

Much of the honesty seen in the portrait of the dwellers that Plitz creates comes largely, I suspect, out of trust; being embedded for three years with these folks has generated a comfort level among his subjects that produces responses that are often surprising and revelatory. Most importantly, it puts a face to the crisis in the Amazon, and Plitz uses all of his skills as a filmmaker to make sure that happens.

Those skills extend to the talents behind the camera as well. I have to admit that I usually don’t take notice of the crafts in documentary films, but the work in “The Territory” is exceptional. Plitz shares his cinematography credit with the Tangãi Uru-Eu-Wau-Wau, who takes his camera everywhere with them allowing the viewer to experience the meaningful details of their everyday lives in the rainforest. Kudos too to the film’s crisp editing by Carlos Rojas Felice.

In addition, special attention must be paid to the extraordinary sound design from Rune Klausen and Peter Albrechtsen. The quality of the sound throughout “The Territory” is impressive, but to truly appreciate their achievement, just close your eyes during the opening five minutes of the film. Listen to the vast array of sounds coming from the insects and creatures in this jungle. There are more than trees that are being destroyed when the developers burn the jungle, and that ups the stakes exponentially. Klausen and Albrechtsen capture it all in one of the very best sound designs so far this year.

As you might expect, audiences are likely to be outraged at the sight of the needless destruction going on before the eyes of the entire world. But after seeing the film, your rage may be tempered with heartbreak as “The Territory” also captures the devastation that extends to the lives of the Uru-Eu-Wau-Wau people, who want only to be allowed to live their lives in peace. In a year that has already seen a number of great documentaries, “The Territory,” a humanistic doc in the very best sense of the term, stands near the very top.