“THE SCHOOL FOR GOOD AND EVIL” 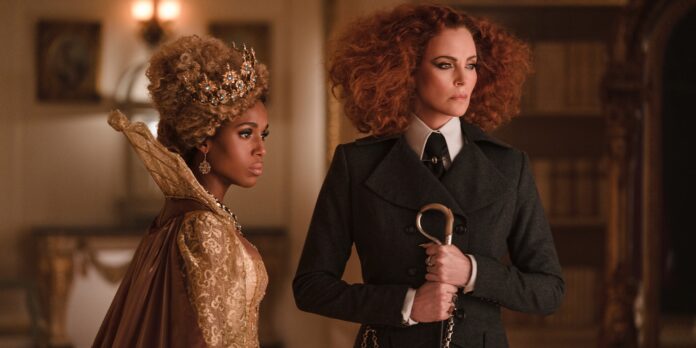 THE STORY – Best friends Sophie and Agatha find themselves on opposing sides of an epic battle when they’re swept away into an enchanted school where aspiring heroes and villains are trained to protect the balance between good and evil.

You don’t exactly start a movie with a title as generic as “The School For Good And Evil,” expecting much in the way of originality. Still, even by those low standards, Paul Feig and David Magee’s adaptation of Soman Chainani’s 2013 novel of the same name is staggeringly conventional and cliché, simply content to throw well-worn tropes from fellow YA fantasy films like “Harry Potter,” “Descendants,” “Maleficent,” and more into a blender and call it a day instead of actually attempting to innovate and show us a new spin on this familiar story that we haven’t seen before. No matter how much money you spend on your all-star cast (most of whom are wasted), your prodigious production design, or your extensive visual effects, if viewers can’t connect to the central story at hand, no amount of cinematic wizardry can draw them back in – especially when they’re being asked to commit to 147 minutes of stock characters serving as the pawns in a plot that will be brutally predictable to someone with even a cursory knowledge of any other YA fantasy film ever made.

This supernatural saga begins in the gray village of Gavaldon, where two misfits and best friends, Sophie (Sophia Anne Caruso, of “Beetlejuice: The Musical” fame) and Agatha (Sofia Wylie, the standout star of both Disney’s “High School Musical: The Musical: The Series” and this film), share a strong bond, despite having vastly different visions for their future. Sophie hopes to escape her humdrum life to become a princess, while Agatha – commonly called a “witch” in town due to her dreary aesthetic and aberrant mother – couldn’t care less about fairy tales and is solely focused on the here and now. However, one night under a blood-red moon, a mystical force sweeps them away to the titular School for Good and Evil, where, supposedly, “the true stories behind every great fairy tale begin.” But this adventure already gets off to a rocky start when the force somehow drops Sophie off in the School for Evil – run by the conniving Lady Lesso (Charlize Theron) – and Agatha in the School for Good – where she is doted on by the performatively pleasant Professor Dovey (Kerry Washington). In their classes, they come into contact with the offspring of famous fairy tale characters like the Wicked Witch, Captain Hook, and King Arthur. Still, their primary focus is to switch schools: a task that, according to the Schoolmaster (Laurence Fishburne), can only be accomplished by “true love’s kiss.” And with a dark wizard on the loose (Kit Young), that’ll be easier said than done.

To put it plainly, “The School For Good And Evil” is essentially just… exhausting. Rarely would you hear one say that a two-and-a-half-hour film had too fast of a pacing, but that’s just the case this time around. In adapting Soman Chainani’s novel, Paul Feig and David Magee seem to take everything from the 500-plus page book, constantly bombarding us with countless new characters and convoluted mythology to get from beat to beat without giving any single scene a moment to breathe. Not only does it become impossible to immerse ourselves in this world when it’s so speedily (and stereotypically) constructed, but it also results in the audience having next to no emotional investment. Sophie and Agatha’s friendship is too quickly established before they’re sent off to the School for Good and Evil and split up and later have evil forces come between them – with really not much additional exploration later on – that it’s hard to care for their greater conflict by the end because the stakes are only absent-mindedly addressed ahead of time in a few brief sentences about what they might mean to one another (which Wylie, to her credit, does manage to sell). Instead, the film wastes time on a trite love triangle involving these two and the school stud Tedros (Jamie Flatters), with both romances progressing at an unbelievably rapid rate, even for teenagers. And yet, the work done with Sophie and Agatha is still exponentially more effective than any other character arcs you’ll find elsewhere, with just about every supporting player falling victim to their short screen time.

Theron and Washington fare the best, given that they serve as the “faces” of the two titular schools, but even then, the performances from these widely acclaimed actresses feel frustratingly one-note (Theron can do this snarky bit in her sleep, while Washington is just asked to overact the whole time). And if you’re looking for something special from Fishburne, let’s just say you should lower your expectations, as he’s little more than an exposition machine. Oh yeah, and did I mention that Michelle Yeoh is also in this movie? Why hire one of the most versatile actresses of all time only to give her two scenes where she only delivers a few stale jokes? There’s simply too much going on here – with none of it being new – to justify “The School For Good And Evil’s” existence in the already colossally crowded YA fantasy subgenre or do right by its incredibly capable cast. Sure, the production design is indeed quite pretty (if familiar to fantasy fans, resembling a blend between “Harry Potter” and “The Nutcracker and the Four Realms“), and the costumes are very colorful, but something about the style all feels so hollow, especially as the film speeds towards a chaotic (and VFX heavy) conclusion that pits the schools against one another set to a “dark” remix of Britney Spears’s “Toxic.” Sadly, at the end of the day, “The School For Good And Evil” has nothing new to say (did we need this movie to tell us that people aren’t 100% good or 100% evil?), and when it’s capped off by a final twist that’s shamelessly stolen from one of the most famous Disney movies ever made, that sums up how behind the times this story truly is.

<b>THE GOOD - </b>Sofia Wylie is hands down the most engaging actor in the cast, rooting her character in reality and possessing genuinely compelling motivations. The production design is divine, as are the colorful costumes.<br><br> <b>THE BAD - </b>There's simply nothing surprising about this story whatsoever. You can predict every plot point after the first ten minutes, no twist is as thrilling as it thinks it is, and every character ends up exactly where you expect them to. It feels like an algorithm was filled with the tropes of every other YA fantasy film and asked to make a new one, and this was the result.<br><br> <b>THE OSCAR PROSPECTS - </b>None<br><br> <b>THE FINAL SCORE - </b>3/10<br><br>"THE SCHOOL FOR GOOD AND EVIL"