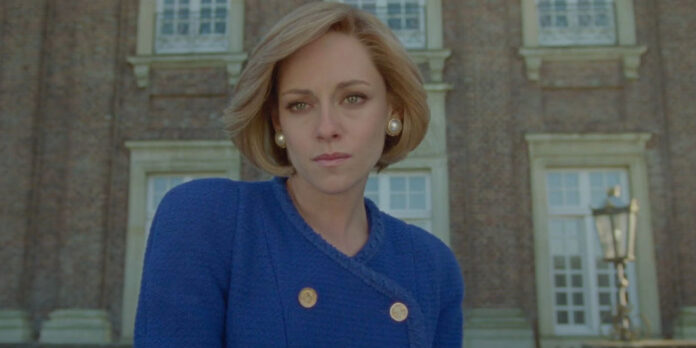 THE STORY – The marriage of Princess Diana and Prince Charles has long since grown cold. Though rumors of affairs and a divorce abound, peace is ordained for the Christmas festivities at the Queen’s Sandringham Estate. There’s eating and drinking, shooting and hunting. Diana knows the game. But this year, things will be a whole lot different. Spencer is an imagining of what might have happened during those few fateful days.
​
THE CAST – Kristen Stewart, Timothy Spall, Jack Farthing, Sean Harris & Sally Hawkins

​​​Diana Spencer, Princess of Wales, is lost. She grew up in Sandringham and has been to Sandringham House for Christmas with her husband, Prince Charles, and his family several times in the past. Nevertheless, when Diana decides to drive herself to the estate without any security or aides, she gets lost. It could be a symptom of her rash decision-making, further evidence of the crown’s position that she needs to be kept guarded and on a leash at all times. Or it could be an example of how incompatible Diana is with the royal family; as she tells her sons, “in this house, there is no future. The past and the present are the same thing,” and she is trying to look towards the future. A future where she can live her own life, not one dictated by an out-of-touch monarchy with a husband who is increasingly open about his affections for another woman, where she is not allowed to express her feelings for fear of reprisal. She must survive three days of the Christmas holiday with the royal family, in a house with no heat, where everyone is expected to put on weight to prove that they have enjoyed themselves. Three days of preselected outfits for every outing and meal, three days of stares from the family and staff, three days of being locked inside supposedly for her own protection from the paparazzi.

Kristen Stewart knows something about that last bit. Shot to superstardom at the age of 18 on the back of her role as Bella Swan in the “Twilight Saga,” Stewart was paraded in front of cameras for promotional events in an array of clothes selected for her, had her every move documented by paparazzi, and had to deal with the constant whispers of critics who said she couldn’t act. She certainly got her revenge, staking her claim as one of the boldest and fearless actresses of her generation with projects as diverse as the Joan Jett biopic “The Runaways” and the Kerouac adaptation “On The Road,” even winning a César award in France for her performance in Olivier Assayas’s “The Clouds of Sils Maria.” But her performance in Pablo Larraín’s “Spencer” is her crowning achievement, a daring fusion of herself and her star persona with Diana’s. While it is undoubtedly a savvy piece of casting, Stewart rewards that savviness with a performance for the ages, one that finds her using her natural discomfort around cameras to pierce through the vision of Diana in our collective consciousness to reveal the tortured soul underneath. The large emotional outbursts are powerful, but even more striking are the quiet moments in between, like when Stewart positively vibrates from all of the pent-up frustration that Diana hides just barely beneath the surface. She doesn’t so much mimic Diana as she does capture her essence and combine it with her own. It is thrilling to watch, both within the dramatic context of the film and in the meta-cinematic context of watching an actress ascend to a higher plane of performance.

Of course, part of the credit for this performance should go to director Pablo Larraín, who managed a similar trick with Natalie Portman in the 2016’s Jacqueline Kennedy biopic “Jackie.” While both films attempt to humanize one of the twentieth century’s most enduring cultural figures by dramatizing an emotionally fraught period of their life, in execution, the two films are actually quite different. “Jackie” doesn’t let its titular widow out of the mournful haze of tragedy, while “Spencer” seeks to free Diana from the nightmare of her life. At the beginning of the film, an on-screen text describes “Spencer” as “a fable from a true tragedy,” and Larraín takes Steven Knight’s delicately layered screenplay and runs with that idea, turning the cavernous hallways and austerely decadent drawing rooms of Sandringham into a pressure cooker. It is a house of horrors with a new trap for Diana seemingly around every corner. Even in the diffuse lighting of Claire Mathon’s otherworldly cinematography, you can feel the walls closing in on Diana, who only seems comfortable outside, where she can be free (although everyone inside the estate warns her of paparazzi in the area, we never see any outside of an official photo op outside a church on Christmas Day).

Yes, this is indeed the type of film in which a character will run outdoors to escape the oppression they feel inside. Knight’s attempts at psychoanalyzing Diana can often feel a bit obvious, but Larraín finds increasingly interesting ways of visualizing them. A visit to Diana’s childhood home, now boarded up and decaying, is a stunning sequence, delving into Diana’s memories and her fears for the future in ways that confound at first but reveal themselves upon reflection. What is most impressive is how Larraín locks us into Diana’s perspective throughout – Mathon’s camera probes uncomfortably close to her face in moments of stress and teeters at vertiginous angles when she approaches her breaking point. Jonny Greenwood’s score is constantly shape-shifting to match Diana’s mood, moving seamlessly from classical strings to jazz horns to mournful piano and back again.

The unfortunate downside of all this technical brilliance is that the film can feel over-intellectualized to the point that it keeps the audience at arm’s length, building up another wall between us and the film’s version of Diana just when you think it wants to tear down her walls and share her soul with us. But the film has a surprising ace up its sleeve in the relationship between Diana and her sons, William and Harry (Jack Nielen and Freddie Spry). Stewart builds a wholly believable warm rapport with the boys that ends up being the film’s true heart, exemplified by a soaring finale set to one of the best, most unexpected needle drops of the year. It doubles down on the story’s fable-like qualities by offering the ending we all wish upon someone in Diana’s situation, looking back at Christmas 1991 from the vantage point of 2021 and acknowledging our own complicity in her tragic story. It is a fable in every sense of the word – a story intended to show an important truth, with an element of the supernatural, that also happens to be a lie. But even if the end of “Spencer” is a falsehood, it enriches Diana’s story as well as our perception of her. “Spencer” finds its power in embracing the cinematic, even as it may push some away. Give yourself over to Larraín’s aesthetics and Stewart’s performance, and you will be rewarded with one of the richest cinematic experiences of the year.