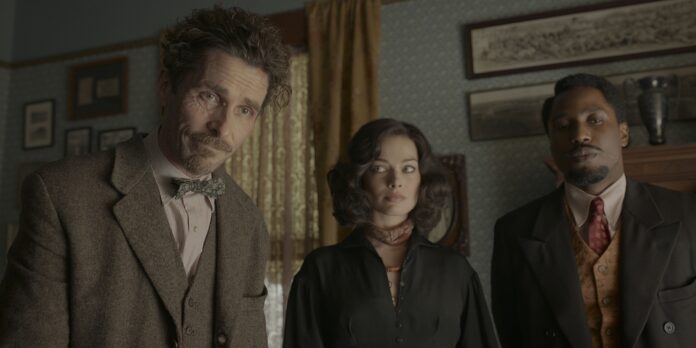 THE STORY – Set in the ’30s, it follows three friends who witness a murder, become suspects themselves, and uncover one of the most outrageous plots in American history.

What, oh what, to do with David O. Russell’s “Amsterdam?” The writer-director’s legendary run in the early 2010s earned him a permanent place in the upper echelons of Hollywood directors, or at least a strong enough place that a gigantic all-star cast was willing to risk working with a noted abuser and transphobe in today’s unforgiving cultural climate. For some, it makes sense: Russell directed Robert DeNiro to his first Oscar nomination in two decades in “Silver Linings Playbook,” and Christian Bale to an Oscar win in “The Fighter” and another nomination in “American Hustle.” He even managed to direct Jennifer Lawrence to three Oscar nominations (the first of which turned into a win), so it’s understandable why Margot Robbie would want to hitch her star to his as the female lead. But for the rest of this cast – which includes John David Washington, Rami Malek, Anya Taylor-Joy, Mike Myers, Andrea Riseborough, Chris Rock, Alessandro Nivola, Zoe Saldaña, Michael Shannon, Timothy Olyphant, and even Taylor Swift of all people – it’s a bit difficult to figure out why they would sign up for this “American Hustle” retread about a nurse, a lawyer, and a doctor getting caught up in a political conspiracy in between the first and second world wars. Perhaps they realized too late what they had gotten themselves into. The evidence is right there on the screen: Everyone involved is trying, but “Amsterdam” has none of the snap-crackle-pop of those films that came to define Russell as a director. The effortlessness is gone, replaced by an effortful straining that ruins whatever screwball zaniness is in the script.

The story – far more convoluted than it needs to be – revolves around a case of mistaken identity. Doctor Burt Berendsen (Bale) is called by his lawyer friend Harold Woodman (Washington) to do an autopsy on the body of their former commander from the war, at the request of his daughter (Swift), who believes he was murdered. But before they can report back to her, a terrible crime occurs, and the perpetrator fingers Burt and Harold. The two old friends are now in a race against time to clear their names, a race that will unexpectedly put them back in contact with Valerie Voze (Robbie), a nurse who tended to them during the war and later brought them to a hideaway of hers in Amsterdam, where they led an idyllic bohemian life together until Burt felt compelled to go back home to his wife (Riseborough). The three old friends pick right up where they left off and work together to solve the mystery and put the people behind Meekins’s murder away for good.

As is Russell’s way, this story is not told in a straightforward fashion. The film begins in 1933 before an extended flashback sequence tells us the background of our three main characters, and it continues to play fast and loose with linear storytelling for its entire runtime. This could be fun, a zany mystery with elements of screwball comedy, but instead, it feels exhausting. There are a lot of characters to keep track of and many important elements that do not make any sense until much later in the film. It’s also not helped by the performances. Bale is in a world of his own, doing one of his big quirky characters: Burt is all messy hair, glass eye, hunched back, and odd accent. Washington and Robbie compensate for Bale’s scenery-chewing by underplaying, which serves neither of them well, although at least Robbie’s flair for physical comedy gets an opportunity to shine. As two intelligence officers from the UK and the US, Myers, and Shannon are the only ones who get the rat-a-tat rhythms and outsized personalities of classic screwball down pat. However, it’s Malek and Taylor-Joy who are best in show, as a wealthy husband and wife who get high off eyedrops of painkillers.

The performances are not the biggest problem with the film, but they are indicative of the film’s biggest problem: “Amsterdam” involves a lot of talented people doing what they do best but merely going through the motions. Nothing feels particularly inspired, exciting, or even all that fresh. In his best films, Russell took many disparate styles and made them sing together in the way of the best jazz musicians. Think of the way Bale’s livewire energy in “The Fighter” brought the best out of the stodgy Mark Wahlberg, or the way the scene crackles with energy when Jennifer Lawrence goes toe-to-toe with Robert DeNiro in “Silver Linings Playbook,” the rookie besting the old pro at his own game. But nothing in “Amsterdam” really sings. Individual line readings of the screenplay’s few good jokes elicit laughs here and there, but the energy of the group scenes never really sparks in the way that made Russell’s previous films so energizing to watch.

This extends to the crafts. Emmanuel Lubezki’s cinematography feels shockingly anonymous and does not match well with O. Russell’s previously established filmmaking style. Daniel Pemberton’s score does its best to bring some zest to the proceedings but fails. The production and costume design are of high quality but don’t do enough to distinguish themselves. Even the editing, by Russell’s go-to guy since “Silver Linings Playbook,” Jay Cassidy, feels flat-footed. “Amsterdam” has all the ingredients that have made Russell’s past films so good, but something in the recipe is off this time. Instead of something bursting with flavor, he’s made a film that feels bland. It’s not bad, exactly, but it’s a waste of talent on all fronts.

Powered by JustWatch
Share
Facebook
Twitter
Copy URL
Previous article
The Next Best Picture Podcast: Episode 313 – NYFF60 Begins With “White Noise,” “Till” & The “Bones And All” Trailer
Next article
How Danielle Deadwyler Can Become The Second Black Woman To Win The Oscar For Best Actress