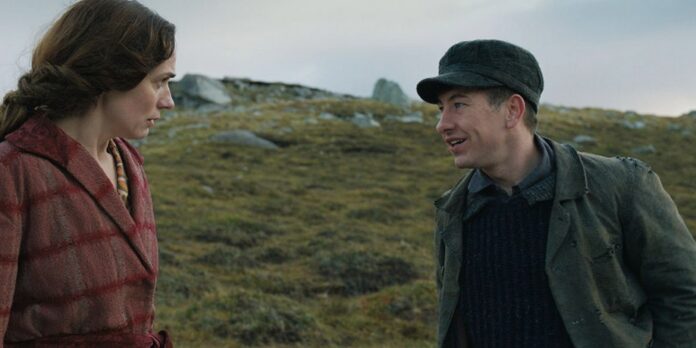 The current Oscar season narrative is that “Everything Everywhere All at Once” is poised to overtake “The Fabelmans” as the Best Picture frontrunner. But while pundits wonder if the former can indeed go all the way with industry voters or whether the latter can get bailed out enough by industry voters, “The Banshees of Inisherin” is almost sitting relatively quietly behind both – despite leading the Golden Globe nominations and having the most critics wins in several major categories so far. The path to victory for “The Banshees of Inisherin” is still the same as it’s been from the beginning – win in Best Original Screenplay for Martin McDonagh, and win at least one acting category, and it is right on the doorstep for Best Picture. Considering its string of early critic wins in Screenplay, that part of the equation is very possible. But if it prevails over “Everything Everywhere All at Once” in that likely dead-even showdown, that leaves the acting races as big question marks.

The odds are better than ever that “The Banshees of Inisherin” can get two Best Supporting Actor nominations for Brendan Gleeson and Barry Keoghan, just as McDonagh’s “Three Billboards Outside Ebbing, Missouri” did for Sam Rockwell and Woody Harrelson in 2017. Yet the odds of Gleeson or Keoghan doing what Rockwell did in 2017 get smaller with each Ke Huy Quan win and comeback story. While it’s certainly possible “Everything Everywhere All at Once” could peak far too early and weigh Quan down with it, it’s more likely that even if this happens, Quan would still be its best safety net for just one “collective” victory.

As such, “The Banshees of Inisherin” probably has to pin its acting hopes on either Colin Farrell or Kerry Condon. Some could insist that it can win for both, like “Everything Everywhere All at Once” is aiming to do with Quan and Michelle Yeoh. That may also be backed by early critic awards numbers, where both Farrell and Condon have the most wins in their respective categories. Yet while Quan is already pegged to sweep and Yeoh is in a 50-50 race with Cate Blanchett so far, Farrell and Condon are in far more fragile states of leadership. Therefore, Searchlight Pictures has to seriously consider which cast member it should put all its chips into, which tea leaves it should read into, and which direction each race is more likely to go into.

Right now, Farrell is a no-brainer choice, having stolen the thunder away from Brendan Fraser in critic awards so far and starring in what will easily be a top-3 contender for Best Picture. With Fraser no longer a secure frontrunner as “The Whale” receives more backlash, and with Farrell as the second biggest critic acting winner behind Quan and as a heavy favorite for Golden Globe Comedy Actor, everything would seem to point towards a Farrell sweep in Best Actor. At least until one remembers Austin Butler in “Elvis” and the Academy’s long history of musical biopic actor bias.

Butler hasn’t won much to date this season and probably won’t until the Globes, Critics Choice, SAG, and other industry voters weigh in. When they do, then no matter how many critic awards Farrell has and no matter where “The Banshees of Inisherin” stands in the Best Picture race, it stands to reason Farrell will be as massive an underdog as there can possibly be anyway. As ridiculous as that might sound at this moment, the tea leaves beyond current critic stats are undeniable. There is almost nothing in the Academy’s recent history to indicate they could vote against someone like Butler – except perhaps his uncommonly young age for a potential Best Actor winner. Joaquin Phoenix did lose for “Walk the Line” in 2005, yet Reese Witherspoon already had an acting win as a musical icon for that movie covered. Leaving that aside, if the Academy could choose musical lead acting winners like Witherspoon, Rami Malek for “Bohemian Rhapsody,” Renee Zellweger in “Judy,” Jamie Foxx in “Ray,” Marion Cotillard in “La Vie en Rose,” and to an extent Jessica Chastain in “The Eyes of Tammy Faye,” Jeff Bridges in “Crazy Heart” and Emma Stone in “La La Land,” then very little suggests they wouldn’t check Butler off either.

This is especially apparent with the rise of “Elvis” beyond Butler, as it further secures itself as a Best Picture nominee and pushes Baz Luhrmann as a possible Best Director nominee. If “Elvis” is big enough to do that much on nomination morning, it gets harder to imagine Butler has any chance of losing the industry’s final vote. In that context, unless “The Banshees of Inisherin” truly steamrolls into the Best Picture lead, and unless Farrell has a massive surge of industry goodwill, Searchlight will make a big mistake putting all its focus into a Farrell campaign. Considering that Searchlight is the most decorated Oscar-winning studio of this era, it knows enough about how these things work to see this coming – especially after it pushed Chastain to victory with this formula last season. By that measure, Searchlight would do better to take some eyes off Farrell and put far more focus into pushing Condon. Even so, that move has its risks as well.

Condon has won far less than Farrell thus far, yet that is because Best Supporting Actress is far more of a massive, wide-open mess thus far. In a category where Claire Foy, Jesse Buckley, and Carey Mulligan have not panned out as potential favorites to this point, and where Michelle Williams’ move into Best Actress left a massive hole that still hasn’t been filled yet, Best Supporting Actress is the only acting category left without a clear leader or two. While Quan has already lapped Gleeson and Keoghan, and Farrell is a real longshot not to be caught by Butler, Condon has a far more open window of opportunity to take advantage of. In fact, if she can win the Golden Globe, that may be the opening salvo for her to establish some order and steamroll from there. And if she does that, a Screenplay win would give “The Banshees of Inisherin” the Acting/Screenplay combination it needs to possibly seize Best Picture momentum. In that context, Searchlight would have genius foresight to push Condon over the top in such a wide-open category, focus on holding “Everything Everywhere All at Once” off in Screenplay, and use its usual Oscar season magic to win it all from there. But even such a perfect-sounding formula is far from foolproof.

Condon may have benefited so far from Williams leaving Supporting Actress, Foy and Buckley splitting the “Women Talking” vote and Mulligan not being boosted enough by “She Said” yet. But Jamie Lee Curtis and Angela Bassett have surged into contention amidst the chaos. Although Curtis has already gotten online backlash for supplanting Stephanie Hsu as “Everything Everywhere All at Once’s” biggest Supporting Actress contender, there’s still doubt that Bassett could be the MCU’s first-ever Oscar acting nominee for “Black Panther: Wakanda Forever,” they have as much of a chance to seize momentum at the Globes as Condon does. As overdue beloved veterans, Curtis or Bassett would be the starry, headline-making winners the Globes usually go for. Then if either of them can ride that momentum to a nomination and then win at SAG, the race could be over by default right after their SAG victory speech brings down the house. Yet on the flip side, if the far lesser-known Condon could beat both Bassett and Curtis at the Globes, that alone would be a significant sign of potential industry dominance ahead.

“The Banshees of Inisherin” needs Condon to show that dominance to stay on track for Best Picture, or barring that, it needs Farrell to defy recent Oscar history. But it is just as realistic that none of them can do this and that Best Original Screenplay is the only win it winds up with on Oscar night. Or maybe Condon will be the sole winner for her film instead like the last eight Best Supporting Actress winners have been. Perhaps it makes more sense if it only wins Screenplay, given that McDonagh’s “Three Billboards Outside Ebbing, Missouri” won two acting Oscars in 2017 but lost Best Picture because it couldn’t also win Screenplay. So now, this time, McDonagh may win Screenplay instead, yet fall short of Best Picture because none of his actors win. Though in that scenario, maybe “Everything Everywhere All at Once” will be the film that wins two acting Oscars but still loses Best Picture because McDonagh beat it for Screenplay.

If only because of Searchlight’s expertise, it’s hard to imagine “The Banshees of Inisherin” won’t win at least one major Oscar. Yet if it could just win a second, it’s hard to imagine it wouldn’t go all the way to Best Picture from there. But if it does take Screenplay, then everything hinges on whether Farrell or Condon can secure that second big win – and that may be the big question whose answer decides this entire race.

How many Oscars do you think “The Banshees of Inisherin” will win? Do you think it will win Best Picture? Please let us know in the comments section below or on our Twitter account. You can see the Next Best Picture team’s latest Oscar predictions here.