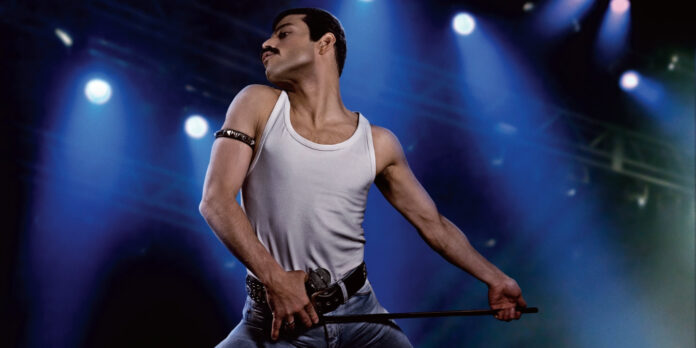 THE STORY – A biographical look at the rock group Queen, with particular emphasis on lead singer Freddie Mercury, as he joins the group, helps to create Queen’s sound, deals with fame, explores his sexuality and contracts AIDS.

There was a particularly dopey movie genre that briefly flourished and (thankfully) died in the 1940s and 1950s that told the life stories of famous composers. There’s “Stars And Stripes Forever” with Clifton Webb as John Philip Sousa, a biopic that nobody was crying out to be made, “Rhapsody In Blue” in which George Gershwin (Robert Alda) indulged in fictional romances, and the lulu of them all, “Night And Day,” which tried to convince us that Cole Porter was straight. And then they go and cast Cary Grant in the role!?

Just when we thought we had said good riddance to this kind of film, the dopiness has suddenly risen from the grave with director Bryan Singer’s “Bohemian Rhapsody,” an anemic look at the creation of the rock group Queen with particular emphasis on its lead singer Freddie Mercury (Rami Malek). The film actually begins on a high note when the 20th Century-Fox fanfare is played on an electric guitar. The logo sequence was witty and well-done, and I thought, “That’s pretty clever.” However, that’s the last time I had that thought throughout the 2 1/4 hours that followed.

The story starts with Freddie preparing to go onstage at 1985’s Live Aid concert, which is then followed by a  flashback in time to when he was still a baggage handler at London’s Heathrow Airport. He’d work by day, then go to see bands at night, much to the chagrin of his Parsi family. Anyone who enjoyed how the John C. Reilly-starred “Walk Hard” and how it demolished the wooosh-back-in-time structural cliché will roll their eyes here as director Bryan Singer actually takes this dusty narrative device seriously.

From there, the story unfolds exactly the way you would expect. Freddie sets out to see a favorite band and goes backstage to ask them if they could use a new lead singer, and wouldn’t you just know it — their lead singer just quit about a minute before. What a coincidence! In what seems like five minutes, young Farrokh Bulsara renames himself Freddie Mercury, renames the band Queen and helps to procure representation by Elton John’s management. I guess success in the music industry came so quickly back then.

Much of the speculation about “Bohemian Rhapsody” was whether the film would try to de-gay Freddie’s sexuality, as “Night And Day” did for Cole Porter. True, much of the film’s early running time is devoted to Freddie’s courtship of Mary Austin (“Sing Street’s” Lucy Boynton) whom Freddie eventually married. Still, the film’s second half does focus on Freddie’s exploration of his sexuality, encouraged by his new sleazy personal manager Paul Prenter (Allen Leech), who serves as his occasional lover but who mostly brings home leather boys for Freddie’s pleasure– What sex there is in the film is limited to a few chaste kisses. It isn’t until the film’s conclusion that Freddie finally finds a potential partner (Aaron McCusker) who can offer him the feeling of family for which Freddie has been searching for throughout the entire movie.

In his review of the film this week on Uproxx, Mike Ryan offers a very important reminder that everything in the film had to be approved by the surviving members of Queen, and there may be some scores to settle. For example, after lead guitarist Brian May (Gwilym Lee) comes up with the “stomp stomp clap” that is the hook for “We Will Rock You,” Freddie shows up late and hung over. The same scenario happens when Freddie stumbles in after bass guitarist John Deacon (Joseph Mazzello) comes up with the hookable bass line for “Another One Bites the Dust.” So we learn that two of the most iconic Queen moments were devised by band members other than Freddie…maybe.

The band, which has broken up with the departure of Freddie for a solo career, reunites for the 1985 Live Aid charity concert. During rehearsals, Freddie tells the band members that he has contracted AIDS, which at that time was pretty much a death sentence, and the guys hug it out. In reality, Freddie wasn’t diagnosed until two years after the Live Aid concert, but at this point, who cares? The recreation of the set design for the Queen concert is impressive, but the thousands of computer-generated fans are not.

The only saving grace to this mess (and it is a major one) is the performance of Rami Malek as Freddie. Not only does he capture Freddie’s moves and onstage charisma dazzlingly, but Malek is also able to reveal the character’s joy at being able to become Freddie Mercury while implying that there’s a little bit of the fearful Farrokh Bulsara still there deep inside Freddie. Malek is electrifying in the role and would be a major Best Actor candidate were it not for the shambles of the film around him.

Granted the production was troubled from the beginning, as both Sacha Baron Cohen and Ben Whishaw were set to play Freddie, and director Bryan Singer was fired before completion of photography. Still, Queen was a group that broke down the rules for what a single or an album could be, and they deserved a movie that broke down the same barriers for movies, not this toothless wonder. This “Bohemian Rhapsody” is a Queen biography that only your grandmother could love.