“THE EYES OF TAMMY FAYE” 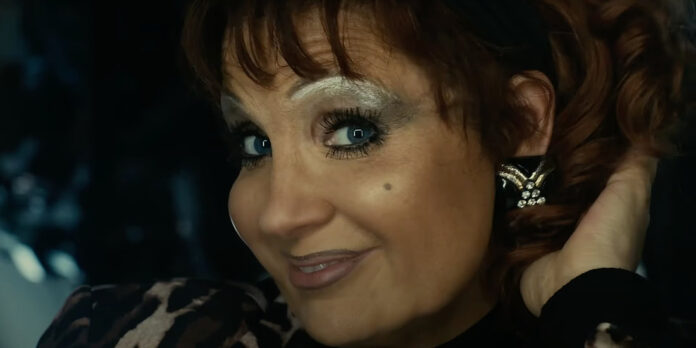 THE STORY – In the 1970s, Tammy Faye Bakker and her husband, Jim, rise from humble beginnings to create the world’s largest religious broadcasting network and theme park. Tammy Faye becomes legendary for her indelible eyelashes, her idiosyncratic singing, and her eagerness to embrace people from all walks of life. However, financial improprieties, scheming rivals, and a scandal soon threaten to topple their carefully constructed empire.

​​​At the height of her fame, Tammy Faye Bakker was many things to many people. For her faithful, she was a joyous entertainer and an inspirational role model for women of faith everywhere. However, to others, she was a sham, a mascaraed clown, and a national punch line. In Jessica Chastain’s hands, however, Tammy Faye becomes a woman of immense contradictions, eager to do anything to further her mission of spreading the word of God, even while turning a blind eye to the cash that keeps pouring in that furnished her lavish lifestyle.

Michael Showalter’s “The Eyes of Tammy Faye” chronicles the rise and fall of Jim and Tammy Faye Bakker, two small-time evangelists with big dreams. Most of the goals for Jim (Andrew Garfield) involve amassing enormous wealth and power, and for him, monetizing the gospels seems as good a way as any to get there. For Tammy Faye, however, her devotion to what she sees as her mission for Christ blinds her to the fact that she is merely a cog, though an important one, in the giant televangelical scam that ran rampant in the 1970s and ’80s (and continues to some degree to this day).

Using Tammy’s homemade puppets as an entry point to teaching the gospel to little children (who, Jim correctly surmises, will eventually bring along their monied parents), the young Bakkers’ fledgling ministry soon comes to the attention of televangelist Pat Robertson (Gabriel Olds) who offers them a children’s show on his low-rated network. The Bakkers’ brand of showbiz razzmatazz becomes an instant hit, so Robertson offers Jim a prime-time talk show, “The 700 Club,” which soon becomes the CBN Network’s flagship series. The Bakkers quickly jump ship to join the help found the Trinity Broadcasting Network and eventually go on to create their own broadcasting empire, the PTL Satellite Network, and that’s where the money really starts rolling in. And the trouble begins.

Unlike “Judy” or “Respect,” two other celebrity-driven biopics to which it has been compared, “The Eyes of Tammy Faye” is after something much more ambitious than a mere chronicle of the rise and fall and rise of its subjects’ careers. Here, we also have a fascinating reminder of the fraudulent financial schemes that became the backbone of televangelism, with the Bakkers at its center. It’s an ambitious approach, one that often doesn’t always pay off as well as it might. Where the unconventionality of its subject might have sparked an equally imaginative approach to the material (a la “I, Tonya“), screenwriter Abe Sylvia takes the overly-familiar “cradle-to-grave” take on the biopic, moving the narrative from event to event rather than allowing the story to be driven through the characters’ growth in experiencing them. So the narrative at times plods along, despite the dazzlingly tacky art direction by Laura Fox to keep you going. Also spot-on are the costumes by Mitchell Travers and the film’s all-important makeup and hairstyling, which sets the period mood to perfection.

Fortunately, Showalter has assembled a first-rate cast to fill in some of the blanks of the script. The consummate Cherry Jones suggests a deeper characterization of Tammy Faye’s conservative mother, Rachel LaValley. Still, she’s missing the one or two scenes that would have really let her stick the landing. Vincent D’Onofrio plays rival evangelist Jerry Falwell as a Scorsesean mob boss, which is a wise move and possibly not that far from the truth. His utter disrespect for the Bakkers is revealed in every glance, and his sheer disgust at Tammy Faye’s empathetic embrace of AIDS patients is absolutely squirm-inducing. Garfield, whose performance appeared a bit cartoony in the film’s trailer, really comes through with depth and feeling in the finished film, capturing the many conflicts roiling inside the televangelist. From his desire for wealth and power at any cost to ignoring his wife’s sexual needs thanks to his own conflicted sexuality, Bakker could be easily played as a straight-up villain, but Garfield smartly resists that approach, emphasizing instead the pain he feels at having to keep his increasingly weighty secrets from his investors and, more importantly, from Tammy Faye.

Chastain has a daunting high-wire act to pull off for her Tammy Faye to work — she must avoid the Tammy Faye caricature at all costs yet never over-correct so that the innate showmanship of the real woman is lost. To say that she carries it off is an understatement. Her performance here is a triumph. Ever since her big hat trick with “The Help,” “The Tree of Life” & “Zero Dark Thirty,” we (and probably she) have been waiting for that one great role that can allow her to display the many facets of her acting skills. Chastain has found that role here. Not only does she revealingly penetrate the woman behind the mascara, but she also allows us to see her growth, for better or worse, from adoring wife and mother to becoming her own woman. Plus, Chastain gets to sing, dance and cry…yes, there’s lots and lots of tears, but it’s always in the service of the character. Chastain’s work here is at once powerful and touching, and her performance as Tammy Faye is, I think, the very best of an already distinguished career.

There’s still one nagging question: Was Tammy Faye complicit in Jim’s crimes? The film is noticeably ambiguous on that subject, leaving it up to the viewer to decide. If you have a strong instinct one way or another, I’d say trust that instinct. (Having been alive to witness these incredible events unfold, I’d say she was less Mother Teresa and more Carmela Soprano, but that’s just me. Your mileage may vary). As the credits roll, you may be finding yourself thinking back to the film’s very first scene with Tammy Faye in front of a makeup mirror. With her permanent eyeliner and lipliner, Tammy looks into the camera and says, “This is who I am.” It’s sad, a little funny, and thanks to Jessica Chastain, it rings absolutely true.