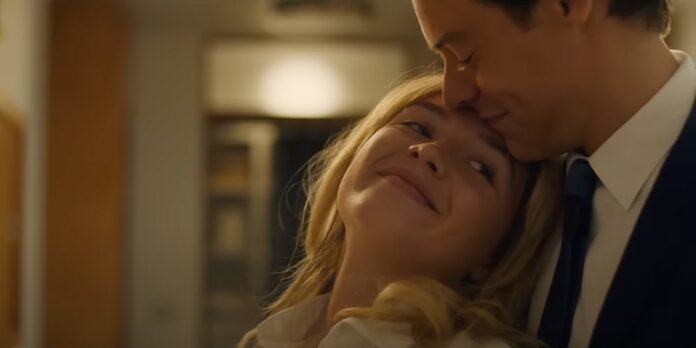 One of the year’s most controversy-ridden releases performed in line with box office expectations, while a re-release of a science fiction classic proved audiences are ready for a return to Pandora later this year; other new releases continued their impressive holds as the fall film festivals continue on.

Following a highly publicized clash between star Florence Pugh and director Olivia Wilde, “spit gate” and a slew of other internet rumblings, “Don’t Worry Darling” seemed unfazed by the negative publicity in its opening weekend at the box office. The sci-fi take on 1950’s conformist culture earned $19.2 million in its debut. An opening weekend in the $20 million range is nothing to scoff at. While the film did not reach the heights of $25-$30 million that some like myself expected, it still marks a solid victory for distributor Warner Brothers and those who are always looking for original mid-budget adult dramas to succeed.

Despite the star-studded cast, which includes Pugh, Wilde, Chris Pine, Gemma Chan, and pop star phenom Harry Styles, “Don’t Worry Darling” still posed an intriguing box office challenge. High-concept, R-rated features are not greenlit that often by an industry that covets known intellectual properties. The film also jumped an additional hurdle once the negative word of mouth started brewing out of its Venice Film Festival debut. “Don’t Worry Darling” is currently hovering around 35-40% on Rotten Tomatoes – a mark Wilde likely did not have in mind for the sophomore follow-up of her critical darling 2019’s “Booksmart.”

Through trials and tribulations, “Don’t Worry Darling” still scored positive results for a $35 million production. Warner Brothers were savvy in playing up the horror and intrigue of the film’s premise while fixating much of the marketing on the glamour of the film’s cast. It will be fascinating to see how “Don’t Worry Darling” performs in the future, considering the lackluster reviews and a so-so B- on CinemaScore. I could see a quick drop-off with the middling word-of-mouth and the likelihood that Styles’ fans showed up in a front-loaded fashion (the film scored nearly half its gross from its Thursday/Friday performance). Still, a final gross in the $45-$55 million range domestically/$70-$80 million worldwide seems like a reasonable result for Wilde’s much-discussed follow-up.

“The Woman King” firmly stood its ground in its second weekend, earning a strong $11.1 million gross in the number two spot. A slight 41% drop off from last weekend’s $19 million debut is a byproduct of the glowing word of mouth surrounding the film (it’s still hovering around 90% on Rotten Tomatoes), which has now translated into awards season buzz. Weekend two is usually when a movie will experience its most prominent drop-off while in wide release, so this prosperous second weekend bodes well for the female Black-led film going forward. Historical war epics like “The Woman King” are not the easiest sell in our contemporary marketplace. However, distributor Sony played their cards right by pushing the action angle alongside the sturdy presence of star Viola Davis. With $36.2 million domestically so far against a $50 million budget, “The Woman King” represents a much-needed win for old-school, adult-driven Hollywood fare. I still expect a final domestic total in the $75 million range, but we’ll see how far it can go.

“Don’t Worry Darling” and “The Woman King” also send a loud and clear message to studios that often push female-driven offerings to the backburner. For both films to succeed simultaneously at the box office, their performance should hopefully implore more studios to embrace female writers/directors and the inspired ideas they bring to the big screen.

In preparation for its much-anticipated sequel “The Way of Water,” “Avatar” (2009) discovered a welcoming audience in its theatrical return. The James Cameron blockbuster amassed $10 million domestically and $30.5 million in other parts of the world – with both totals adding to what is already the highest-grossing film of all time worldwide. This gross is the best performance for a re-release since “Jurassic Park” earned $18.6 million in its 3D rollout in 2013. Distributor Disney made an intelligent move to cash off the film’s status as a piece of evolutionary filmmaking while also building hype for the impending release of “The Way of Water” thirteen years after its predecessor. Some still consider “Avatar” to be wildly overrated. However, it’s clear the film still holds a captivating audience amidst the zeitgeist (as a 25-year-old, I think it’s the “Star Wars”-level event film of my generation). These results are a promising sign of the interest level in Cameron’s much-anticipated follow-up, which is widely expected to be 2022’s highest-grossing film.

Elsewhere, horror standouts continue to prosper. The critical-darling “Barbarian” earned $4.8 million in its third weekend – a mere 26% decline from last weekend’s gross. Distributor 20th Century Fox wisely expanded the title into an additional 550 theaters and prepared a hilarious new tie-in trailer to promote the film’s buzzy twists and turns. “Barbarian” has already earned $28.4 million domestically on a $4 million budget. The horror title should benefit enough from the glowing word of mouth to climb near the $40 million threshold.

A24’s horror prequel “Pearl” rounded out the top five with $1.9 million. The film’s 38% drop off from last weekend is actually a slight improvement from its predecessor “X” earlier this year (a 48% drop). A24’s prequel gamble is paying off nicely, with “Pearl” capturing 3/4ths of “X’s” audience despite a distinctly different tonal approach. “Pearl” is already considered a hit with $6.6 million domestically on a $1 million budget. Its success should set up nicely for Ti West’s third film in what is now considered a trilogy, “MaXXXine.”

Next weekend brings the release of the Paramount horror film “Smile” and Universal Studios’ landmark romantic comedy “Bros.” “Smile” continues to capture mainstream interest through its eerie marketing campaign and compelling premise. I think the horror title could capitalize with a $15-$19 million gross. Billy Eicher’s buzzy romantic comedy received very positive notices at TIFF and will be driven by the fact it’s the first all-gay cast for a major studio film. I expect a debut in the $11-$15 million range.

Here’s the rest of the Top 10 for this weekend…