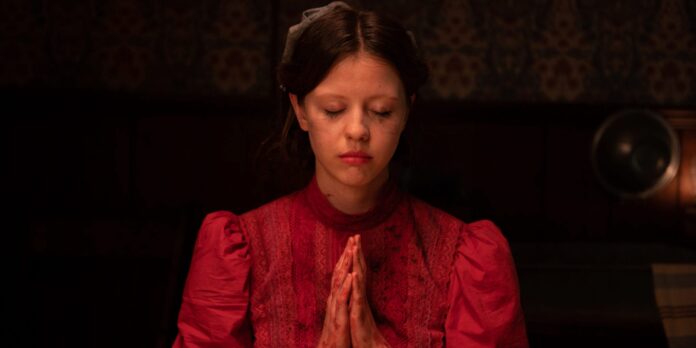 THE STORY – Set in 1918 during the era of the Spanish Flu pandemic and World War I, the film explores the origins of Pearl, the villainous character from X. The events take place prior to that previous film and explore how the cabin, where the “massacre of X” takes place, was once used as a boarding house during the war. Trapped on her family’s isolated farm, Pearl must tend to her ailing father under the bitter and overbearing watch of her devout mother. Lusting for a glamorous life like she’s seen in the movies, Pearl finds her ambitions, temptations, and repressions all colliding in this stunning, technicolor-inspired origin story of X’s iconic villain.

When “X” first premiered back in the spring of this year, one was treated to a thoroughly entertaining horror spectacle that even attempted to mine some emotional commentary on the state of art and sexuality. It was a well-done effort from all involved, particularly as it was able to showcase an engaging Mia Goth. Few people were aware that Goth actually played two roles. Not only did she portray the film’s heroine Maxine, but also the murderous elderly woman Pearl. After glimpsing a teaser following the closing credits, her origin story is given the feature-length prequel treatment. “Pearl” has both improvements and shortcomings from its predecessor, but it is another compelling spectacle of violence with an engrossing central performance.

The physical setting remains the same, except now the story takes place in 1918, and a young Pearl (Mia Goth) is the sole child taking on the farm’s responsibilities. As her husband is off fighting in the first World War, she is left to care for her infirmed father (Matthew Sunderland) under the strict guise of her harsh German mother (Tandi Wright). However, Pearl’s ambition for stardom leaves her gaze wandering, attracting the eye of the handsome local movie theater projectionist (David Corenswet), who encourages her ambition. However, the harsh realities of her life constantly threaten to undermine Pearl’s determination. With her eyes set on winning a local dance competition, every moment that thwarts her goal only sends her further into the darkness of her mind, leading her to be consumed by the distressing malice and fury.

Goth had already delivered an impressive turn in the first film, but she gives an even more captivating one here. While there is no such novelty of portraying dual roles this time, Goth’s abilities are still nothing less than extraordinary. She manages to convey every emotion one could imagine for this character: the earnest melancholy of an eager soul trapped by her surroundings, the frightened desperation to grab hold of any means of escape, and the struggle to tame the insidious nature that lurks within until it cannot be contained any longer. She turns this character inside out and particularly shines towards the end when the facades start to slip away. A powerful monologue becomes one of the greatest displays by any actor this year, full of heartbreak and rage that makes it completely gripping. Goth has already shown extraordinary talent, and this is yet another example of how mesmerizing she truly has become.

While she is by far the greatest aspect of the film, there are still impressive actors who make an impact. Wright’s coldness always feels calculated in an authentic way to the character, a foreigner trying to be careful of the potentially dangerous locale while also carrying her own disappointing burdens. She is arresting in the antagonistic moments shared with Pearl without ever feeling betrayed by caricature. Sunderland doesn’t contribute much due to the limited nature of the role, but there’s an endearing presence he still manages to capture. The same is said for Corenswet for having just the right amount of charm and sleaze that is never overplayed. The small ensemble is capable, but in truth, they all pale in comparison to the leading star.

Ti West returns as the director, and trading the grimy 1970s aesthetics for earlier 20th century America has its advantages and drawbacks. While the open scenery is still utilized, especially with some striking nighttime landscapes, the filmmaking feels more incongruous with this environment. The luscious score harkens back to old Hollywood, but too many anachronisms fracture that perspective. “X” was able to intertwine its subject matter and location in a way that was more convincingly linked than it is here. Still, West’s direction does have some stylish choices that are enticing, especially in the more fantastical ways in which Pearl’s haunting psyche is represented. This go-around may not feel quite as ecstatic to revel in the detailed world, but the endeavor is just as alluring.

West and Goth have added another collaboration credit, this time as the film’s writers. They infuse this screenplay with a focus on pursuing a character study instead of outlandish slaughter. In truth, the horror elements here come across as more subdued and are not as favored as the more foreboding atmosphere of dread that lingers in every scene. There is also an attempt to prod further thematically into this lonely woman, examining the repressed desires that can let such ambition fester to the point it becomes a twisted and mangled carcass. There is even a connection back to the first film in how the entertainment industry uses exploitation as a means to fulfill and destroy fantasies. It’s a more tenuous association but still a fascinating one to ponder. Even when faced with some deficiencies, credit is given to the film for finding intriguing avenues that provide greater depth to the subjects it explores.

“Pearl” does take a little while to settle in, admittedly. The scenery never quite meshes with the directorial choices, and that juxtaposition can be frustrating to endure. It sets an expectation for a shallow exploit that, fortunately, is mostly averted. What does unfold is a riveting character piece that dives deep within a traumatic perspective and illuminates the sad and maligned worldview that turns a person to such acts of cruelty. Even when this inspection falters, Mia Goth’s commanding performance is there to present a monumental demonstration of her incredible skills. The final results are a more discordant companion piece than one would expect, but plenty to appreciate for what it attempts to analyze.

<b>THE GOOD - </b>Mia Goth delivers an incredible performance in a role that offers layers of complexity and a fantastic showcase of her talent. The themes explored are compelling, focusing on an engaging character study with some impactful reveals. The supporting cast does a good job with their portrayals. Some of the stylish choices in the filmmaking are effective.<br><br> ​ <b>THE BAD - </b>Some of the directorial choices are at odds with the period setting, which causes a frustration in connecting with the overall narrative at the beginning of the film.<br><br> ​ <b>THE OSCAR PROSPECTS - </b>None<br><br> <b>THE FINAL SCORE - </b>8/10<br><br>"PEARL"