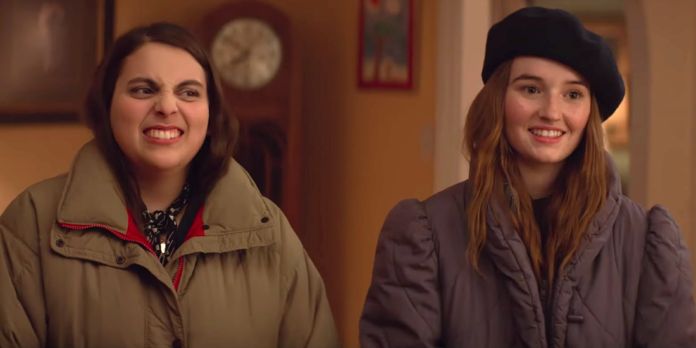 THE STORY – Academic overachievers Amy and Molly thought keeping their noses to the grindstone gave them a leg up on their high school peers. But on the eve of graduation, the best friends suddenly realize that they may have missed out on the special moments of their teenage years. Determined to make up for lost time, the girls decide to cram four years of not-to-be missed fun into one night — a chaotic adventure that no amount of book smarts could prepare them for.
​
THE CAST – Kaitlyn Dever, Beanie Feldstein, Jessica Williams, Lisa Kudrow, Will Forte & Jason Sudeikis

​​​​​The teen sex comedy has existed for more than half of the time cinema has. Every generation has its classics. “Animal House,” “American Pie,” “Porky’s,” “Superbad” etc. Some hold up to scrutiny better than others. Typically, they focus on innocent or “innocent” teens attempting to lose said innocence. They’re usually rowdy and crude, and there’s almost always some sort of message about friendship in there. And of course, without fail, these films are almost always written by, directed by and starring men.

So how does “Booksmart” tip this “been there, done that” narrative on its head? Two things: it is written by, directed by, and starring women and it leans away from the raunch and leans more in on the emotion. And not just in the “American Pie” kind of forced in, “oh we need some pathos” kind of way. No. This is deep and hard-earned emotion because the relationship at the film’s center is so well fleshed out, and the performances are so good. Don’t get me wrong, there are still masturbation and vomit gags to go around but there’s so much passion here, that the viewer ends up crying, not just from laughter, but also from earnest feelings.

“Booksmart” follows two teens who have spent high school eschewing any social interaction in favor of academia. It worked out well for them. Molly (Beanie Feldstein) is going to Yale. Amy (Kaitlyn Dever) is going to Columbia. But to their horror, they discover that their classmates who partied are also going to strong schools. In the ensuing existential crisis, Amy and Molly decide to cram four years worth of partying into the single night before graduation.

In any teen sex comedy, a lot of the success is going to rely on whether or not the cast members are up to the task. Beanie Feldstein had already showcased scene-stealing comedic chops in “Lady Bird.” Here, she really gets to show off the full range of what she is capable of. She nimbly navigates the tightrope between abrasive and charming, bringing us a person who it is patently obvious why she didn’t get along with most of her peers, but who also possesses a tremendous amount of decency and warmth beneath her antagonistic mannerisms. Her comedic line deliveries are spot-on. But when the film reaches its third act, we get to see a whole different style of acting: the deeply emotional side. The transition between styles works seamlessly, and in the process, Feldstein proves herself as both an adept comedic and dramatic actor.

Meanwhile, Kaitlyn Dever, who has already shown us glimpses of what she is capable of in films like “Short Term 12” delivers an arguably even stronger performance here, as the shy supporting friend who finally learns to speak for herself after lingering in her larger-than-life best friend’s shadow for so long. There is a scene during the third act that Olivia Wilde captures in a single take that allows Dever to straight up “go for it” emotionally. It is a stunning piece of acting and camerawork that helps elevate “Booksmart” beyond most of the other films of its ilk. The sheer range of quiet emotions she displays with her face, leading up to the explosion is beyond impressive. Both Feldstein and Dever deserve Golden Globe consideration. Feldstein has the showier part, but Dever deserves as much love, if not more.

The supporting cast is entertaining as well. This is very much the Feldstein and Dever show, but Jason Sudeikis has fun as a harried principal and offers one of the film’s biggest laugh out loud moments. Jessica Williams, as a teacher who isn’t sure she’s ready to leave her wild 20’s behind, has another one of those “biggest laughs.” And SNL’s Michael Patrick O’Brien kills it in a one scene wonder as a long-suffering pizza guy.

The dialogue is snappy and fun, peppered with literary, historical, and pop culture references. And Wilde proves she has a knack for directing. Between the film’s rapid editing, stop motion sequences, long takes, and stylish sound mix, there is an unusual amount going on here for a teen sex comedy. Yes, you know where the plot is going. But there are still surprises to be found along the way. And when some of those expected beats come, they feel so earned as to be enjoyable enough to make sure the viewer doesn’t go “ugh…I knew that was coming.”

This is the teen sex comedy done right. Coming from someone who grew up watching the teen sex comedy genre religiously, I feel comfortable saying this is one of its very best additions. That genre was getting tired, and “Booksmart” proves that there is still a lot that can be done to freshen it up, so long as new voices are involved. “Booksmart” is a hilarious, touching love letter to friendship and academia. It may be rude and crude, but it deeply cares for its characters. It never bows to cynicism and boasts a refreshingly earnest optimism. It’s the perfect Friday night out laugh out loud comedy with enough real emotion to carry it above and beyond and it proves that Wilde, Feldstein, and Dever are not just the real deal, but cinematic forces to be reckoned with in the coming years.