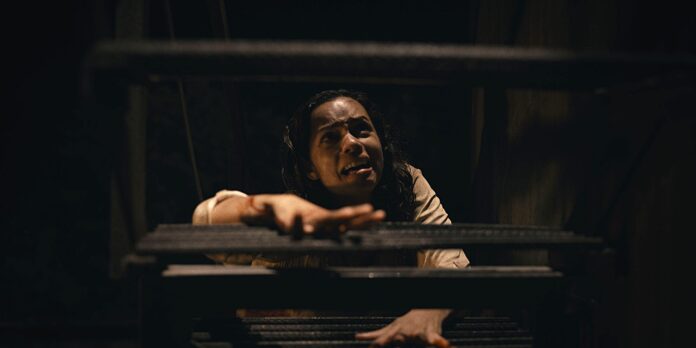 THE STORY – A young woman discovers the rental home she booked is already occupied by a stranger. Against her better judgment, she decides to spend the night but soon discovers there’s a lot more to fear than just an unexpected house guest.

“Barbarian” is a movie that’s essentially impossible to review. So why even bother? Discussing anything beyond the first 10-15 minutes of the film (when Georgina Campbell’s Tess and Bill Skarsgård’s Keith discover that the Airbnb both planned to stay at has been double booked) – which is all you’ve seen in the advertisements thus far – would ruin the brutal and bombastic brilliance of Zach Cregger’s sinisterly subversive screenplay. But word has to be spread about “Barbarian” regardless, as more need to be aware of the existence of one of the most audaciously original horror films of the 21st Century – and maybe ever. Believe me when I say that you’ve never seen a horror movie (or perhaps a movie in general) like this – one that almost instantaneously steers away from the potentially conventional and cliché plot that could’ve followed its shuddersome set-up in favor of persistently pulling the rug out from audiences every 10 minutes from there on out, until the very final frame. It’s impossible to become disengaged when watching “Barbarian” simply because you can never believe what’s unfolding before your eyes, and you have to see what happens next since, try as you might, there’s no way you’ll guess correctly. Such abrupt tonal and structural shifts may feel jarring in the moment, but when you view Cregger’s chilling vision in its entirety right before the end credits roll, you’ll realize it was all worth it.

You won’t hear a peep more about the plot from me, so let’s just get right into the meat of the review and survey what makes Cregger’s stupefying script so satisfying. As a fervent fan of the genre, I’ve seen my fair share of shitty horror movies in my life, and I’m no stranger to “shock jock”-esque screenwriters who throw a torrent of twists at audiences in under two hours simply to elicit as many screams as possible but lacking any rhyme or reason to justify such “scandalous” story turns. But with Cregger, even when you initially wonder where he’s going with all of this – or how he could possibly tie so many seemingly disparate story threads together – we realize by the final act that the man actually has a plan, and I can’t begin to tell you how refreshing it is to be in the hands of a horror auteur who actually knows what they’re doing. So often these days, fresh voices in horror think they can skimp on the story as long as they have a sexy visual style or “cool” cinematography (two things “Barbarian” also has, thanks to Cregger’s dark and deliberate direction and cinematographer Zach Kuperstein’s lush lensing). Still, at the end of the day, you can’t keep me captivated if your story is shit and nothing makes sense by your film’s finale. Here, the pieces of Cregger’s petrifying puzzle all begin to fall into place mere minutes before the movie’s chaotic conclusion, tying everything together with a terrifying bow and leaving us with a momentous message that shines a new light on the madness that preceded this payoff.

Through it all, even when we don’t know where things are going, we’re incredibly invested in Georgina Campbell’s Tess nevertheless, and Cregger – knowing how powerful a screen presence she has – relies on her reactions alone for much of the movie’s runtime, which proves to be a bet that pays off in spades. It’s not just the fact that Campbell has a face fit for the big screen (and is so in command of her craft and the calibration of her on-screen emotions that it’s almost as if its alchemy) but also that he has given her a considerately written character with a credible warmth and wit that not only makes her fun to root for but also refreshingly intelligent, too. I love a stupid horror stock character as much as the next genre devotee, but let’s face it – horror films are way more entertaining when the protagonist proves themselves to be actually capable of contending with the threat that’s trailing them instead of simple slasher bait. You don’t have to turn them into any sort of “superhero,” you just need to imbue them with some self-awareness so that there are genuine stakes here – and thankfully, Tess has just that, doing right by the best Final Girls that horror has to offer. Skarsgård and Long hold their own against her as well and are fantastic foils as she fends off the horrors that await under this Airbnb, but to say any more about their supporting roles – or the way they factor into the story – would be too much.

Technically, “Barbarian” is a real treat from top-to-bottom, too, even beyond Cregger’s direction and Kuperstein’s cinematography, thanks to some spine-chilling sound work, masterful makeup that would make Tom Savini squeal, and daunting production design that supports some of the horror genre’s scariest setpieces in quite some time. The film is engineered from every angle to give audiences one of the most raucous thrill rides in movies since the start of the 2000s – and maybe one of the most eerily consuming cinematic experiences of their whole lives – and I cannot even begin to emphasize how much Cregger delivers on his goals here, and how monstrously unprepared most moviegoers are for the horrors he’s manufactured in this ferocious fable. However, the real beauty of “Barbarian” isn’t how absorbing it is in the moment, but what the movie and its title actually mean when all is said and done. For a while, you’ll wonder what Cregger could’ve possibly intended with a title like that, but by the devilish denouement, the actual reasoning for making this movie comes to light, as we’re shown the barbarians in our own world, who might not look like the monsters we’ve made up in movies, but are something far simpler – and subsequently, scarier.

<b>THE GOOD</b> - This is one of the most audaciously original horror films this century (and maybe ever?), with a torrent of twists you'll truly never see coming, along with some sly and scorching social commentary to boot.<br><br> <b>THE BAD</b> - Some of the tonal shifts in the story can be a bit jarring, though they work better when audiences have the full view of Cregger's vision.<br><br> <b>THE OSCAR PROSPECTS</b> - None<br><br> ​ <b>​THE FINAL SCORE</b> - 8/10​"BARBARIAN"