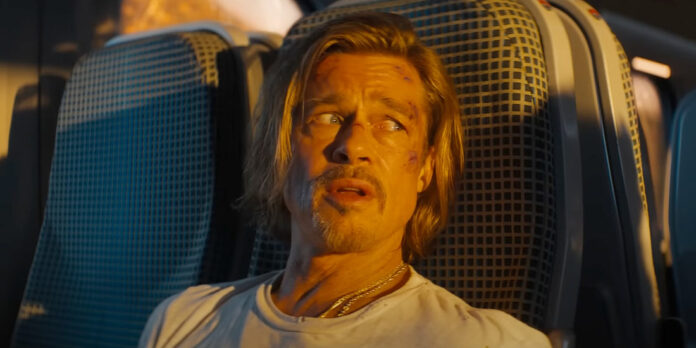 THE STORY – Five assassins find themselves on a fast moving bullet train from Tokyo to Morioka with only a few stops in between. They discover their missions are not unrelated to each other.
​
THE CAST – Brad Pitt, Joey King, Aaron Taylor-Johnson, Brian Tyree Henry, Andrew Koji, Hiroyuki Sanada, Michael Shannon, Benito A Martínez Ocasio & Sandra Bullock

Director David Leitch started his career as a stuntman working in numerous action films before becoming one of the go-to major studio blockbuster directors working today. He’s entertained audiences with his hard-hitting, hyper-kinetic, and well-choreographed action sequences in movies such as “John Wick” (which he co-directed) and “Atomic Blonde.” However, his past two films, “Deadpool 2” and “Fast & Furious Present: Hobbs & Shaw,” have injected more humor and a broader scope into the storytelling to appeal to as wide of an audience as possible. Some still love the approach he takes toward these more extensive projects. Others have cried foul. His latest film, “Bullet Train,” based on the Japanese novel “Maria Beetle” (published in English as “Bullet Train”) by Kōtarō Isaka, moves away from franchise filmmaking but retains all of the same qualities found in those last two films resulting in a wildly stylistic but frustrating experience.

A skilled but unlucky American assassin codenamed “Ladybug” (Brad Pitt) is at a point in his life where he wants to step away from the violent world he’s inhabited for many years. Taking on a more peaceful approach, he takes what appears to be an easy job from his handler “Maria Beetle” (a mostly off-screen Sandra Bullock) to retrieve a briefcase from a bullet train running from Tokyo to Kyoto. There are sixteen cars on the train, ten in economy and six in upper class, with only one-minute stops at each station. Ladybug forgoes bringing a gun on the job, but when he steps onboard, he gets caught up in a tangled web of other international assassins with their own goals, longstanding vendettas, and lots of dead bodies.

Brad Pitt is in pure goofball mode here as the peaceful middle-aged man who doesn’t want to hurt anyone (“Hurt people hurt people,” he says). His exasperated and exhausted outlook on the growing series of obstacles (a poisonous snake?!) is fun at first but increasingly becomes irritating as the plot grows more outrageous. His performance is similar to Channing Tatum’s in the “21 and 22 Jump Street” movies in that when he wants to be, he’s a complete badass, using every object at his disposal to incapacitate his enemies, and other times, he’s the butt of the joke due to his own zen-like mindset. At his age, Pitt continues to hold his own regarding the physicality demanded of him as he’s more than capable of still throwing and taking a punch and making it look good for the cameras. He’s still charismatic and cool as ever, but just when Leitch has found the appropriate wavelength to present this increasingly silly character, he pushes the tone too far, and the rest of the film follows suit, going off the rails, if you will, in the process.

Aaron Taylor-Johnson and Bryan Tyree Henry fare much better as two British assassins, codenamed “Tangerine” and “Lemon,” respectively. The two brothers (from separate mothers) have terrific banter together, even if the screenplay is sometimes a little too in love with itself as it attempts to pull off the “cool guy” dialogue found in Guy Ritchie and Quentin Tarantino crime films. Much of the film’s comedy and entertainment can be found whenever these two are on screen (Lemon has one re-occurring joke where he compares everyone to his beloved Thomas & Friends characters), including their one-on-one fights with Ladybug as Lemon takes him on in the “quiet section” of the train and Tangerine fights him until their brawl gets cut off by one of the train’s employees. The film is at its most clever in these moments where each assassin is desperately toiling to stay in the shadows and accomplish their goals with as little bloodshed as possible to not draw any attention to themselves. They go so far as to disguise a mostly useless character (Played by Logan Lerman) on the train, so no other passengers or employees will notice he’s actually dead. Benito A Martínez Ocasio aka. “Bad Bunny” (Playing an assassin known as “The Wolf “…because he howls like a wolf) and Zazie Beetz (Playing “The Hornet,” a killer who poisons her enemies) appear in pretty much one scene each for their respective fight scenes with Brad Pitt, while Michael Shannon’s appearance as “The White Death” (the big bad of this insane movie) is held off entirely until the third act. Sadly, none of them are around long enough to make a lasting impression. Much of their screentime is devoted to whatever aggressively shot and edited montage is used to introduce them to us. Joey King, however, makes the most of her screentime playing “The Prince,” a young British assassin posing as a schoolgirl who uses her perceived innocence to her advantage with mysterious intentions.

And then we come to the Japanese characters, which primarily consist of Andrew Koji (“Snake Eyes: G.I. Joe Origins“) as Yuichi Kimura. His role in the story is unclear at first, as the film opens with him discovering his son was recently pushed off the roof of a building and is now lying in a hospital bed. And then there’s the legendary Hiroyuki Sanada as “The Elder,” a Japanese assassin and Kimura’s father who has his own motivations for why he gets involved in the story, none of which is fully revealed until the third act. “The Boys” star Karen Fukuhara briefly appears as one of the train’s crew members but is of little to no significance to the plot. And this is where the topic of cultural appropriation and whitewashing comes into play. While it’s nice to have these actors involved in what is a Japanese story (and who doesn’t ever want to see Sanada cut people down with a sword?), it very much feels like a train robbery has taken place where a version of this story could’ve been told entirely from the Japanese perspective, using Japanese actors, and the result would’ve been more unique and less commercially driven. Yes, the cast consists of multiple nationalities with global appeal (and that’s probably what got the film greenlit in the first place), but to see the Japanese characters specifically get reduced to one-note roles in what is essentially their story speaks more to the Hollywood system of moviemaking today (suddenly, I’m having flashbacks to 2017’s “Ghost In The Shell“) despite the proven success of Asian-led blockbusters such as “Shang-Chi: The Legend Of The Ten Rings.”

The action in “Bullet Train” is exhilarating with tight editing, dynamic camera movements, and excellent stuntwork. There are plenty of laughs to be had, but for every joke that lands, there might be two or more which don’t. The film starts off incredibly clunky as it has to introduce many seemingly disconnected characters in a convoluted storyline where our protagonist, Ladybug, can’t even make sense of what exactly is happening as his uncomplicated mission abruptly goes off the rails, and the body count starts to rise. By the time we get to the third act, the screenplay doubles down on its ridiculous commentary on fate and karma (we even see the point of view an inanimate object such as a bottle takes at one point from the beginning of the movie until the end so we can see how it plays a role in the finale) to the point that any seriousness within the story’s other characters feels tonally out of place. It’s a frenetic barrage of silly gags and blood-soaked confrontations that may win you over by the end or may have you begging to be let off the ride.