“SEE HOW THEY RUN” 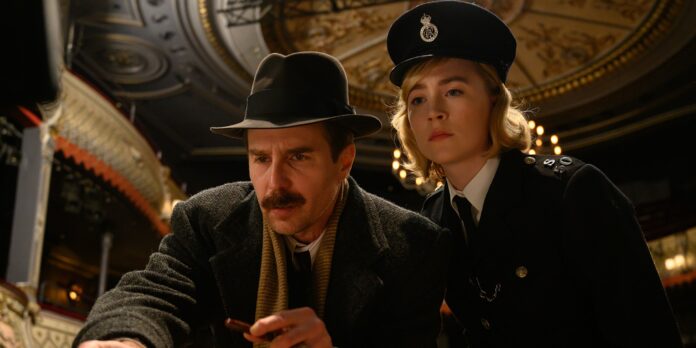 THE STORY – In 1950s London, plans for a movie version of a smash-hit play come to an abrupt halt after a pivotal member of the crew is murdered. When a world-weary inspector and an eager rookie constable take on the case, they find themselves thrown into a puzzling whodunit within the glamorously sordid world of underground theater, investigating the mysterious homicide at their own peril.
​
THE CAST – Sam Rockwell, Saoirse Ronan, Adrien Brody, Ruth Wilson, Reece Shearsmith, Harris Dickinson & David Oyelowo
​
THE TEAM – Tom George (Director) & Mark Chappell (Writer)
​
THE RUNNING TIME – 98 Minutes

Tom George’s feature directorial debut isn’t so much an adaptation of Agatha Christie’s world-renowned longest-running play “The Mousetrap,” but rather a tribute to the play’s ingenuity and influence on the “whodunnit.” In that vein, “See How They Run” presents itself as a clever murder mystery blending the contemporary entertainment of the genre’s most recent break-out hit, Rian Johnson’s “Knives Out,” with the slick production and quirkiness of a Wes Anderson film. Its meta storytelling only adds to the self-aware humor and fun as we follow the standard formula of a “whodunnit,” all the while the screenplay by Mark Chappell attempts to flip it on its head, boldly proclaiming in the beginning through Adrian Brody’s character Leo Köpernick’s voiceover, “It’s a whodunnit. You’ve seen one; you’ve seen them all.”

Taking place in London’s West End in 1953, Agatha Christie’s adored and revolutionary play, “The Mouse Trap,” is about to celebrate its 100th performance. Leo Köpernick (Adrian Brody) is a film director looking to turn the show into a film (despite him thinking it’s a “Second rate murder mystery”). He wants to produce a whodunnit unlike the thousands of others that have come before it (acting as a stand-in for Tom George himself?). However, he is attacked backstage in the costuming room by a masked man (or woman?) and is murdered and put on display on the stage for all to see. In comes Inspector Stoppard (Sam Rockwell) and Constable Stalker (Saoirse Ronan). The two are total contrasts of one another; she’s lively and energetic while he’s world-weary, unenthusiastic about the job, and a drunk. She jumps to conclusions too quickly, while he is patient and lets events play out, using his experience and intellect to solve the case at hand. Despite their mismatched personalities, together, they make an impressive team. As they investigate the show’s actors (including Harris Dickinson as a young Richard Attenborough) and other crew members behind the scenes, they begin to notice the Mousetrap is being somewhat imitated in real life by the killer.

“See How They Run” contains a multitude of twists and turns in its story that is rather fun to try and unravel as the movie wants to not only stay a step ahead of the audience but it also slyly reveals its hand early on, hoping that you won’t notice. It’s a tight-rope act George and Chappell are walking here as they risk robbing the story of its surprises in their attempt to overexplain the whodunnit genre, why it works, why it sometimes doesn’t, and why this one is different. What does work wholeheartedly, though, are the characters and performances from the cast. Sam Rockwell may have top billing, and he is a dependable anchor for the film as the mumbling, drunk detective with a dark past (we’ve seen this character type before), but the film belongs to Saoirse Ronan as Constable Stalker. As a self-expressed lover of the arts, she goes to the pictures quite often (even does a hilarious Katherine Hepburn impression) and thus knows all of the actors and other people involved in the case thoroughly well. Her lively personality results in her constantly making puns to make humorous light of the dark and entangled situation she and Stoppard find themselves in. She compulsively writes everything down in the notebook “only if it’s important,” but in a case like this, everything is important, so everything gets written down. She may talk a lot due to her nervousness (she has her sergeant’s exams coming up in a few weeks), much to the annoyance of Stoppard, but she has a good heart and is completely trustworthy. Ronan displays all of these traits with comedic precision, garnering the film’s biggest laughs and the audience’s sympathy. Her character is the kind that could inspire a whole new generation of younger women to enter a field primarily dominated by men, not lose sight of the qualities which make them uniquely likable, and still be just as capable as the men around them. Supporting performances provided by Adrian Brody, Harris Dickinson (who continues to showcase his limitless range), Ruth Wilson, David Oyelowo, Lucian Msamati, and one actor I won’t reveal otherwise, the ghost of Agatha Christie may come back and haunt me for ruining the third act, are all a lot of fun and a pure pleasure to watch as they flamboyantly deliver Chappell’s dialogue.

For a directorial debut, Tom George displays an impressive level of command over the storytelling. From the fancy editing (lots of use of split-screen) to the striking framing of many shots, all set across first-rate costume and production design work highlighting a range of pastel colors, his technical precision helps to give the film a light, bouncy, and vivid quality. While “See How They Run” may not redefine the whodunnit, it’s still an excellent example of why the genre has lasted for as long as it has and continues to find new ways to evolve and stay relevant for a modern audience as it eventually becomes a self-reflective commentary on how artists use other people’s pain and suffering to elicit emotions. Tom George and Mark Chappell are a perfect pairing of director and writer, making for one of the most assured and entertaining directorial debuts you’ll see all year. By the time the film reaches its satisfying conclusion with Hank Williams’ “I Saw The Light” playing over the final moments, hopefully, modern audiences will too see the light and realize that this beloved genre can still be set in the past, still contain the same tropes, and still be just as effective. It’s one of the breeziest watches you’ll likely have all year.