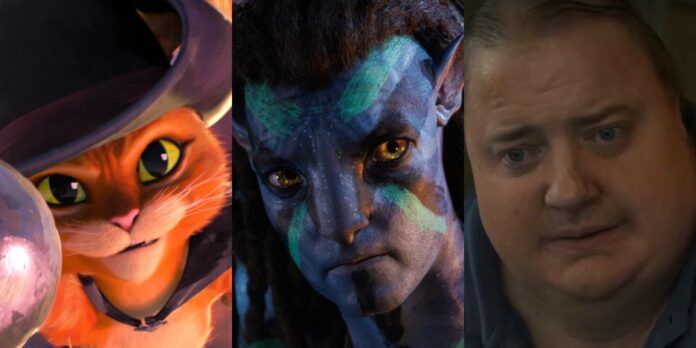 The Awards Audit is a weekly column at Next Best Picture where we dive into the financial performance of this year’s Oscar contenders and analyze how their results impact their prospects for this awards season. On this week’s awards audit, holiday holdovers displayed strong legs as the films jockeyed for position in several marquee Oscar races.

Similar to its monumental predecessor, “Avatar: The Way Of Water” is showing no signs of slowing down in its already-impressive box office run. The James Cameron-directed blockbuster actually enjoyed a 2% increase from its 3-day weekend gross from Christmas weekend, benefiting greatly from the extra demand during the holiday season. The long-awaited sequel also maintains a stranglehold on all premium theatrical formats, with this year’s Christmas slate lacking another big-budget blockbuster to bite into “Avatar: The Way Of Water’s” business.

With a worldwide gross of around $1.37 billion, “Avatar: The Way Of Water” seems guaranteed to reach $2 billion worldwide by the end of its run. I will not be surprised if the film remains in the top spot at the box office until the debut of M. Night Shyamalan’s “Knock At the Cabin” on February 3rd.

“Avatar: The Way Of Water’s” strong financial performance will only improve its award chances. The film is currently in line for Best Picture (ranked 5th by Next Best Picture) and Best Director (James Cameron ranked 5th by NBP) nominations, with Best Cinematography and Best Visual Effects looking like possible wins alongside a slew of other craft nominations. Word of mouth should remain strong enough for the sequel to stay relevant throughout the awards season, even if it’s not in the same hunt for a Best Picture/Best Director win as the original “Avatar.” It will be interesting to see if a critical backlash wave emerges against “Avatar: The Way Of Water,” similar to how “Avatar” was negatively impacted in 2009.

“Puss In Boots: The Last Wish” is perhaps the biggest benefactor of the Christmas holiday. The animated sequel enjoyed a 31% increase from last weekend’s performance, taking advantage of school vacation and the dearth of family-friendly offerings in the marketplace. In addition, glowing critical reviews (95% on Rotten Tomatoes) should allow “Puss In Boots: The Last Wish” to maintain relevance throughout January and February, even though the film is scheduled to hit VOD services on January 17th.

“Puss In Boots: The Last Wish” is also one of the several animated titles competing for a Best Animated Feature Oscar nomination. This year offers one of the most competitive slates of animated titles in some time, with Netflix’s “Guillermo del Toro’s Pinocchio” shaping up as the early frontrunner. Next Best Picture currently slates “Puss In Boots: The Last Wish” to be nominated (currently ranked 5th by NBP). However, if the film continues to perform well at the box office, it could be a potential spoiler to “Pinocchio’s” frontrunner status.

While both of these films experienced sleight drops from last weekend (a 10% drop for “Whitney Houston: I Wanna Dance With Somebody“ and a 24% drop for “Babylon“), neither title is connecting with adult audiences in the way that their respective distributors hoped. “Babylon” underperforming financially is not a huge surprise – it was always going to have a niche audience given its period-era subject matter and 3-hour plus runtime – but “Whitney Houston: I Wanna Dance With Somebody” is the type of traditional biopic that usually performs well this time of year. Both films are cautionary tales that highlight the difficult conditions facing adult-driven fare at the box office.

As far as awards go, “Whitney Houston: I Wanna Dance With Somebody” star Naomi Ackie is facing an uphill battle to get nominated for Best Actress (she’s currently ranked 8th by NBP). The movie is struggling to draw passionate responses from critics (hovering around 45% on Rotten Tomatoes) and audiences alike, and its lackluster box office results are not creating any positive momentum for the actress’ campaign.

On the other hand, “Babylon” still possesses some Oscar promise. Next Best Picture still sees potential in the film as a Best Picture (ranked 9th by NBP), Best Director (Chazelle is ranked 8th by NBP), and Best Actress (Margot Robbie is ranked 5th by NBP) nominee. However, those positions are on the borderline of missing, so it could go either way for Damian Chazelle’s divisive take on the silent film era. Robbie’s case is particularly fascinating as she vies against “The Woman King” star Viola Davis (currently ranked 6th by NBP) and whoever may receive a boost from next week’s SAG nominations. The consensus of positive responses for “The Woman King,” in particular, could allow Davis to vault Robbie once Oscar nominations are announced on January 24th.

Distributor A24 is playing their cards well with “The Whale.” The film experienced a 28% increase from last weekend’s nationwide debut without expanding into many additional theaters. A robust $2,135 per theater average is especially promising, showing enough box office potential to likely earn another major expansion in the coming weeks. The film is currently on pace to become A24’s fourth film this year to cross $10 million domestically – an impressive feat considering the lack of financial success stories that other specialty distributors can boast about.

“The Whale’s” healthy performance is a great boost for Best Actor Oscar contender Brendan Fraser. Once labeled as the frontrunner for the award, Fraser’s candidacy took a major hit once the film received mixed reactions from critics as it was opening in more theaters (it’s hovering around 65% on Rotten Tomatoes). Suppose Fraser’s performance can gain significant momentum with mainstream audiences. In that case, it might be a key catalyst for him surging ahead of current favorites, Austin Butler for “Elvis” and Colin Farrell for “The Banshees Of Inisherin.”

With 2022 officially over, we’ll be taking a bit of a hiatus with this weekly article series and come back post-Oscar nominations to examine the box office of the nominees and see if it will play a factor in any film’s awards season chances. Did you enjoying this weekly column series? Is there anything you would like to see in future posts? But also do tell us what you saw this weekend and what you thought of it. What will you be seeing next weekend at the theater? Please let us know in the comments section below or on our Twitter account.