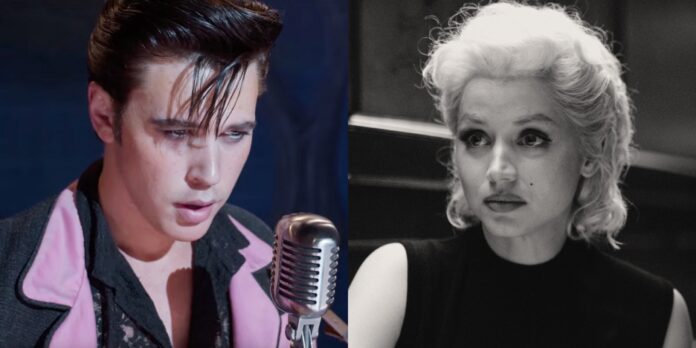 Elvis Presley and Marilyn Monroe are linked forever for redefining celebrity in the mid 20’th century and well beyond. As such, it is fitting that Elvis and Marilyn are linked together again in 2022 as the subjects of the two most polarizing biopics – if not most polarizing movies in general – this year. Yet while “Elvis” and “Blonde” could not be more different in style, intent, and audience courtship, they are two sides of the same coin in many other ways.

Elvis and Marilyn are American icons and creations in every way – the good and the tragic – but both “Elvis” and “Blonde” are the brainchildren of Australian directors. Both Baz Luhrmann and Andrew Dominik made highly stylized, eye-popping films that play fast and loose with history and iconography before. However, Luhrmann’s way of doing so in the likes of “Moulin Rouge,” “The Great Gatsby,” and “Romeo + Juliet” is worlds different than Dominik’s “The Assassination of Jesse James by the Coward Robert Ford.”

Likewise, Luhrmann’s “Elvis” is leagues different from Dominik’s “Blonde.” Yet, both have high ambition to separate their biopics from more traditional ones like “Bohemian Rhapsody” and “The Eyes of Tammy Faye.” However, Luhrmann separates “Elvis” from them with his usual breathless, sensory overload style of directing that turns into operatic tragedy. Otherwise, he follows the typical rise and fall, the greatest hits formula of biopics of past Elvis recreations to a T.

On the other hand, Dominik tries to reinvent the whole biopic wheel by turning Marilyn’s life into a fever dream – leaving aside how Pablo Larrain’s “Spencer” and “Jackie” did this sort of thing first. Nevertheless, “Blonde” is the furthest thing from “Elvis” and mainstream biopics by design, and not just for its debatable NC-17 rating. Yet both Dominik and Luhrmann go all out to make their biopics, and their respective takes on Elvis and Marilyn, look and feel nothing like the hundreds that came before them.

In this day and age of cookie-cutting filmmaking in all genres, it is tempting to laud them both for daring to be different. Yet only Luhrmann and “Elvis” have the box office momentum and the good enough reviews to be a potential awards season player, while Dominik and “Blonde” have become the scourge of certain sections of the internet this past week. This is because while “Elvis” and “Blonde” each try to put a new jolt in how we remember Elvis and Marilyn, only one of them seeks to make us remember their icon well.

“Elvis” perhaps goes too far in making us hero worship Elvis all over again, in downplaying the more insidious implications of his appropriation of black R&B music and in downplaying his initial romance with then 14-year-old future wife, Priscilla. But while Luhrmann glosses over the troubling parts of Elvis’s legacy to make us luxuriate in the good parts, Dominik glosses over the good and non-tragic parts of Marilyn’s legacy to make us luxuriate in the ugly, nihilistic parts – and outright make new ones up for good measure.

Luhrmann brushes past the least lovable parts of Elvis’s legend, though perhaps not as egregiously as other biopics have done with their subjects. Dominik goes above and beyond that standard, although he openly admits “Blonde” is not meant to be accurate, much like Joyce Carol Oates’ novel that inspired him. Yet glossing over seedy elements of a star’s life is one thing, and glossing over everything else in their life besides misery and tragedy – and making up new misery and tragedy out of the misguided belief that it alone equals brave and important art – is something else entirely.

Every possible double standard and misogynistic cliché can be used to explain why Elvis is so easily protected and defended and Marilyn is not. But perhaps the more basic excuse is that Elvis has a family estate to challenge any particular seedy treatments of him – regardless of how much truth is in it – and Marilyn doesn’t. The likes of Dominik and Oates have free reign to do what they want regarding Marilyn, while even someone as unrestrained as Luhrmann had to be conscious of what Priscilla and other Presley family members – and lawyers – would do if he went too far.

While Luhrmann gives Elvis’s gifts their proper due in showcase sequences, Dominik gives the appearance of nothing but contempt for Marilyn’s star-making films – even before he removed all doubt in a now infamous interview for Sight and Sound Magazine. While both Luhrmann and Dominik highlight that Elvis and Marilyn could have stretched even more as artists if they weren’t so typecast and exploited, only Luhrmann lets that tragedy breathe. Meanwhile, Dominik overwhelms it with fictional abortions and sexual assaults, and over-the-top daddy issues.

Both are guilty in the way of robbing Elvis and Marilyn of their own voices and their ability to tell their own stories, as so many did to them when they were alive and well after they died. With “Elvis,” Luhrmann not only tells it from the warped perspective of Elvis’s abusive and exploitive manager Colonel Parker, he pretty much makes the movie into the exact carnival spectacle Parker would have. That could somewhat be excused as a meta-commentary and satire. Still, Dominik can’t excuse himself that easily – though he certainly tries – for dragging Marilyn’s life and name through the muck, even more graphically than those before him did.

Both are guilty of hypocrisy, as they purport to decry how Elvis and Marilyn were exploited and reduced to stereotypes, yet do the exact same thing to them on different levels. They each clearly think they are making a larger statement about how America, Hollywood, and greedy men destroyed their icons’ careers and lives, though Luhrmann lays most of his specific blame on one man. Nonetheless, both fail to some degree to recognize the difference between condemning these tactics and wrongly inflicting them on their icons all over again. Yet Dominik does so to a far crueler, frequent, and nearly sadistic degree.

Then again, just as no anti-war film can probably be fully anti-war with its stunning and horrifying visuals, perhaps no biopic can be completely free of hypocritical exploitation and character reduction – no matter how different someone like Luhrmann or Dominik intends to be with the formula. Yet the best and most consistent artists split the difference as best they can, with the kind of delicate touch Luhrmann is almost never restrained enough to use and that Dominik almost wholly forgot he was capable of.

Yet it is obvious why “Elvis” is the movie with $150+ million domestic box office, dark horse Best Picture nomination hopes, and a path for Butler to get Oscar glory like Rami Malek, Jessica Chastain, Renee Zellweger, and other recent Oscar winners for ‘traditional’ biopics. Likewise, it is obvious why “Blonde” is the Netflix film whose standing with critics and true Marilyn fans has sunk by the hour and why de Armas’s path to salvaging Oscar recognition is narrowing as a result.

Compared with “Blonde,” “Elvis” shows how traditional biopic tactics can still deliver more entertainment value and appreciation for their subject than something more artsy and experimental in all the wrong ways. If that condemns critics and audiences for preferring something more sanitized and safe, as Dominik and “Blonde” defenders would likely think, it still doesn’t mean something more relentlessly brutal, unsafe and dreary is automatically more truthful and profound. But that is a symptom too many people and directors like Dominik believe across all genres as well.

Luhrmann knows his lane and uses “Elvis” to make it bigger, if not always better, than ever. Dominik either goes beyond his usual lane more than he should have with “Blonde” or is foolish enough to think what worked with one subversion of American iconography and celebrity would automatically work for another. But Marilyn Monroe is not Jesse James or Elvis, or vice versa.

As much as Luhrmann and Dominik work to redefine Elvis and Marilyn, they will be far from the last words on them. Inevitably, more Elvis and Marilyn biopics will come, though it is hard to imagine they will be more over the top in their own ways than “Elvis” and “Blonde.” Maybe future Elvis projects will get to be less hagiographic, and perhaps “Blonde” will inspire someone with a more fully formed perspective on all of Marilyn’s life to do her more justice next time. If Elvis and Marilyn’s legacies have meant anything since the 1950s, it is that no one will ever run out of things to say or meanings to make up about who they were and what they really represented any time soon.

“Elvis” and “Blonde” are the latest and perhaps most exhaustive proof of that yet, whether one sees them as triumphs or cautionary tales of their genre. Just as Elvis and Marilyn themselves had little in common but were linked together forever anyway, so may “Elvis” and “Blonde” be linked together in 2022 and beyond, despite being so different and being two sides of the same coin all at once.

Yet while “Blonde” has the majority of hatred in certain online and critical circles right now, “Elvis’s” will surely go through that ringer all over again soon enough, depending on how the Best Picture bubble and the Best Actor race shakes out. Either way, neither one of them will get out unscathed in some way – and with their subjects, directors, and respective extremes in biopic storytelling, perhaps they were never meant to.

Have you seen “Elvis” or “Blonde” yet? If so, what did you think? Do you think either will be Oscar contenders this year and if so, in which categories? Please take a look at the Next Best Picture team’s Oscar predictions here. and let us know your thoughts in the comments section below or on our Twitter account.