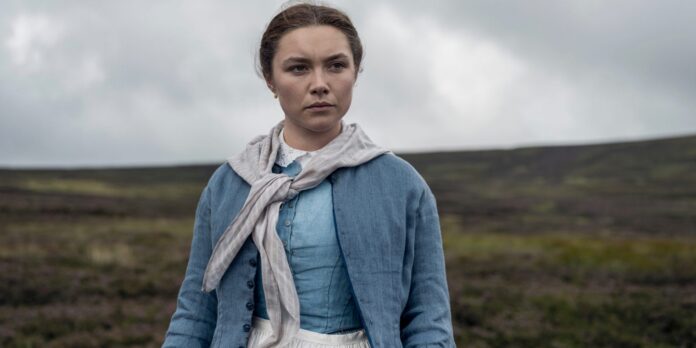 THE STORY – Set in The Irish Midlands in 1862, the story follows a young girl who stops eating but remains miraculously alive and well. English nurse Lib Wright is brought to a tiny village to observe eleven-year-old Anna O’Donnell. Tourists and pilgrims mass to witness the girl who is said to have survived without food for months.

Sebastián Lelio’s (“Gloria Bell“) new film, “The Wonder,” begins by showing a modern film set before transitioning us into it. Now, we’re in the world of nineteenth-century Ireland, the setting for “The Wonder.” It’s an unconventional and perplexing way to begin a period drama, pointing out the artificiality of the world being created for this particular story. However, by the time we return to the soundstage at the end of the film, there is more clarity to its purpose as much of “The Wonder” centers around performance – the performance of miracles, religion, and of faith.

Lelio’s film is adapted from Emma Donoghue’s novel (writer of “Room“) of the same name, with a screenplay by Lelio, Donoghue, and Alice Birch. Florence Pugh plays Elizabeth “Lib” Wright; a young nurse brought from England to help verify the authenticity of a small Irish town’s miracle child. Anna, played by newcomer Kíla Lord Cassidy, is a local eleven-year-old who has reportedly not eaten in four months. She and her family insist that it is due to her faith, and she has become a draw for religious tourists. Several of the town’s leading men, including the priest (Ciaran Hinds) and doctor (Toby Jones), have commissioned The Watch. Lib, an experienced nurse who worked with Florence Nightingale during the Crimean War and as a nun, will take turns watching Anna and give a report on how she survives without food. As Lib and Anna grow closer, the older woman becomes concerned about the young girl’s health and how far she and her family are willing to go to maintain this proof of a miracle.

Particularly visually striking are the hazy scenes in which Lib takes doses of laudanum to be able to sleep. Dealing with losses in her past, she is concerned that her young charge will die and is frustrated that no one around her seems to care. She thankfully finds an ally in a journalist, William Byrne (Tom Burke), who has come from London to report on the case and firmly believes that there’s trickery going on. He urges Lib to find out the truth and not get brought into the illusion and provides an interesting perspective on the wonder child and the village. However, the romance between William and Lib is rushed and unfulfilling.

All of the other performances in the film are dull compared to Pugh and Cassidy, who perfectly match each other’s intensity to the point that it becomes a battle of wills between the two. Cassidy does incredible work, especially for a young child performer, and perfectly demonstrates Anna’s religious fervor with something unsettling lurking beneath the surface. Pugh gives some of the best work of her already impressive career, reminding audiences how excellently well-suited she is for period dramas as she was in “Lady Macbeth” and “Little Women.”

However, one of the most impressive elements of the film is its world-building, perfectly situating the audience in Ireland in 1862 – a staunchly Catholic land still ravaged by famine years before. The film takes on the air of a gothic thriller, with a foreboding score by Matthew Herbert and haunting cinematography by Ari Wegner. The production design by Grant Montgomery is stunning in its minimalism, particularly combined with the way the sets are lit to cast shadows across rooms, just as Lib casts doubts on Anna’s family’s assertions. The costumes by Odile Dicks-Mireaux, and the hair and makeup are not only beautiful (especially Lib’s contrasted blue dress against the grim landscapes) but also refreshingly period-accurate.

“The Wonder” portrays a conflict between faith and science, but it is never outright dismissive of religion itself. It’s more interested in critiquing the sort of religious fervor that can become dangerous and how religion can be used to oppress those who are already weak. Religious imagery and nearly frantically whispered prayers eventually give way to an understanding of how a young girl’s faith has been used to punish her. It all creates a thematically rich and engaging story backed by a strong lead performance and impressive technical craftsmanship.

Lelio’s previous movies like “Gloria,” “A Fantastic Woman,” and “Disobedience” all highlight strong women, so it is no surprise that he was drawn to this story, which essentially shifts to be a story of women’s liberation from religious martyrdom. Inspired by the actual “fasting girls” of the Victorian era, Anna’s condition remains a mystery throughout much of the film. However, Lelio and Donoghue aren’t just interested in what Anna is doing; they grapple with why she’s doing it and what could push a young girl to such extremes. As such, “The Wonder” is a cautionary tale about the power of religion but also provides a Gothic heroine who is determined to change the narrative.