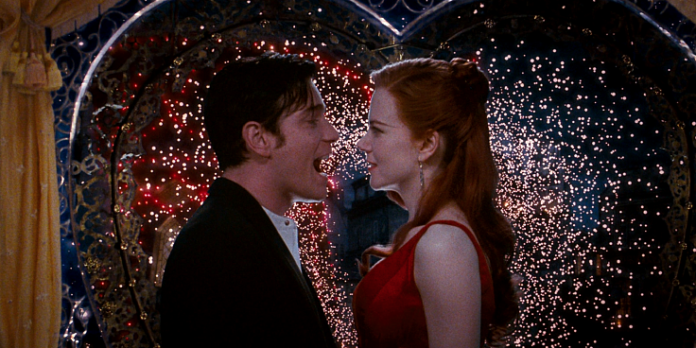 THE STORY – A celebration of love and creative inspiration takes place in the infamous, gaudy and glamorous Parisian nightclub, at the cusp of the 20th century. A young poet (Ewan McGregor), who is plunged into the heady world of Moulin Rouge, begins a passionate affair with the club’s most notorious and beautiful star (Nicole Kidman).
​
THE CAST – Nicole Kidman, Ewan McGregor, Jim Broadbent, John Leguizamo, Richard Roxburgh & David Wenham

In the decades leading up to the year 2001, the movie musical had been all but considered dead. The role of musical numbers in film had transferred over to animation studios such as Disney who used the tool to great critical and commercial success. Any other filmmaker would have made a “safe” musical by adapting a pre-existing work or by sticking to the genre’s conventions. But Baz Luhrmann is no ordinary filmmaker. Instead, he created a big, colorful, wildly entertaining roller coaster of an experience that announced to the world that the movie musical was back. He gave us “Moulin Rouge!.”

It’s the year 1899 and penniless Christian (Ewan McGregor) has defied his father’s wishes to come to Paris in order to become a writer. He meets a group of unusual artists, actors, and performers headed by Toulouse (John Leguizamo). They are attempting to sell a show to the underground, sex filled, wild nightclub, the Moulin Rouge run by Harold Zidler (Jim Broadbent). Christian decides to become their writer but in order to sell the show, he will have to pass himself off as a Duke and court the lovely Satine (Nicole Kidman) who is the premiere performer at the Moulin Rouge. After mistaking him for the real Duke (Richard Roxburgh), Satine tries to push Christian away, but they instead fall in love despite the powerful and extremely jealous Duke’s affections towards Satine.

“Moulin Rouge!” is divided into two halves. The first half follows Christian as he makes his way into the Bohemian Revolution meeting an eccentric bit of characters whose quips and actions are as fast paced as the film’s whip-fast editing. The humor is absurd and the characters are strange, but we grow to love them due to their idealistic view of believing in “truth, beauty, freedom, and love.” The second half veers into the dramatic territory for Christian, as his affair with Satine becomes increasingly difficult to hide from The Duke. It’s clear that Baz Luhrman is a lover of the theater and wants to pay tribute to the arts of comedy vs. drama, but there are times where the rapid tonal changes can come along a little too forceful and not as gradual. The film slides back and forth from a comedic musical number such as “Like A Virgin” to an overly dramatic version of “Roxanne” without warning and will surely help to create detractors to the film’s wild indulgences.

You may have noticed that the two songs mentioned above are actually famous pop songs from our own history. These are not original songs created for the film, but renditions which seem to be a tool used by Luhrmann to create a familiar sense of ease for the casual viewer who is not so heavily invested in the musical genre. The actors all do a fine job with their songs with Ewan McGregor being the clear standout as far as range goes. But kudos do need to be paid to Nicole Kidman who completely throws herself into the role of Satine. She may not have as powerful of a voice as McGregor but she certainly brings the necessary dramatic beats to the role (Especially when the tears start to flow). When these two share the screen and blow out powerful songs such as the film’s only original piece “Come What May,” the results are outstanding. The rest of the cast looks to be having a blast with Jim Broadbent in particular relishing in playing the overprotective watcher of Satine and the Moulin Rouge, Harold Zidler. However, it’s the distractingly awful acting of Richard Roxburgh as the Duke that takes the film down a notch. While everyone seems to be striking the right balance between absurdity and gravitas, Roxburgh is on a whole other level, overacting every emotion, and delivering each line with the worst form of theatricality. It’s the only performance amongst a talented cast that simply doesn’t work.

Luhrmann’s film has the ability to transport us to a world that at times feels normal, but will intoxicate you with its dreamlike visuals and influences. The design elements on this film are (To borrow a phrase from Harold Zidler) “Spectacular, spectacular!” The film rightfully won two Academy Awards for its design elements in costumes and art direction. The vision on display by Baz Luhrmann is grand in its scope and absolutely insane in certain scenes, one of which involves Christian and his Bohemian gang drinking a bottle of absinthe and imagining a green fairy singing to them. “Moulin Rouge!” can get quite messy at times (The editing of this film never slows down, not even for the intense dramatic scenes), but it’s bold and daring, which deserves to be signaled out.

The story of two lovers from two totally different classes falling in love where it is forbidden is deceptively simple and certainly nothing we haven’t seen before. This, coupled along with your pre-conceived prejudice towards musicals and Luhrmann’s hit or miss (Depending on your taste) direction may leave you walking away from “Moulin Rouge!” wondering what all of the fuss was about. Despite all of those possible listed issues, such original work should be admired despite a few minor stylistic errors along the way. It certainly won’t be for everyone and due to the film’s success there have since been a number of Hollywood movie musicals to come along that may fit your tastes better. But “Moulin Rouge!” is a superb film that deserves your attention and hopefully (When the final credits roll and the curtain falls down), applause as well.