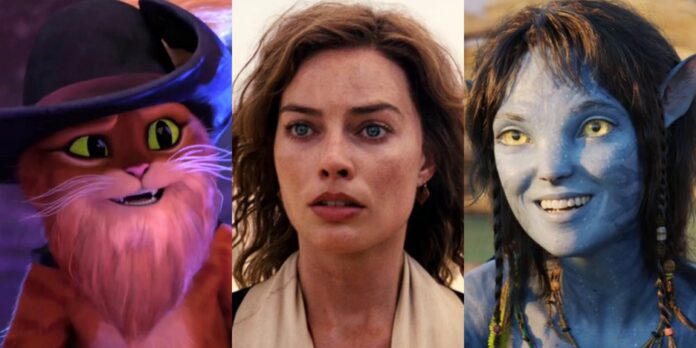 The Awards Audit is a weekly column at Next Best Picture where we dive into the financial performance of this year’s Oscar contenders and analyze how their results impact their prospects for this awards season. On this week’s holiday edition of The Awards Audit, “Avatar: The Way Of Water” continued its dominant run against an underwhelming slate of new and expanding releases.

One important point to note before we delve into the analysis: the holidays are not a traditional time at the box office. The post-Christmas week is one of the most active times of the year for theaters, which allows some releases to gain momentum and develop into profitable hits despite initial struggles out the gate. 2017’s “The Greatest Showman” is a key example of this, going on to amass $174 million domestically after a $19 million gross in its soft long-weekend launch. A quiet Christmas weekend opening should not be considered a box office death sentence for every film.

For the slew of award hopefuls out in theaters this weekend, some will gain traction during this holiday frame, while others will continue to flounder. Now let’s dive deeper into each holiday title.

Some claimed that James Cameron’s long-awaited “Avatar” sequel, “Avatar: The Way Of Water,” underwhelmed in its box office debut last weekend. Well, those cynical outlooks are not looking too fruitful as the film is already on the doorsteps of $300 million domestically and $900 million worldwide. The over three-hour-long epic action film is dominating mainstream attention, with the title’s strong word of mouth and complete control over premium theater formats continuing to drive interest.

It’s important to note that this is likely just the beginning of “Avatar: The Way Of Water’s” box office dominance. During its record-breaking box office run, “Avatar” mopped up during the slow post-holiday months. With 2023’s January slate looking fairly meager, Cameron’s latest should hold comparatively to its predecessor and remain a force at the box office. Will this sequel break all of “Avatar’s” box office records? Probably not, but it should still be a smashing success that will likely reach the $2 billion mark worldwide.

“Avatar: The Way Of Water’s” strong financial performance will only improve its award chances. The film is currently in line for Best Picture (ranked 5th by Next Best Picture) and Best Director (James Cameron ranked 5th by NBP) nominations, with Best Cinematography and Best Visual Effects looking like possible wins alongside a slew of other craft nominations. Word of mouth should remain strong enough for the sequel to stay relevant throughout the awards season, even if it’s not in the same hunt for a Best Picture/Best Director win as the original “Avatar.”

As the long-awaited return of a Shrek fan favorite, “Puss In Boots: The Last Wish” performed promisingly in its holiday opening. I’ve seen some air caution that this debut trails the domestic opening of another 2022 Dreamworks Animation title, “The Bad Guys” ($23.9 million), although that concern does not take into account the holiday schedule’s impact.

“Puss In Boots: The Last Wish” is set up to perform well in the long haul. Last year, “Sing 2” enjoyed a $39.6 million extended opening before earning $162 million domestically and $407 million worldwide. While “Puss In Boots: The Last Wish” won’t reach those figures, don’t be surprised if the sequel can get near $120 million domestically. In addition, January offers no other family-friendly release, which should allow the well-reviewed sequel to remain a staple in theaters over the coming weekends.

“Puss In Boots: The Last Wish” is also one of the several animated titles competing for a Best Animated Feature Oscar nomination. This year offers one of the most competitive slates of animated titles in some time, with Netflix’s “Guillermo del Toro’s Pinocchio” shaping up as the early favorite. Next Best Picture currently slates “Puss In Boots: The Last Wish” to be nominated (currently ranked 5th by NBP). It will be fascinating to see how Dreamworks handles this award season, given “The Bad Guys” and its similarly promising award prospects (ranked 6th by NBP).

“Whitney Houston: I Wanna Dance With Somebody”
$6.8 million domestically in its 3,625 theater debut

The Whitney Houston biopic (originally titled “I Wanna Dance with Somebody” but then oddly re-titled at the last minute as “Whitney Houston: I Wanna Dance With Somebody“) opened with mixed results over the holidays. The title failed to meet distributor Sony’s pre-release tracking of $12 million and garnered unimpressive reviews (46% on Rotten Tomatoes). Still, the film should boast strong legs over the next few weekends. Music biopics typically hold well, as adult audiences generally don’t rush out during opening weekend for these movies. I expect “Whitney Houston: I Wanna Dance With Somebody” to get close to breaking even with its $45 million production budget domestically. However, this particular biopic is not the breakout success Sony likely envisioned. A final domestic gross in the $30-$35 million range seems likely.

“Whitney Houston: I Wanna Dance With Somebody’s” sole Oscar chance is a Best Actress nomination for star Naomi Ackie (ranked 8th by NBP). Ackie does deliver an aching portrayal that conveys Houston’s effervescent star power. Still, her performance likely needed the support of favorable reviews or glowing audience word of mouth to land a nomination. We will see in the coming weeks if “Whitney Houston: I Wanna Dance With Somebody” can course correct its underwhelming opening.

“La La Land” Director Damien Chazelle’s $110 million deep dive into the silent film era is already being labeled a box office bomb after its uneventful debut. While other holiday releases have a chance to make up ground over the coming weeks, “Babylon’s” fate seems unfortunately set in stone.

“Babylon’s” unsuccessful opening weekend is already generating busy conversation about the film’s financial failures. While divisive reviews (it’s currently rotten on Rotten Tomatoes at 56%) and an ineffective marketing campaign played their part, “Babylon” is an ambitious, auteur-driven release that would struggle to connect with the mainstream in any circumstance. It’s a hard sell to ask viewers not infatuated with old-era Hollywood to go out and see a 3-hour epic that does not conform to conventional film sensibilities. I praise distributor Paramount for greenlighting a pricey film that boasts worthwhile ideas on Hollywood’s degrading culture. Still, even they likely knew this would not be a substantial moneymaker.

Unfortunately, “Babylon’s” award prospects are looking similarly dim. Next Best Picture still sees potential in the film as a Best Picture (ranked 9th by NBP), Best Director (Chazelle is ranked 8th by NBP), and Best Actress (Margot Robbie is ranked 5th by NBP) contender. That said, the bad headlines swirling around “Babylon” will likely reduce its chances as other titles gain momentum over the coming weeks. It will be fascinating to see where the (also) over three-hour-long film shakes out when Oscar nominations are announced on January 24th.

As the discourse around “Babylon” continues to get more volatile, I want to remind readers that a lack of financial, critical, or awards success does not define a film. Chazelle’s ambitious approach will likely be rediscovered as a cult classic in the future, especially given the film’s passionate response from those who really adore it.

Over its first two weekends, “The Whale” dominated the specialty market, including opening with the best debut of the year for a limited release. Distributor A24 wisely tried to parlay the film’s initial success with a nationwide expansion this weekend.

The results are relatively modest. A $1,527 per theater average is respectable when considering the crowded holiday marketplace, but it’s abundantly clear the film is not translating its headline-grabbing initial results into significant mainstream interest. That’s not particularly surprising. The movie is a somber and subdued chamber piece, and while a buzzy performance from Brendan Fraser draws some interest, it’s not enough to mask the film’s inherently niche qualities.

This expansion is still profitable enough for A24 to retain its theaters and possibly add more in the coming weeks. Fraser also remains a Best Actor Oscar contender. However, his status as the de facto frontrunner has all but evaporated (he’s currently ranked 3rd by NBP). It will take the film gaining some momentum theatrically for Fraser to retain his former status.

With 2022 coming to an end, we have one more column left for you all next week before we turn our eyes towards 2023. Here’s what’s to come next weekend with the holdovers from this week:

Are you enjoying this weekly column series? We’ll continue to deliver this new analysis to track how this season’s awards contenders are doing at the box office for a few more weeks until this year’s crop of Oscar contenders stops releasing in theaters. Is there anything you would like to see in future posts? But also do tell us what you saw this weekend and what you thought of it. What will you be seeing next weekend at the theater? Please let us know in the comments section below or on our Twitter account.