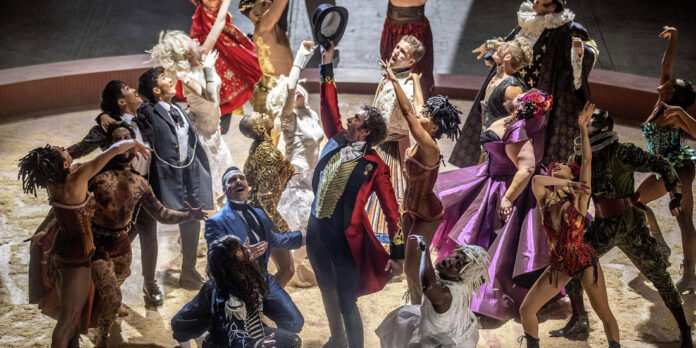 THE STORY – Inspired by the imagination of P. T. Barnum, The Greatest Showman is an original musical that celebrates the birth of show business & tells of a visionary who rose from nothing to create a spectacle that became a worldwide sensation.

​“…and buried in your bones there’s an ache that you can’t ignore, Taking your breath, stealing your mind. And all that was real is left behind.”

Uhh yeah, wanna know what’s buried in my bones? The urge to bust out in song and dance while watching Michael Gracey’s “The Greatest Showman.” Gracey’s musical biopic belts and spins its way into movie theaters this weekend and boy is it quite the spectacle. “The Greatest Showman” does not necessarily present anything new or unique in its execution but it is still one heck of a good time for the whole family. From the massive set pieces that would be grand enough to make Barnum himself smile, to all of the colors that shine just as bright as the ensemble, although the story is hardly a story and there is no real tangible plot, the film instead focuses on a handful of emotions and themes. It is a film dedicated to delivering one message; “don’t be afraid to be yourself.” “The Greatest Showman” is not a perfect film by any means but it is fun to turn your brain off for about two hours and just watch some singing, dancing, spectacle, and butchering of history.

Depicting the rise of P.T. Barnum (Hugh Jackman), “The Greatest Showman” is a two-hour tour of Barnum’s constant strives to be loved by the entire world. He has everything he needs from being married to the woman he’s been in love with since he was a child, Charity Barnum (Michelle Williams), to two lovely daughters who love him unconditionally. But as the film states, that is not enough for the towering icon that is P.T. Barnum. No, he wants the fame, the glory, and the riches. His solution to achieve all of this is to open up a circus. Bringing together a group of magnificent people, Barnum and his crew create one of the greatest shows to ever grace the planet. All of this to say, the film does not accurately depict the history of who the real P.T. Barnum really was but what the film does set out to do for its intended audience, it does well.

Barnum sees constant struggle to keep the show up and running when he is torn down by a critic and a mob of citizens who think that Barnum and his “freaks” should leave New York. Despite all of the negativity aimed toward the show, Barnum keeps his doors open because even though there are people who despise them, there is still a massive crowd of people who adore them. I suppose the goal that Barnum possesses is to be loved by everyone? But that kind of gets lost beneath the musical numbers and heavy spectacle focus. But even if there is a goal that can be discovered for Barnum there still is not necessarily a beginning middle and end. Events just kind of happen with no real rhyme or reason. There never is any build up or pay off within the film as every scene just comes and goes. This is probably due to how easily digestible the plot is and how there is not much to read into with it or its characters and their motivations. One thing that makes a great musical stand the test of time is that serves two whole purposes. One being that it tells a compelling and interesting story. Now usually that story tends to be about a relationship of some sort and I guess this story is about Barnum’s love for show business versus his love for his family? Anyway, the second thing should be to offer up some flawlessly executed musical numbers. “The Greatest Showman” really only gets a small part of one of those things right.

But aside from poor storytelling choices and some questionable characters, the film does manage to be quite a bit of fun. The musical numbers are grand and indulgent. Popping with every color in the spectrum, sweeping camera moves (Cinematography provided by the great Seamus McGarvey), with some downright delightful costume design, Michael Gracey does one fine job with his debut on a technical level. The songs are written by Oscar winners Benj Pasek and Justin Paul, the lyricists for Damien Chazelle’s “La La Land” and the Emmy winning “Dear Evan Hansen.” While the set pieces for the numbers are massive in scale, the songs themselves are a tad simplistic. Even though they make you want to sing your heart out and dance along as hard as your legs can go, the songs are a bit basic. But if “The Greatest Showman” was just aiming for something simple, fun and joyous that the family can enjoy over Christmas, then by golly they achieved it.

Another thing that puts quite a smile on the face of the audience is the brightness illuminating from Hugh Jackman. While this far from Jackman’s best performance, we can clearly see how much fun he had making this film. After all, it is his passions project as he has been striving to get it made since 2009. Jackman is colorful, big, and most of all eccentric which is exactly what is needed for someone like P.T. Barnum. Proving to be definitely his zaniest performance to date, this is definitely a much more happy performance than his in “Logan” or in another musical film such as “Les Miserables.”

“The Greatest Showman” is a film that does not necessarily set out to do anything different. It prefers to stay in the middle of the road instead of landing among the all-time greats. Perhaps if it tried to tell more of the truth behind who P.T. Barnum really was, we would’ve gotten a unique musical to rank up with all-time greats. Instead, with an eccentric performance from Hugh Jackman that is catered by the downright catchy musical bits, the film is one made to simply be enjoyed. Though once you begin to look beneath all the singing and dancing there are quite a few flaws. Some characters make some questionable choices that are not necessarily warranted and the story is as formulaic and predictable as they come. “The Greatest Showman” certainly has some spectacle to enjoy but does not hold much of anything else.